Yes, milk again. If you'd noticed, I actually consciously stopped talking about milk for sometime. Was thinking that it was probably very boring for you guys to keep reading about me and my milk obsession. Yes, I would call it an obsession. hahaha but then again, I realise that milk is a major obsession with breastfeeding mums. We talk about milk all the time. How much milk we're expressing; how often we express; how to increase milk supply/production; etc etc... We're mad about milk!!! hahaha...

So, anywayz, when I last left you on my milk status - I was running short on milk, right? At least, I thought I was. That was during a period of time that I was quite stressed due to the following reasons

1) Isaac started to want to drink at almost every hour every evening.
2) I was faced with the possibility of going back to work in 2 weeks and had yet to build up a store of milk in my freezer - in case I couldn't pump enough to fulfill his needs when I went back to work.
3) I stopped seeing my milk gush out in spurts like it used to when I pumped.

It didn't help that I was stressed - coz then I started to get paranoid that my supply was dropping etc etc... so I actively emnbarked on a quest to increase my milk supply. I surfed the net and mothering forums for tips. Started smsing and msning all my breastfeeding mother friends. And most of all, I started pumping and pumping and pumping.

Which was initially a problem for me. Coz I didn't have time to pump. Coz I was taking care of Isaac alone at home, and he always wants to be carried all the time. Hence, I hardly had the time to pump after feeds as I would almost always be trying to rock him to sleep in my arms. Also didn't have time to wash and sterilise the pump and bottles. Then I leanrt from other bf-mums that one can pump one side while having the child latch on on the other breast.

And so I did that! I started to pump the other side whilst Isaac latched on. It helped tremendously that I happened to have two manual pumps. Thus I could prepare a pump, all sterilised, standby beside the bed, so when Isaac wakes up for a feed, I can immediately latch him on, and yet have the pump right there for me to pump the other side. And after he settles and I can get away, I can wash and sterilise the used pump, and take the 2nd sterilised pump out of the steriliser to standby for my next pump! This was how I pumped my way through the past month at wee hours of the morning. (couldn't and wouldn't pump in the afternoons and evenings as he was still drinking hourly and I didn't wanna have another incident of flat, empty breasts vs hungry baby again.)

As I was still feeding Isaac directly - ie. latching him on - anything that I pumped was literally surplus. By pumping whilst I fed him, I was actually telling my body to produce enough milk for twins. I proceeded to freeze the milk that I expressed - the Expressed Breast Milk (EBM) - a nice breastfeeding term for milk that was squeezed outta our boobies. [Breastfeeding Mum Joke 3: How do you know a mother is breastfeeding her child? When she is very EXPRESSIVE!!! hiak hiak hiak...]

For those not in the know - frozen EBM can be stored for up to 3 months in the freezer, and 6 months if you have a deep freezer. Thus, I started to store frozen EBM. In milk bags - small plastic bags that are pre-sterilised. And today, about a month after I actively started to express and store milk, this is what our freezer compartment looks like (plan/top view) 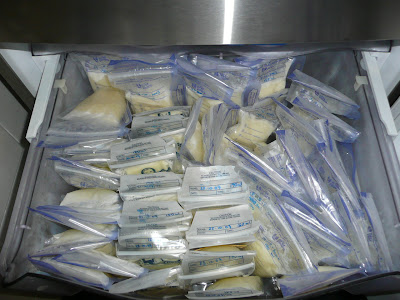 That's more than 60 bags of EBM we have in the freezer, and we're running out of space!!!

Guess I had milk afterall ;p