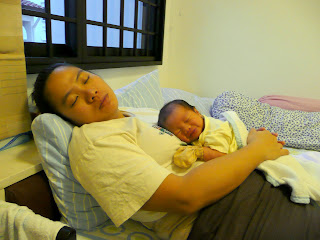 This is a picture of me and Isaac on 18th August 2007 - 12 days after Isaac was born. How'd I look? FAT, right? well, it WAS just 12 days after I delivered... (trying to console myself ;p)
Anywayz, what I wanted to say was... to complain and let of steam rather, was... that my mother-in-law keeps calling me TE-BOR (read in Teochew or Hokkien) - it literally means PIG-MOTHER (Mother Pig) - though what she really means is "Mother of the Pig" - since Isaac is born in the Year of the Pig.
But it is sooooo irritating!!! Wah lioaz, she keeps on calling me te-bor te-bor... urrghhh... never in my life (fat as I was) have I ever been called a PIG. Now, best - MOTHER PIG somemore. *roll*eyes*
Hiaz, but what to do, it would appear that I am certainly now a mother pig - since I am the mother of a PIG. *roll*eyes* so you see this picture, looks perfect doesn't it? A perfect picture of the Mother Pig and her Piglet. I certainly look humongously FAT here, no doubt about that!
hmmm... come to think of it... since this year is the Year of the Golden Pig - does that make me a KIM TE-BOR??? (Golden Mother Pig?!)
HAHAHAHHAA...
P.S. Hey! No offence against all those who ARE born in the Year of the Pig yeah?! Just thought this would make a hilarious post. Though it really IS quite irritating of my mother-in-law to keep calling me a Mother Pig - I'm half-amused, half exasperated by it, I guess. Well, in fact, the chinese do consider the Pig Year a good year tohave babies - in fact, this year, being the Year of the Golden Pig - is supposed to be a fantastically excellent year to have a little one! I have soooooo many friends and acquaintances who are pregnant! sighz!!! Next time, registering for school will be a big problem!!! jialatz!!!
Posted by Pamela at 12:51