We brought Isaac for his 2nd immunisation jab on Friday afternoon. He weighed in at about 6.9kg, and measured 61cm long/tall! (always dunno to say long or tall! hahaha) Isaac is 14 weeks old.

We kinda thought he was big for his age. I mean, not huge, but above average, ya know. But paedeatrician (commonly known as PD) says he's at 50th percentile - i.e. AVERAGE.

Hubbs however, doesn't mind that Isaac gets a little chubby. Coz he figures that as Isaac has his genes, Isaac might lose his baby weight very quickly and become a skinny lamp-pole like his Papa. Or as we call hubbs - the bottomless pit.

Which I think is good what. I mean, to be able to eat all you want and all you can and NOT be FAT?! wow! Gimme that anytime, man!!!

But in the meanwhile, since we dunno whose genes Isaac will inherit for his weight profile - I think we should err on the side of caution and keep him average, yah? :) 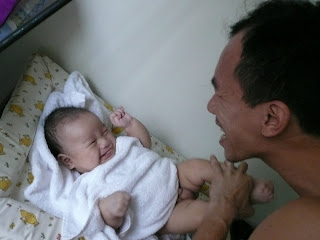