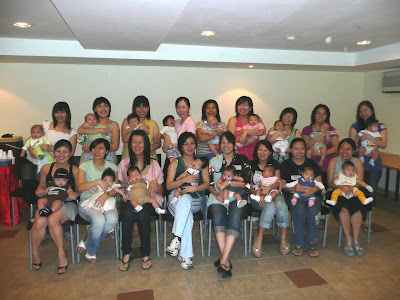 On Saturday just past, we had an August 2007 Mummies Gathering! We're mummies from the SingaporeMotherhood Forum - August 2007 MTB thread. See, that's all of us above, with our babies. A pity some mummies left before we took the picture.

It was quite an interesting experience, this gathering of forummers. It's like we all kinda knew one another, and yet for many of us, it was the first time that we were seeing each other. So it was kinda exciting yet awkward at the same time. We were like strangers, and yet we weren't. [at this point - hubbs, who has been watching me type this entry, comments that I am very longwinded *grrrrrrr*... it's called being descriptive, silly!!!]

Anywayz, it was a weird feeling. I'd almost wish we were all back in front of the computer, all on the forum page. I felt like I wanted to be part of every conversation, to listen in on what everyone is saying, and talking about. Just like in the forum. Then it struck me how voyeuristic it is, to be part of a forum group.

I was thinking, then, what would be a good venue for a gathering for forummers like us. Then this image popped into mind: a large meeting room with a large round table and all of us at a seat, with our computers, typing on the forum, but looking up to see each other's faces whenever someone posts something, to share smiles, laughs, groans, knowing looks, "me also!!!"s and "ah yoh"s etc etc...

hahaha that was just a thought... then of course, we can all take a break by going to the buffet table and coagulating into the various groups that had organised our mini-bulk-purchases be it for milkbags or guccibags or eyebags (haha the last we all have already!)

Well, all in all, it was pretty fun. We all finally got to see each other in the flesh, and our little bubs too. :) can't wait for our next gathering :p

Here's Isaac looking cheeky in the stroller. He was alright for the first half hour, then he got kinda cranky and wanted to sleep. Napped in hubbs arms for a good part of the gathering, then woke up just as everyone was leaving. tsk tsk tsk... 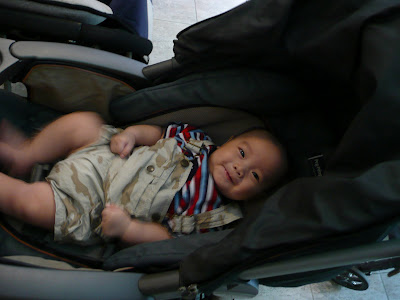 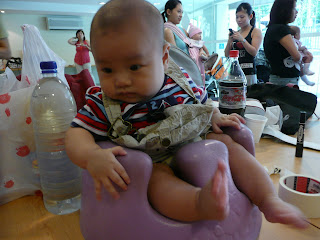 Isaac in the bumbo. Think one of his legs is fatter than the other, coz one side could get in fine, but the other had difficulty going in! :O He seemed to like the seat fine though. Here he is staring at the satay that his Papa is offering him... He doesn't seem to realise that it's food... guess it looks kinda different from Mummy's n*pple ;p (yes yes dun be grossssssss...) 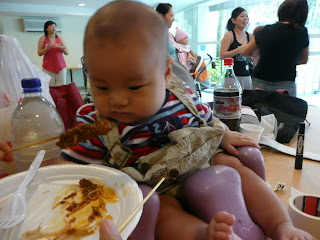 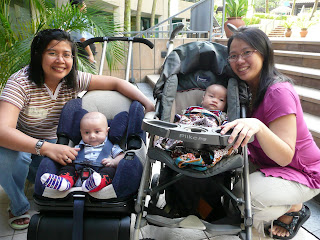