It's been such a long time since I did a blog entry that even though I am on mc this afternoon, I decided I shall do an entry till I feel groggy and drowsy from the cough medicine I just took.

It's been an eventful week or so - and I'm not just talking about Christmas!

Did I tell you guys that I'm about to have a change in career path? Well, sort of. I'm going to join the asset management department from January 2008 onwards. It's kinda exciting coz I'm going to do asset management stuff, which is kinda different from lease management / marketing stuff which I have been doing since graduation. The flip side is that I really like the colleagues and the environment in my current lease management department, so I'm really gonna miss them. But then, still in the same company, so at least I can like pop by as often as I like (or as and when I am free, rather!)

Anywayz (see, side-track again), had an all day meeting with the new department on Monday 17th Dec, and on 18th and 19th, went with the new department colleagues on a retreat! A 2 day 1 night trip to KL by coach. "So good! overseas trip!" I hear some of you saying. But I dreaded going on the trip! I was sooooo gonna miss my Isaac, I thought!

Turns out that my boobs was on my mind more than Isaac lor.

I forgot that the coach trip to KL was a good 5 to 6 hours plus!!! And my mammary glands (defined here as:"any of the large compound modified sebaceous glands that in female mammals are modified to secrete milk, are situated ventrally in pairs, and usually terminate in a nipple." ain't that hilarious!?) needed emptying every 4 hours plus or so! I thought I might be able to last the trip up as I have dragged pumping times before for 5 hours plus, but no... coz of the rest-stops and clearing of customs etc, my mammaries started to cry out in pain as early as the Yong Peng rest stop. By lunch time, I was like bursting already but really didn't want to pump there (how to ask for a private room with powerpoint at a malaysian shophouse restaurant?! can't imagine myself trying to explain why I wanted the room for in chinese - "Auntie, wo3 yao4 ji3 nai3, you3 mei2 you3 fang2 jian1?" ?!?!?!?

So, no choice, tahan all the way to KL. Practically grabbed my key from my colleague's hands, rushed upstairs into my room, and immediately started to set up the equipment to start pumping. It was truly sweeeet music to my early a few moments later - I never found the sound of the machine pumping so pleasant and soothing before.... ahhhh..... I happily pumped away for quite a while... (coz got a lot of milk mah) Suddenly, I had a horrific thought - "What if my pump died on me?! I'd be pumpless in a foreign country!? OH NO!?!?!? Immediately, I switched off the pump for awhile to let it rest. Then I swore to myself that I must always bring my trusty manual pump with me every time I leave the country! Which on hindsight, I should have brought with me, coz if worst come to worst, I could always drape a cloth on myself and pump on the coach! Desperate times calls for desperate measures, you know!!!

So for the entire retreat, I was very conscious of my boobs... Of course, I missed hubbs and Isaac terribly. So with Isaac, hubbs and boobs on my mind, I hardly enjoyed the trip at all. Couldn't wait to go home. Was wondering why I even brought my camera along - coz I wasn't interested in taking any pictures at all. Only till at night, after I spoke with hubbs on the phone and was about to go to bed, did I realise why I brought my camera... to see Isaac's pictures and videos!!! Was soooo glad that I had my camera with me then!

With all the pumping, I also tried my best to bring as many blue ice-blocks as I could, so that I could bring back as much milk as I can. Even had to get the hotel staff to place my blue ice-blocks in their kitchen freezer to freeze it, as the room's minifridge did not even have a mini freezer compartment at all.

I'm happy to announce that I didn't have to throw away a single drop of milk. Managed to bring enough storage to store all the milk I pumped during that 2 day 1 night trip. Here's the only picture I took in my entire trip! My milk!!! 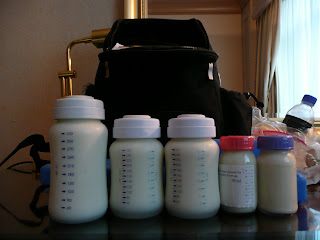