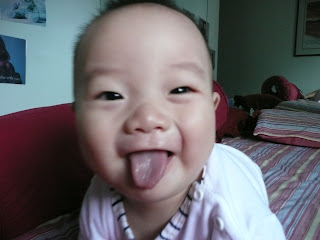 This is my cheeky Isaac. The day before these pictures were taken, Isaac saw a dog that kept wagging his tongue at him. So he was into the tongue sticking out routine this morning. Really looked like a dog, I must say. 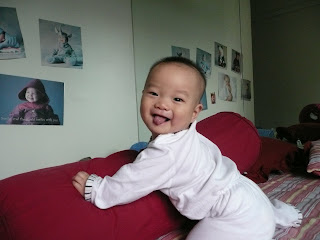 I spent the whole morning swearing that I will not let Isaac look at dogs for too long a period at a time ;p Hmmm... then again, maybe he learnt this sticking out tongue thingy from somebody... dunno which 'auntie' or 'uncle', 'cheh cheh' or 'kor kor' out there... *squintily*eyeing*all*you*readers* Quick! Own up!!! :p 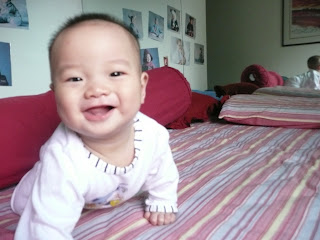 Oh yes, and guess what? My Isaac bites!!! urrghhh!!! he bites me n*pples when he drinks!!! urghhhh!!! or rather, he bites when he's had enough milk and he just bites for the fun of it. 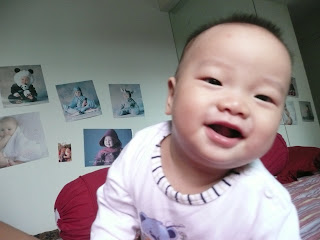 Then again, sometimes when he still wanna drink, but is in a playful mood, he also bites. hummphh!!! ANGRY MUMMY!!! 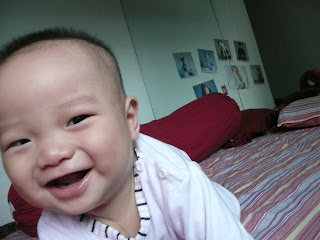 So, now, when feeding Isaac, hubbs would often hear me go:" Stop it, Isaac. I said, STOP IT. Don't be naughty! If you don't wanna drink - just stop! You don't have to bite Mummy. I SAID STOP IT. NOW! ISAAAAAC!!!!" 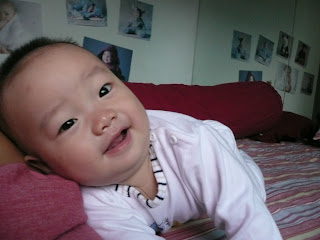 Then I pry him away from me, and he looks up and grins at me. GRINS at me, he does. BASKET. "Isaac!!! This is no laughing matter you know?! Mummy pain pain! PAIN PAIN!!!" 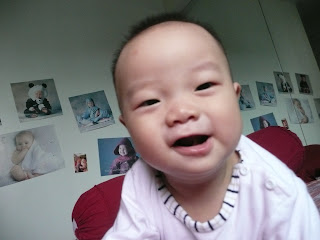 Like he gives a damn that Mummy pain pain. *roll*eyes* He happily clamps down on me again, chewing on me like I'd a piece of Wrigley's chewing gum. "Isaac!!! If you're gonna bite Mummy, Mummy won't feed you already. Don't let you drink! HUMMPHH!" 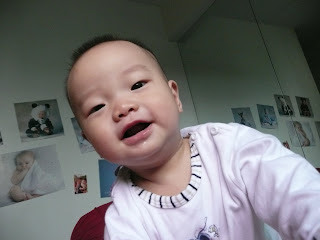 Then I pull him away from my breast. And proceed to wear my bra and pull down my tee. So that he has NO ACCESS. kekeke. Then he starts wailing... kekeke... I'd let him wail for awhile. Scolding him while he was crying. "Who call you to bite Mummy?! Tell me! Who ask you to bite Mummy?! " After more crying while gleeful Mummy laughs at him "So how?! Wanna drink milk or not??? Wanna drink issit?! Wanna drink then you DON"T BITE MUMMY, you silly boy!" 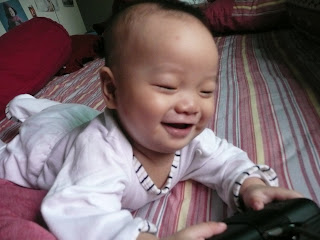 kekeke... then after he cries enough, and looks apologetic and hungry enough... I let him drink again. Sighz. That Mummy-Moo-Moo-Cow for you. Can't resist this little boy of mine. Look at him. My Dad says Isaac's killer smile is gonna land him with loads of girlfriends next time. *shudder* I think I shall want to interview them. hmmm... ;p 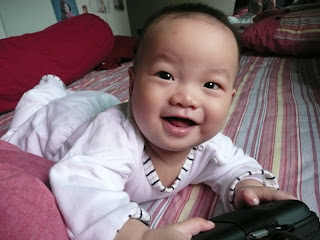