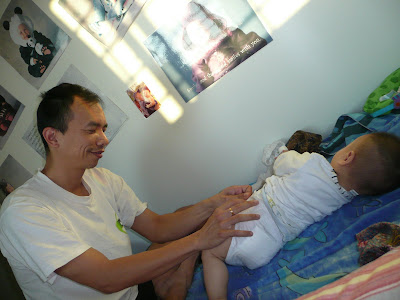 Here's the good papa changing Isaac's diaper, wearing back his long pants for him. 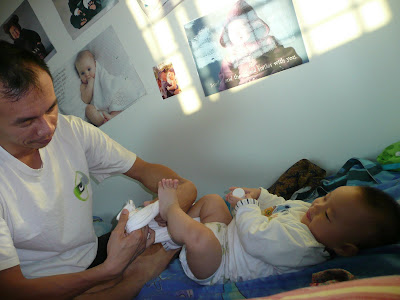 I can't recall if I've mentioned it before - that hubbs' is quite good with taking care of Isaac. He's very involved and does almost everything he cans. He changes diapers, he bathes Isaac, he bottle feeds Isaac - in fact, the only thing he can't do, is to breast feed him! kekeke... 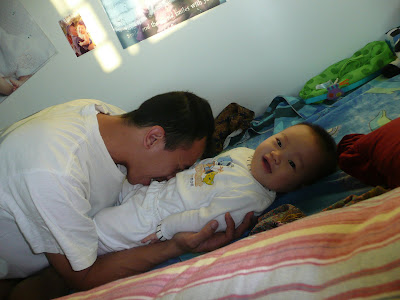 I have attempted to get Isaac to suckle hubbs - but he wasn't interested. Think dun have the smell (of milk) to antice him, plus hubbs nipple is like totally FLAT - so a bit hard for Isaac to latch on lah. So, lucky hubbs, doesn't have to endure the sore and bleeding nipples stage that I went through when I first started breastfeeding. 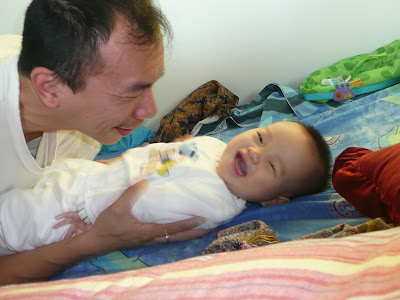 Oh and lucky hubbs doesn't need to wake up in the middle of the night to be a milk bar to Isaac. hummphh. I don't think I have slept straight, uninterrupted, for more than 3 hours since I have given birth to Isaac. Sighz. Just last night, our dear Isaac woke up at every hour!!! *groan* If he goes on like that, I sure peng san, I tell you. 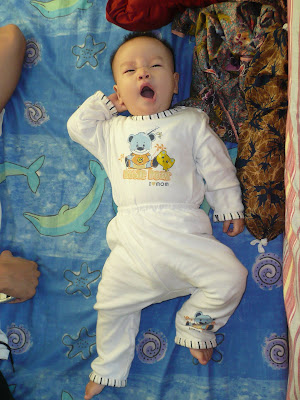 above pictures taken on 5th April 2008
Isaac @ one day to 8 months
Ah well, as Confucius says: the price of motherhood, never comes cheap. (not sure when he said that ;p think he was confused. hahahhahaa... sorry brain's mushed already. all coz of the little boy that wouldn't sleeeeep!!!! urrghhh!!! ;p)
Posted by Pamela at 08:34