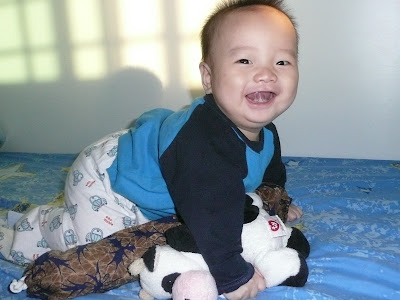 This is our dear Isaac boy. Cheerful and bright as day the moment he wakes up. Doesn't matter what time in the morning he wakes up (can be as early as 6am!?!?). So what does he do when he wakes up? Let's see... 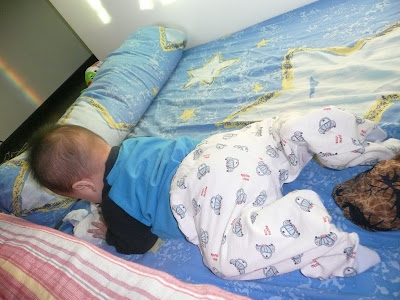 He'd scour his bed and play with whatever he finds on it - here he is playing with a long sleeved pyjama shirt of his that I'd left on his bed as backup during the night. 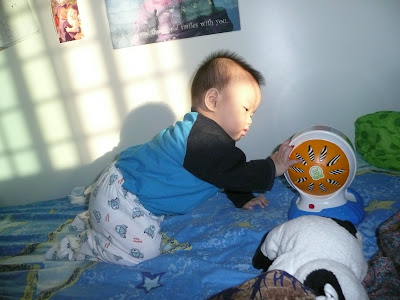 He'd play with his favourite toy - the LeapFrog Alphabet Zoo that his Godma gave him. He spins the drum of the toy, and there're sounds of the alphabet being read, and the sound the animal makes. When hubbs and I start to hear "Spin, spin a letter..." or "The animal has something to say... Z - Zebra, Zebra..." we know someone's awake... 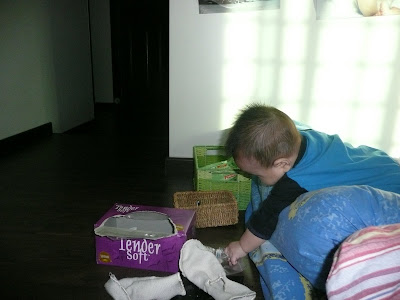 When he gets bored with the alphabet zoo and everything he can find on his bed, Isaac VENTURE BEYOND... When he was younger, he couldn't climb over the bolster... but now, he can climb on it, and over it! Here he is trying to reach for whatever he sees... 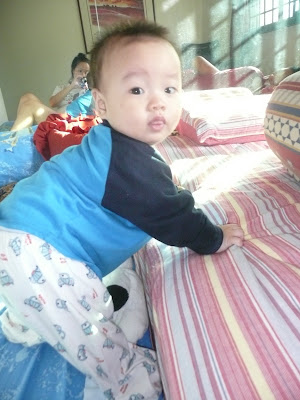 And when he's bored with whatever he finds just outside his bed... he looks for... Mummy & Papa!!! Now Isaac can pull himself to a standing position like that. He'd stand like that to call me or hubbs. 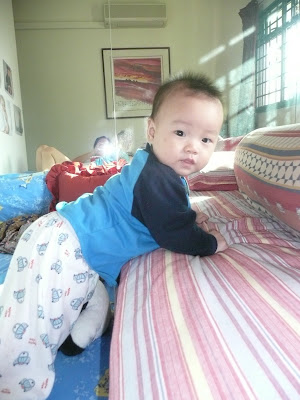 Even when he wakes up at night, and sometimes I don't hear him, he would stand like that at the bed and wake me up. 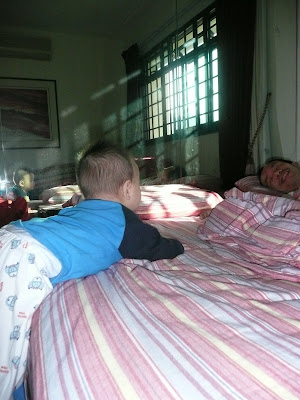 Ah! Isaac has spotted his Papa sleeping at the far end! At this point in time, Isaac hasn't yet been able to climb onto our bed on his own. Thus after some struggling and whining from Isaac, hubbs reaches over to lend a hand. 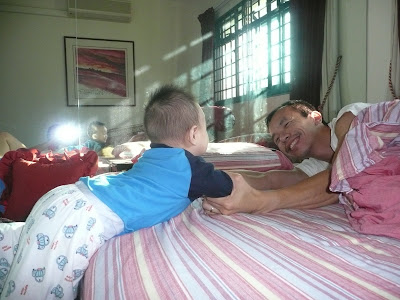 Last weekend, Isaac managed to climb up onto the bed all by himself! Well, the first time he did that, he actually used me as a ladder of sorts and simply scrambled up mummy and onto the bed (causing much pain and distress to various parts of my body - he moved so fast that I barely had time to stop him - he was on the bed already!). And the second time it happened, we were like:"Huh? did he just climb onto the bed himself?" "Er... yeah, think so huh..." 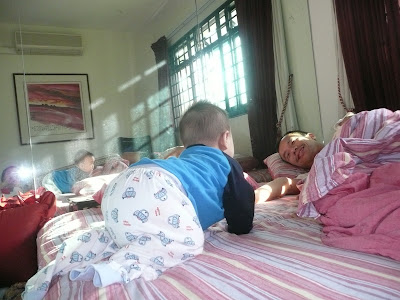 pictures above taken on 14th March 2008
Isaac @ 7 months plus
Isaac's really growing so fast... Oh and he's grown two teeth already! Spotted them on his lower gums 2 weekends ago. Well, technically, I didn't SEE them first - I felt them - when he bit me!!! *ouch* Sighz. Well, I count myself lucky that he doesn't bite me as much as he used to. I guess all the scolding paid off. He used to constantly bite me when he doesn't want to drink anymore. So, I'd scold him:"Isaac! If you don't wanna drink, then you don't drink! Cannot bite Mummy! Stop!!! Stop!!! Stop biting Mummmmy!!! You continue doing this then Mummy don't feed you huh!?!?" See lah... so desperate , I had to resort to threats! Haha!
Posted by Pamela at 08:21