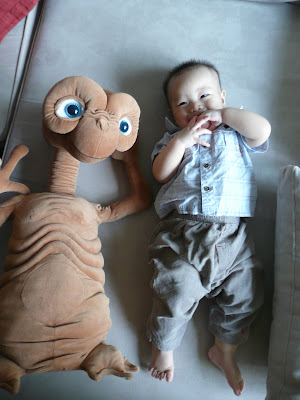 ET pix again! Late again! hehehe... these pix were taken a month ago, when Isaac was about 8 mths old. Speaking of which, in the excitement of me breaking my arm and all - we forgot to take Isaac with E.T on the 6th again! Will probably take him with E.T. this Saturday. 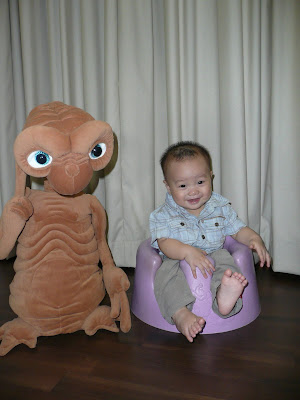 Isaac seems to be growing taller, but he doesn't really seem to be putting on much width wise. My mother-in-law often laments in teochew, that Isaac's face "has disappeared" - as in, his face is much sharper and more defined now, than when it was all padded up with his baby fat.

My father, on the other hand, happily informs me constantly that "Isaac looks very slim and trim now." hahaha... which I am inclined to agree with more.

I feel, that this just reflects how different our two families are. Hubbs' family are all very skinny. Blessed with skinny genes, they eat gigantic portions at meal times, all kinds of fatty meat, skin and innards, fried stuff , loads of carbo, etc etc - but yet remain skinny people. My family, generally have FAT genes. We eat like birds - very little or no carbo, steamed, soup or boiled stuff, skinless, fatless, small portions, exercise - and we juuuust manage to stay within the healthy weight zone, bordering on being overweight. Generally, coz it doesn't include my sister - who is blessed with ultra skinny genes. But then, even my sister watches her diet closely and exercises too. So, there.

When hubbs wasn't hubbs and was just The Boyfriend came over to my place for dinner the first time - he almost dieded. He could like finished up all the food! The amount of rice and food that he eats is the same as what my dad+mum+bro-in-law+sister+me eats!!! hahaha it's how much he eats but also how little my family eats... After awhile my mum realised that The Boyfriend was devouring every scrap of food available to him, and started to cook more when he comes for dinner. hubbs get a whole extra cup of rice cooked when he comes for dinner. hahahaha...

Frankly speaking, I'm hoping Isaac will tend towards his Papa's skinny genes, than my FAT genes. You can imagined how pissed I was when, at two/three months with Isaac increasing his weight at an exponential rate, hubbs told me:"Don't worry, he won't be fat next time one lah - he has my genes." To which I exploded:" YOU MEAN TO SAY HE HAS NONE OF MY GENES?!?!" Angry Mama personified!!! 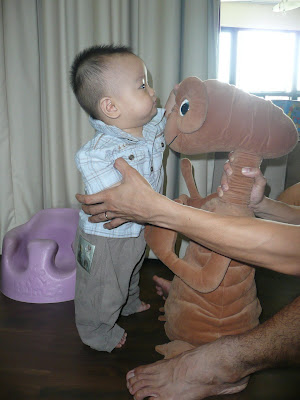