Sorries for MIA-ing for such a long time! Been super busy at work! (though someone insists that its not so busy now... :p) So shall compensate with writing a bit more now! :) something which I haven't had the luxury of doing in a long while! 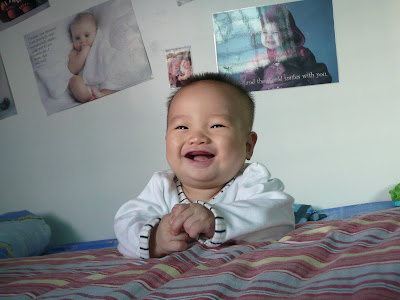 It's been quite a long while since I've talked about milk. Well, I'm proud to say that Isaac is currently still 100% breastfed by his mummy dearest. So, that's like approaching 9 months this coming 6th May. Well of course, Isaac now eats porridge and cereal etc. So he isn't just drinking milk alone. But still, he's on 100% breast milk - have not supplemented him with formula as yet. 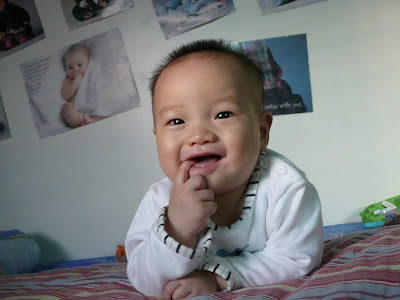 Well that was the good news. Unfortunately, this silly bugger, has recently (after the Good Friday Easter Sunday weekend), refused to take milk through the bottle! As in, in the day time when I am at work, Isaac refuses to drink breast milk that my mother-in-law tries to feed him through the bottle. Sighz. He only wants to latch on ... to me... when I am with him. Well, I must admit that it feels good to be 'wanted'. But yet, we're worried that he isn't getting enough milk. He is, afterall, still a baby. He needs milk! 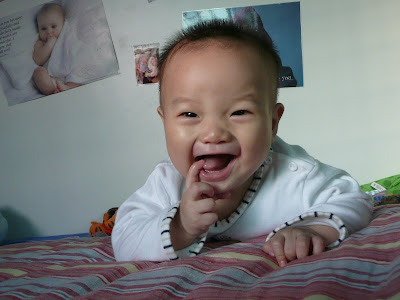 So he's been eating porridge in the day. He used to take porridge twice in the day, and nce of cereal (Frisocreme - which has milk powder in it). But recently, he's taken to refusing the cereal as well, and so he takes porridge three times a day.

Worried me has been popping my multi-vites and calcium pills more diligently these days to ensure that I am providing him with quality milk ;p And coz his demand for milk has dropped, so has my supply, and thus I don't even need to pump in office now - I just make Isaac drink right before I go to work - and that can last me till I come home from work and let him drink.

In fact, come to think of it, Isaac hardly drank the frozen milk that I'd painstakingly stockpiled for him. I think in this past 9 months - he probably drank like 10% of the milk that I have frozen. The rest have all been given away. At last count, my milk has been drunk by at least 7 other babies, other than Isaac. Well, at least it wasn't totally wasted.

Well, I hope to breastfeed Isaac to 1 year old. But having interrupted sleep for 9 months is taking its toll on me. Isaac still wakes up at least twice a night to drink - and now that he is refusing the bottle in the day, I don't have the heart to wean him off night feeds either. So we're thinking of starting him on formula... we'd have to start sometime... plus, I'm not sure I want to breastfeed through pregnancy either - if and when we eventually want to get pregnant.