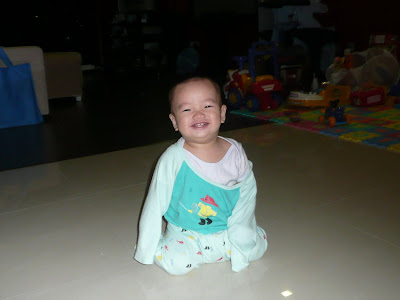 above picture taken on 6th August 2008 - 6.41am
Isaac @ 24 minutes to 1 year old!!!
It's 6th August 2008! Isaac turns one today!!! HAPPY BIRTHDAY ISAAC!!! :) He Who Laughs is a boy of a million smiles! Look at the pic above! He's grinning from ear to ear at 6.41am in the morning, now tell me - how many of you can do that?!?! hahaha... Isaac would smile almost immediately when he wakes up, sheepishly and sleepily, but smile he will. I think he must have smiled more than a million times since he was born a year ago!

As of today, Isaac can do many things, he can:
Okay, I can't think of anything more. Other than to drink milk from me in all sorts of positions :p ok ok, too much info, too much info :p hahahaha...

picture above taken on 26th July 2008
Isaac @ two weeks to 1 year; Natalie @ 9 months; Isabelle @ turned 3 years in May 2008 ; Rebecca @ going to 5 years in November 2008
The above is the first celebration we had on 26th July 2008. It was held at my parents' place, for my relatives - from both my mother and my father side. I come from a big family - both my parents have 9 siblings each. So, I have more than 20 cousins from each side. Both my parents are ranked #5 respectively, amongst their siblings. Thus, I have cousins who are married and have kids too! Hence, you can imagine the crowd. We rsvped 40 adults - not counting including those below 12! It was also a farewell party for my sister they all since they were leaving on 3rd August. We viewed pix from my cousin Yew Jin's trip to Perth, where he stayed with Joel & Andrea and the boys, too. We all had a great time catching up :) 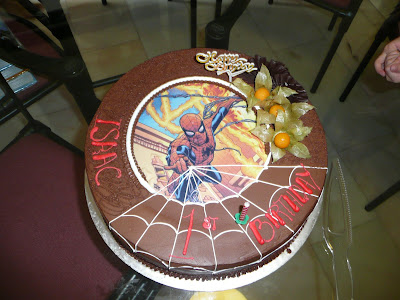 Above is Isaac's first Spidey cake! (the 26th July one) Looks nice, and tastes great!!! So we ordered again from the same shop for the 2nd August party! See below! :) Looks and tastes great too! 2kg each. The first cake above - everyone finished every single scrap of it! (How often does that ever happen!??!) The cake below, coz there were less people at the party, had a 8cm by 8cm chunk remaining - which was fine with me! kekeke *yummy* !!! Oh, how much were they? Just under $70 each :) a bargain! 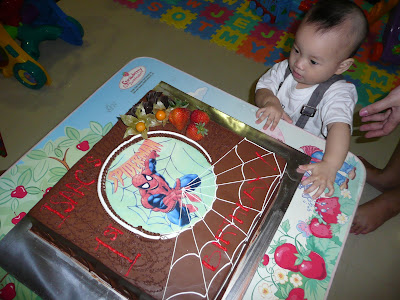 Here's Isaac admiring his 2nd Spidey cake - he's lucky!!! He's barely one and he's had TWO Spidey cakes!!! I've never had a Spidey birthday cake all my life (so far!) !!! 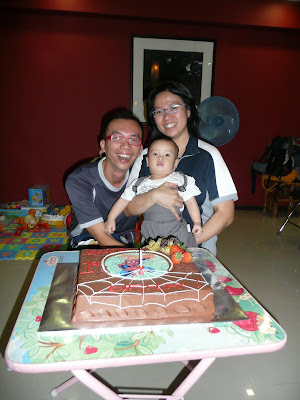 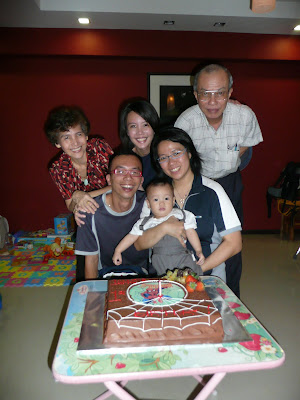 I managed to rush out an entire DVD of one year's worth of Isaac's photos from birth, so that was running on the screen the whole night - guaranteed smiles from the birthday boy! kekeke... (Anyone wants a copy, just let me know! :p) Hubbs' cousins & nephews/nieces have also been hooked onto our exciting range of boardgames, so they were playing the games all night, and had lotsa fun :) Yay! We're on our way to introducing more people to boardgames and converting them to being gamers! :) 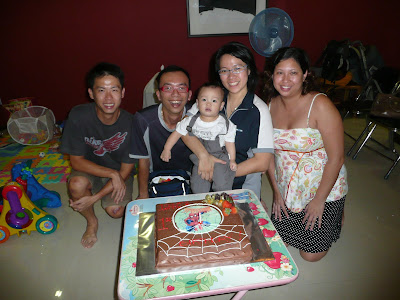 four pictures above taken on 2nd August 2008
Isaac @ four days to 1 year old
And there's Isaac's Godpa and Godma above, with little Godsis Regina in Godma's tum tum! We can't wait for Regina to come out and play with Isaac - though we've been telling Godma & Godpa to cherish their 2 people world... hahahahaha... no worris, we'd conduct assimilation courses if need be - anyone wants to sign up!? kekeke... 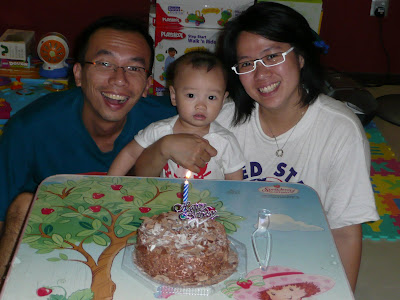 Our 3rd celebration of Isaac's birthday - on the actual day!!! :) I took half day off from work to spend with Isaac. Then, in the evening, my good friend Ailing, dropped by with a delicious black forest cake to celebrate with Isaac and us! Isaac! Say "Thank you, Ee-ee Ailing!!!" :) 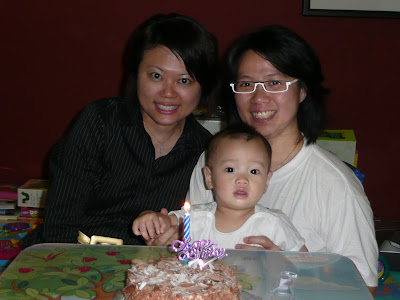 Isaac, supremely pleased with his third cake in 3 weeks! :) 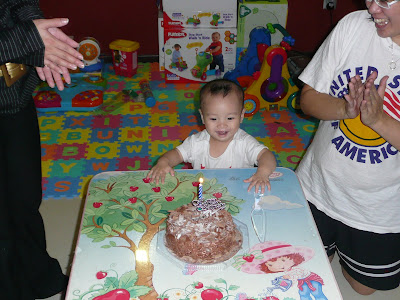 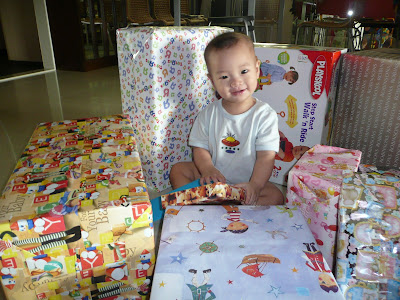 above picture taken on 3rd August 2008
Isaac @ three days to 1 year old
Here's our sweet Isaac, sitting amid his bounty of presents from his 2nd party the night before (sorry, already opened presents from 26th July hahaha...)