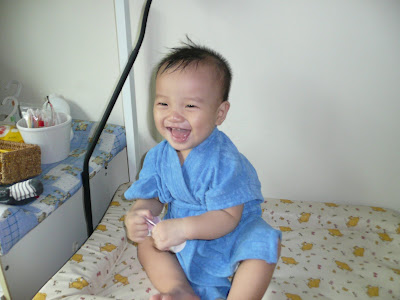 We found this bathrobe amongst the clothes we have for Isaac that we've got passed down to us from various sources (thank you everyone!!! :) So we put it on for him after bath one day, and took some pix :p 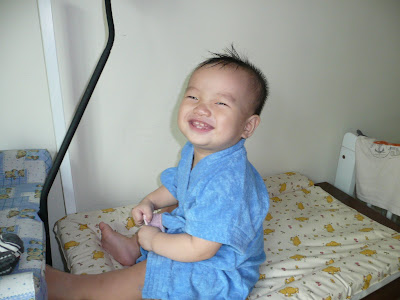 We don't really use it coz we usually towel him down after his bath and quickly dress him - coz we're always afraid he will catch a chill, right ;p But think we should put it in the swimming bag, he can wear it when he comes out from the pool :) 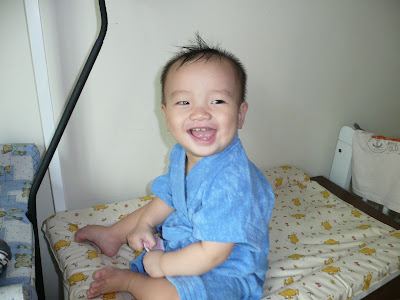 Happy boy as always. Though not always happy immediately after his bathtime coz he wants to stay in the tub longer!!! Isaac loves the water and would always want to have a longer bath than we would usually allow him. Though, think I am the impatient one where, once we're done, play a little while, I would wanna take him out. But hubbs tends to understand this 'playing' thing more. He'd let Isaac play 'sufficiently' before taking him out. But I dunno how he gauges 'sufficiently' coz hubbs doesn't let Isaac bathe too long either. But he lets him bathe long enough such that Isaac is always okay about coming out of the bath. 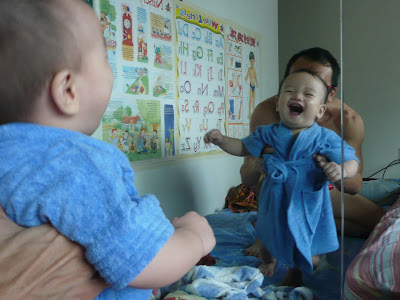 I asked hubbs:"Hey! How come when you take him out, he doesn't cry. But when I do, he does?" Hubbs:"Coz I let him play long enough mah..." hahahaa... I think that's one point. But another point I noticed, is that hubbs would always tell Isaac that it's time to come up, and then count to 10 with him, using Isaac's hands to splash/'beat' the water with each count. End the count with major splashing finale, then take him out. And Isaac has no complaints!? So the next time I try that too - and it works!!! :) hahahaha... hubbs so clever... kekeke... 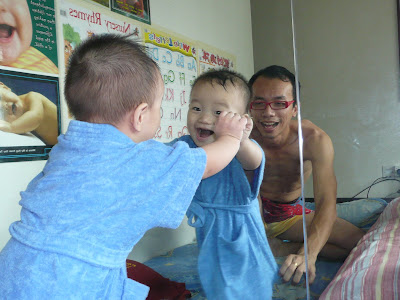 Isaac loves to see himself in the mirror. Sometimes, he'd just stand in front of the mirror, with his hands on his tummy, then he'd rotate his torso from from side to side, looking at the mirror! hahaha... it's quite hilarious. Will try to catch a vid of that if I can. 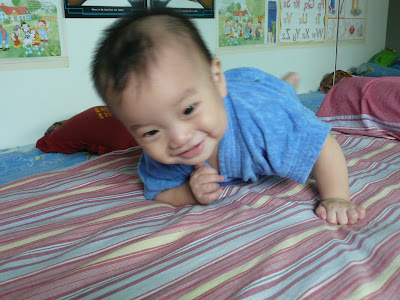 Isaac climbs onto our bed with ease now. At night, sometimes he would wake up and climb onto our bed, to look for me. So sometimes we let him sleep between us for awhile. But we don't want him to make a habit of it, so I usually place him back on his bed after awhile. Isaac's also more used to his bed as he would have more space to flip around (when he sleeps - yes!). Hubbs too, he would always complain he has no space to turn when Isaac is on the bed. ;p 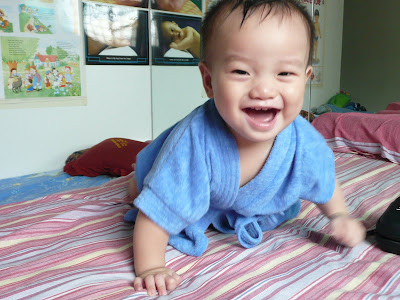 pictures above taken on 27th July 2008
Isaac @ ten days to 1 year!!!
Oh did I mention that Isaac can walk already? At 13 months, he can walk. Sighz. which is a constant reminder to me that I am way behind on blog posts with the pix. Been trying to catch up... Friends suggest that I should just abandon the lag period and just go to present day. But how can I do that?!?! This is supposed to be the CHRONICLES of Isaac! Cannot skip lah... :p Okay, I will try me utmost best!!! Aim to be current by end of this year!!! :p
Posted by Pamela at 08:10