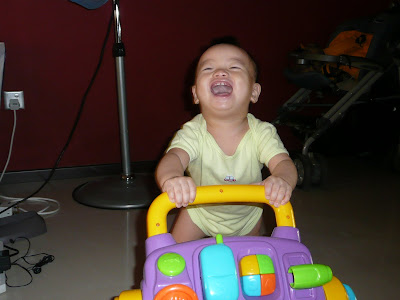 This was Isaac before his haircut. All smiley as always, having a fun time using his walker. Then he had his haircut... 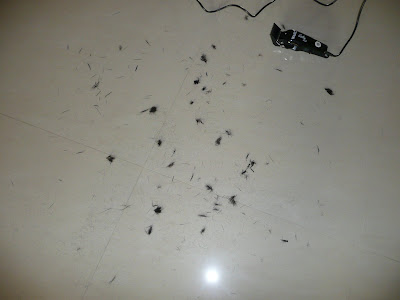 Look at him - cry until like that. Sighz. His very first haircut, he didn't really cry. But thereafter, he'd cry during each haircut. Though, we do notice, that as time goes by, his cries are not a terror-filled as it was before. 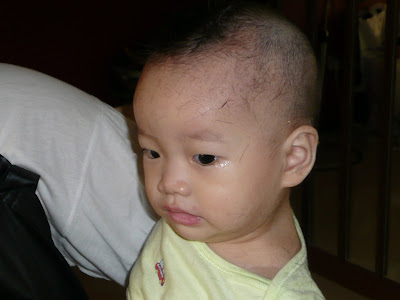 The thing with my darling boy, is that even though I am the one wielding the shears, sorry, the shaver, or actually, the proper name is the hair clipper - Isaac would still run to be to be comforted. Thus, I actually end up holding him in one arm, whilst continuing to shave his head. 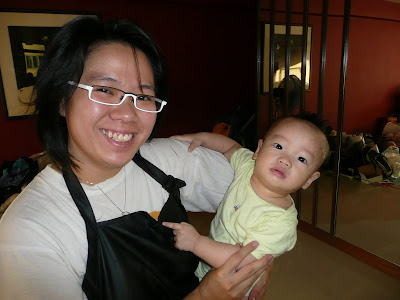 Sometimes, hubbs would hold on to him while I shave him. This is especially when we need to shave some pattern - like leaving a patch in front - like a china boy.

Yes, in case you're wondering, it's cut like that upon special request from hubbs. Dunno if I've mentioned it before, but hubbs and his family (and I mean entire extended family) all lurrrves the china boy cut. Whilst my parents and relatives are like:"Why cut like until like that?!" though later, most of them do concede "Actually quite cute lah..."

hahahaha... yeah, I must admit that I was quite reluctant to give him the china boy look in the beginning, but then after it was cut, I too admit that he looks rather cute with the lil tuft in front.

hubbs students all say that Isaac has more hair in his tuft of hair than hubbs had in HIS tuft - what's left of it, that is!!! ;p
Posted by Pamela at 23:59