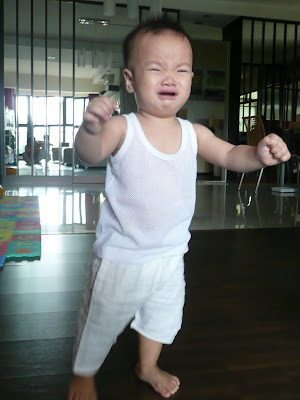 Yes, Isaac throws tantrums too, when he doesn't get what he wants. But thankfully, usually they're not prolonged affairs, and he usually listens (somewhat) when I reason with him. Then again, hubbs would tell you that perhaps I just just like bored Isaac with my incessant talking that Isaac just gave up ;p 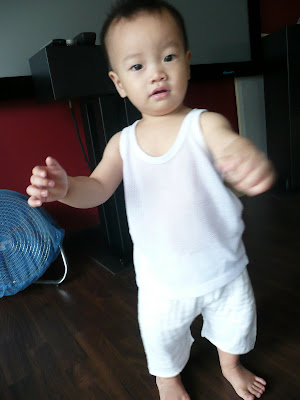 You can't see the "holes" in the singlet - but this is actually the quintessential ah pek singlet!!! And look at the pants! Can you see what that is? It's actually pants made from cloth nappies! My MIL made them. Cool huh!? I love them! hahaha...

When my MIL made them for Isaac sometime back, they actually reached right to his ankles. But look how much he's grown! They're now three-quarts going on berms already! :) 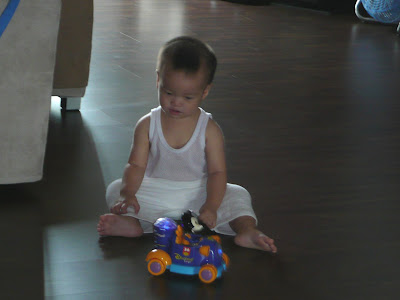 pictures above taken on 6th September 2008
Isaac @ 13 months exactly!
Isaac's here's playing with his Mickey toy thingy. Our Malay neighbour bought it for him for his birthday present. He loves it!!! It's the kinda toy that, with batteries in it, would run around on its own, spin round and round at intervals, while playing loud disco music with bright flashing lights. Isaac enjoys seeing it go around. But most of all, he loves to pick it up, turn it upside down, to see how the thing works! hahahha... His Papa says Isaac's just like his Mama, very curious about how things work! kekeke... *beams*
Posted by Pamela at 21:39