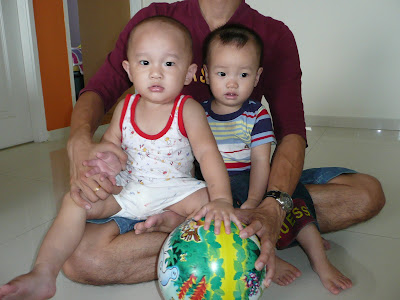 Remember Zenon? He's a June 2007 baby - two months older than Isaac. He's also bigger and stronger than Isaac. plus he "starts first" for almost everything from sitting up, to crawling, to walking to running - just a bit faster.

But that's enough, coz poor Isaac's always being pushed around - literally, by Zenon! Coz when Zenon could start crawling about, Isaac was just starting to. When Isaac could crawl around and sit up on his own, Zenon could stand already. When Isaac started to walk albeit unsteadily, Zenon could zip about without aid, and he would accidentally bump into Isaac, or unintentionally push him over. (Well, sometimes intentionally. hahaha) And now that Isaac can walk pretty steadily, Zenon can almost run! hahhaa...

Ah well, they'd even out in time. Afterall, the effects of differences in age is most apparent at a young age - when Isaac is 10 months old and Zenon is 12 months - Zenon's effectively 20% older than Isaac!!! hahaha..

Here's Zenon trying to take back his ball from Isaac... 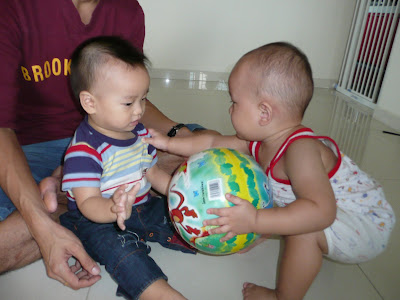 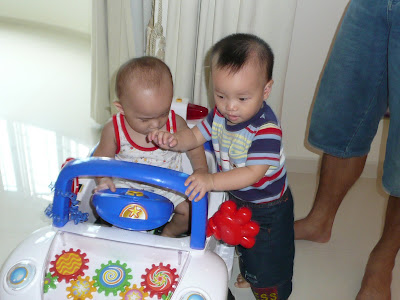 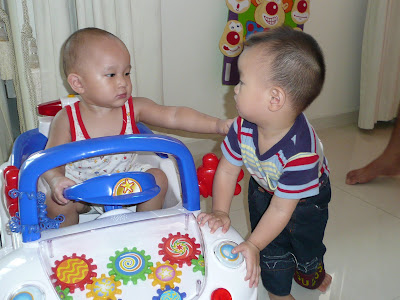 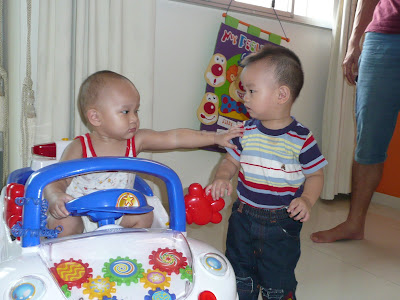 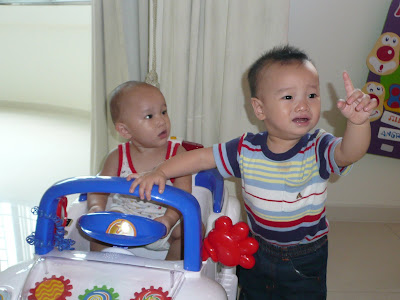 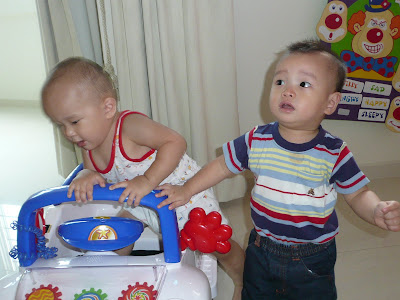 hahahhaa... yes yes Isaac eventually got to sit in the car and play in it for quite awhile. The boys are learning to play together, slowly. Being similar in age, they haven't yet learnt to play together yet. 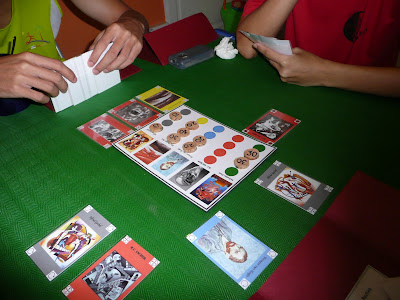 pictures above taken on 31st August 2008
Isaac @ eight days to 13 months
Zenon @ 15 months plus
And what were we doing while Isaac and Zenon was playing? We were playing games as well! Zenon's parents are our gaming kaki kekeke... We don't play mahjong, we play boardgames! No, not Monopoly, Risk nor Cluedo. We play more interesting games like Puerto Rico, Power Grid, Acquire, Alhambra, Samurai, Giza, Carcassonne, Ticket to Ride... etc...

The one in the picture above is Modern Art - and guess what? The Modern Art above is a copy I made myself! :) Was Py & Jeff who introduced this game to us, and we liked it very much. But I decided to make my own copy of it as I thought I could do a much better job of it than the originals! And everyone agrees that my copy is nicer! :) kekeke...

The Settlers of Catan was the one that started me on gaming. Thanks to my dear friend Jacomijn who introduced it to me when I was in Aberdeen for student exchange when I was in uni. Since then, I've been initiated into this wonderful world of boardgames, gotten hubbs into it, and we've been trying to get our friends and family into it too.

So if any of you are gamers like us, or want to learn how to play boardgames! Do drop us a line, and we can organise a games day or a games session! :)
Posted by Pamela at 08:23