A toy car!!! hahahaha... We often go to IMM for breakfast on weekends, and we'd just walk around or do a spot of grocery shopping after breakfast. Here we were in Giant, where we'd inevitably wander over to the bicycles' section... 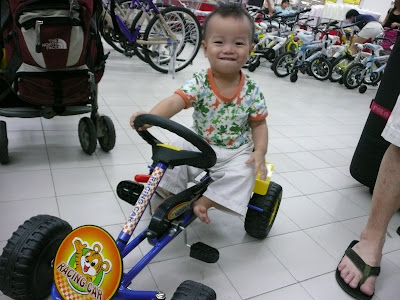 I'd always liked bikes from when I was young... my first bike was a nice blue BMX bike which my cousin Joel passed to me. It was a second hand bike, sure, but it was great! I loved it! Went everywhere on that bike - cycled to Jurong East Central on it to get my Burger King mushroom swiss fix, and sometimes to get a Mr Softee from 7/11.

I'd always liked cars too. I collected tons of Matchbox cars and little Micro Machines cars. I still have them at my parents place! I intend to bring them home one day, my treasured possessions! kekeke...

Thus, I have been hoping that Isaac would have this car passion of mine. Well, he seems to like sitting behind the wheel of a real car. But he didn't seem to know how to play with matchbox cars. Nevermind, I'd train him on that. Been buying him a few Ferraris already ;p