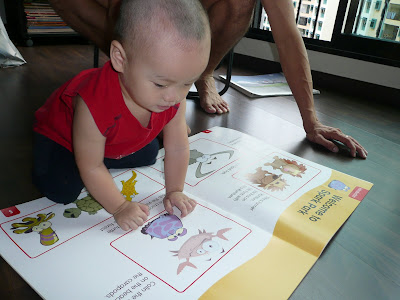 This is a series of nice pix showing Isaac reading :) we're really glad that he likes books and all. 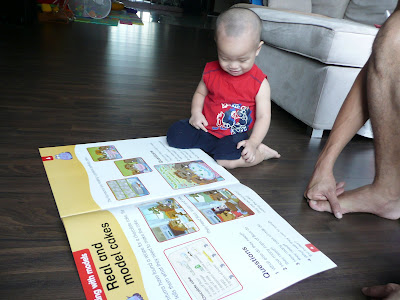 Though we're feeling a bit guilty that we haven't been reading to him much lately, been busy and all... *mental*note* must read more to Isaac... 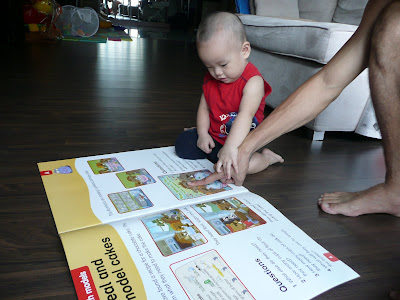 Isaac likes to take our finger to point at stuff. Sometimes it's to remind us to point out stuff and tell him about them - coz sometimes we forget to do so, we just yak away without pointing out stuff to him.

He even does this in the car - he'd take my finger and point it on the window - telling me to tell him about the stuff we see going by outside. 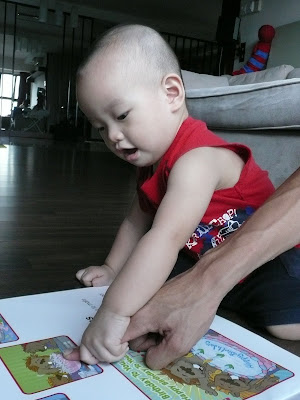 However, sometimes, it's like when we tell him not to touch something coz it is dirty/hot/cold/whatever undesirable - then he would take OUR FINGER/HAND to touch that thing!?!? hahahaha... then I'd say "No, Mummy also cannot touch!" then he'd grin at me. sighz. hahahhaa... 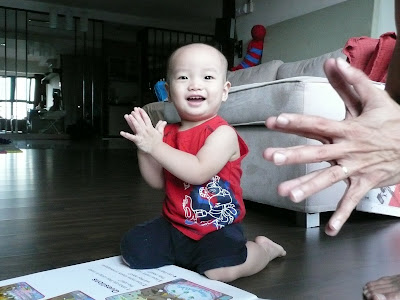 pix taken on 20th September 2008
Isaac @ 13 months plus
We often encourage Isaac by saying what he did was good, and clap our hands. He understands that clapping hands means "good".

Since he was much younger, hubbs used to ask him when we feed him something:"Is it nice to eat? If so, clap your hands!" and so he would! :) He doesn't always clap his hands when we ask this - which led me to wonder - is it him being stubborn or just simply not in the mood to clap? Or is it that the food is only 'alright' and not really 'nice' - that's why he doesn't clap?

I discussed this with hubbs and we suspect it's the latter. Which we find kinda 'scary'/amusing... coz like, we're constantly being amazed and amused that a little kid so young can 'understand' a lot of things... hahaha... so it just goes to show, we shouldn't underestimate kids nowadays... and that we should always watch our own behaviour in front of the kids!!! (This, I always tell hubbs when he starts digging his nose in full view of Isaac... sighz...) ;p