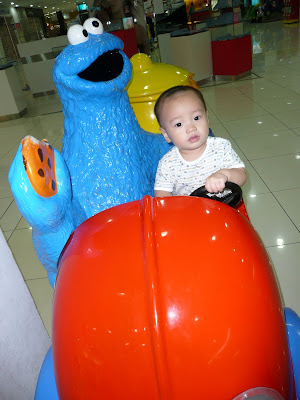 On some weekends, we would go to IMM for breakfast. Great play to be there early so we can park on the 3rd floor and beat the crowd. Isaac usually wakes up early, like 7ish, or 8plus at the latest, so that usually means we're in IMM before 9am. 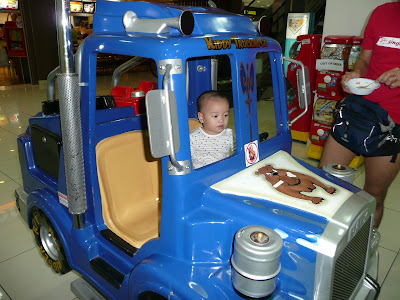 One thing great about IMM is number of kiddy rides they have! Loads!!! Great looking ones too! Clean and bright coloured. Isaac would love to sit in them - we don't put the coins to activate them though, don't wanna let Isaac get used to that and demand it next time - like how I used to when I was young HAHAHA... but at that time it was only 20 cents ok... now it's like at least 50 cents to a dollar. 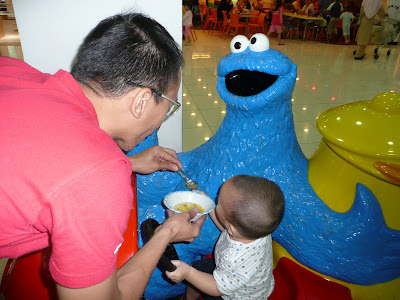 Anywayz, coz the rides look great - they're a treat to sit in already. Gosh, I would love to jump in them if my butt could fit in! :p Yes, I do reminisce about my kiddy ride days... reliving them vicariously via Isaac now! kekeke... 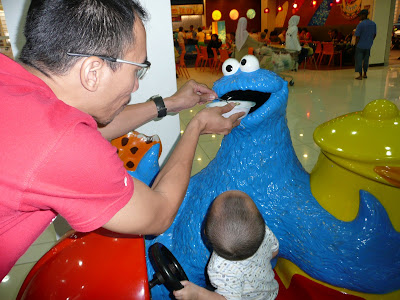 See hubbs feeding Cookie Monster? yeah... we've resorted to feeding toy characters to get Isaac to eat... hahahhaa... Actually Isaac's quite good with eating his meals usually. Though of course, sometimes he has his moods. And he's sometimes restless that he wants to walk and play with stuff while eating. We try to put him in a high chair or something like that when he eats, but he can't last more than 10 to 15 minutes in them. 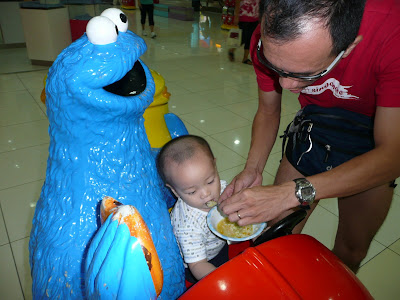 So, when we're in IMM, the kiddy rides act as our high chair for Isaac. It's great, coz it keeps him entertained and in one place while we try to plough in the food. 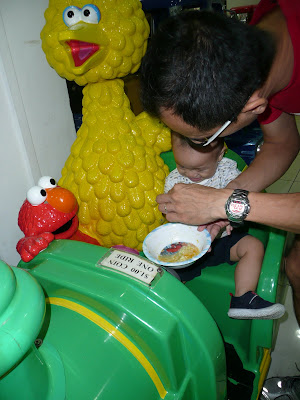 Not sure if I mentioned, but in the past when Isaac was younger, he used to prefer balls over cars. But now, Isaac's beginning to like cars and vehicular like stuff. He still likes his "ball ball"s , but now it's "car car"s too. Hehehe... I am pleased! Time to take home my collection of Matchbox cars, Micro Machine cars and Tamiya cars back from my parents place! woohoo! :) 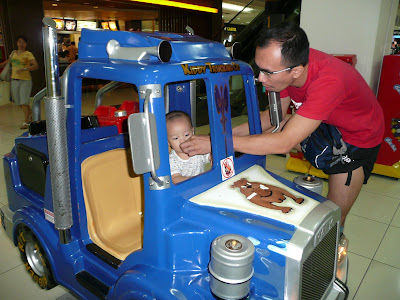