I think all parents would probably remember the phase their kids go through when they don't wanna wear clothes! hahaha... 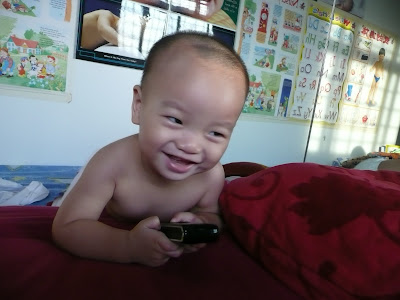 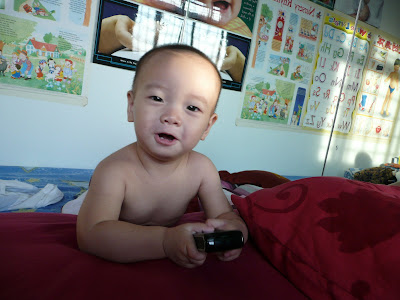 Here he is, preferring to play with my mobile phone rather than put on clothes. Speaking of which, my phone has died a horrible slow death. hahaha... okay nothing traumatic really happened to it (not like how hubbs phone died when he jumped into the lake in sentosa - poor phone literally drowned and rusted in salt water). 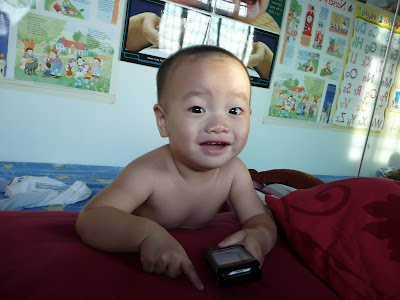 You see, Isaac loves to play with our phones. And usually, we let him - especially if we needed him to be quiet, like in church or something. Well, he's dropped the phone many times. But then again, I'm not the most careful person on earth either, so my phone's been dropped a fair bit. But of all my past phones, this is the worst so far! Worst in the sense that it can't take the rough wear we subject it to... so... after weeks of auto-shutdowning on me... it seems that it has auto-shutdowned on me... FOR GOOD!!! *sob*sob* heart pain the contacts rather than the phone really... 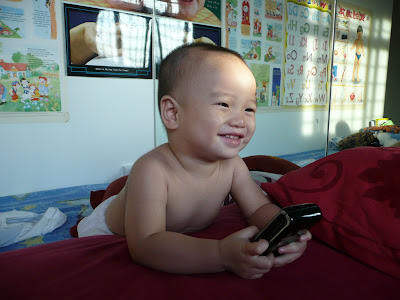 So, I'm currently using one of my old phones, which is also cranky as hell and auto-shutdowny. Sighz. Looking forward to getting a new phone, but we can't decide which. The new fancy big screen ones with high resolution cameras look great, but we suspect, are quite fragile and not good for rough wear too. Sighz. am tempted to get a simple phone. But then, phones with cameras are nice... sighz... we'd see... meanwhile, forgive me if I ask:"Sorry, who are you huh?"