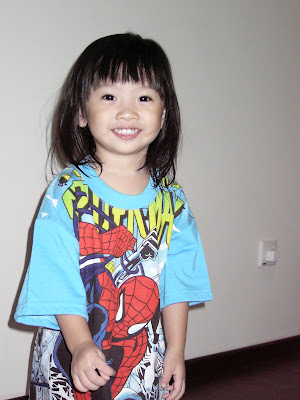 Hahaha at that time, Isaac wasn't even conceived yet, so I had to impose my Spideyness on someone, right? hehehe... 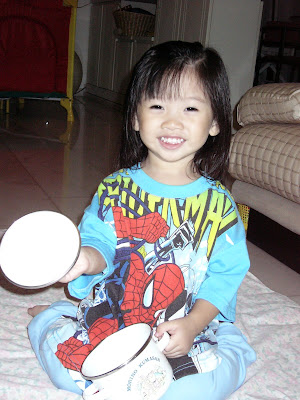 Becca took to Spidey pretty well. She knew that I liked Spidey, that I was the one who gave her those over-sized tees that she could wear to sleep. She wore them pretty often at that time. 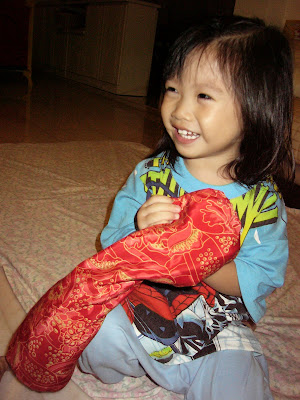 Doesn't she look fantastic in them?! :) hehehe... well, she was alright with Spidey, till The Disney Princesses entered her life, thereafter, Spidey got relegated to Ee-ee only, and then when Isaac came along, they naturally wanted their mum to buy Spidey stuff for Isaac when they see it. hahaha fine with me! :) 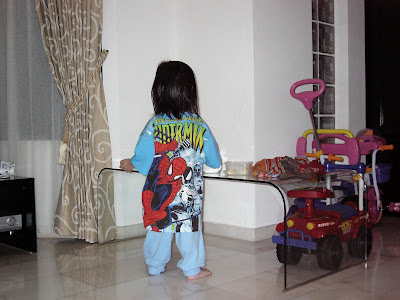 And lookie here below!!! It's my Isaac in the same Spidey tee!!! hahahhaa... 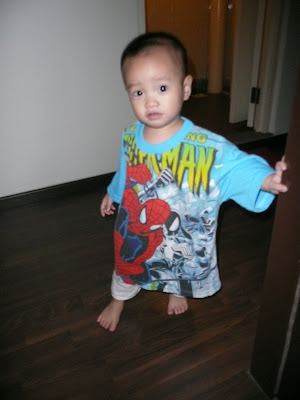 Still it's kinda big for him, and a little too airy for me to want him to sleep in that. So he hasn't worn this very much yet. But looking at it now, he looks so cute in it! hahaha... Should get it out for him more often :p 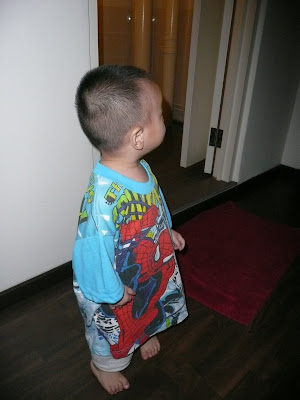 pix above taken on 11th November 2008
Isaac @ 15 months plus
Oh, did I tell you that Isaac has his own name for Spiderman? He calls it "Den Dar" hahaha... I don't know why. Just that a few months ago, I noticed that he would consistently point at pictures of Spidey, or toys or whatever of Spidey and say "Den Dar". So, now, we'd say "Go get your Den Dar bottle." and he understands that it's his Spiderman water bottle he has to get. He understands when we say "Spiderman" we are refering to his "Den Dar" as well.