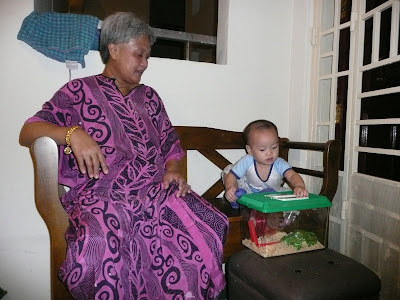 pic taken on 9th October 2008
Isaac @ 14 months
This is taken just outside our front door, in the common corridor we share with this neighbour of ours - their door is just adjacent to ours, on the right. So, this auntie, is our Malay neighbour. They're very nice and treat us just like family! :) We like them too!

Auntie & Uncle has 3 kids, two daughters and a son. The oldest daughter, Sutinah, is married to a police officer, and expecting their first kid in May this year. The son is in army now, in civil defence. And the youngest daughter is in ITE. Actually, we dunno all their names until we went to Sutinah's wedding. hahaha... now we only know her name and her hubby's - which currently slips my mind ;p

Anywayz, they love to play with Isaac. So, they're constantly trying to find ways to entertain him . So one of these ways was with the hamster that the youngest daughter brought back one day.

Initially, Isaac was very curious about the hamster, but yet, a bit wary, hence he didn't dare to go near the hamster cage at all. However, in no time at all, Isaac would come close to the plastic cage and look at the hamster closely.

Then he proceeded to want to touch the hamster. Even going so far as to put his hand into the plastic cage to try to catch the hamster. Or he would shake the cage - though we would always stop him! "Isaac! Don't be so violent!" we'd exclaim!

I knew it got a bit out of hand when one day, Isaac tried to climb into the cage itself!!! Gosh!!! I was like "ISAAC!!! NO!!! You're NOT a hamster, okay?!" geeez!!! but it was hilarious!!! we were all laughing incredulously at what he was trying to do. I think Isaac actually wanted to get into hamster's home to play with it! hahaha...

Well, we recently learnt that dear hamster has passed on. We'd like to thank the lil one for the entertain she brought us, and in the same breath, we'd like to apologise for all the terrorising Isaac has done - though we have been reassured that the hamster's death was in no way due to Isaac - whom we always managed to stop in time before any damage was done.

Thus, we'd like to assure everyone that no hamsters were harmed in the production of this blog post.