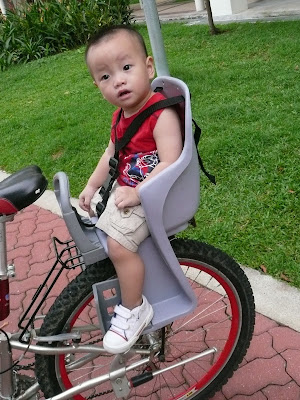 We finally got around to installing a child seat on one of our mountain bikes, for Isaac to sit in. It comes with the seat belt, which we thought we'd have a problem having him agree with it being put on - but seems like our fears were unfounded - he didn't seem t mind it at all! Which was such a relief for us! 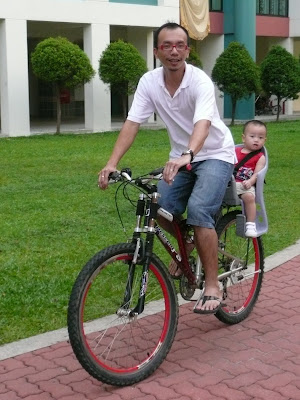 Here's hubbs having a go on the bike with Isaac first. I was kinda scared at first to get on the bike, coz I scared I'd not be able to balance with the additional weight at the back. Plus I had not ridden for a long time, so... wasn't confident of ferrying Isaac yet. Guess I was just afraid that we'd fall and Isaac'd get hurt. 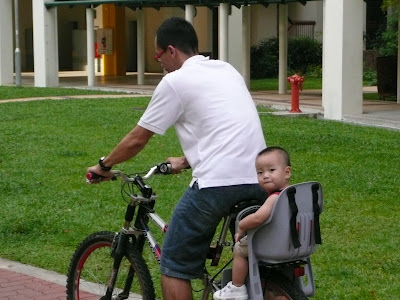 Isaac had a blast! :) He was really enjoying himself, though it was kinda a subdued kinda expression he was carrying, not an 'ecstatic' one. But we could tell he really liked it. He kept asking to continue. Think he liked the motion of it, and the wind in his face.


We were taking the vids and pix, and was trying to get him to wave bye bye to whoever was behind the camera, and he did - belatedly! hahaha... if you see the wids, you'd see him waving, AFTER he passes... hilarious though! hahaha... 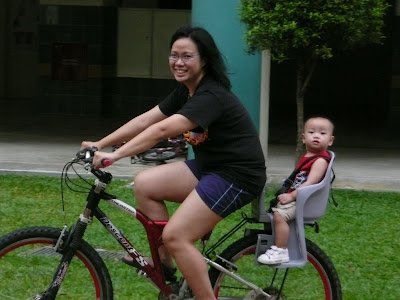 Here's me with Isaac. hehehee... I finally decided to give it a try. My fears were pretty much unfounded. I took to the bike pretty well, reminding me of my bike zipping past hahaha... I love cycling. When I was in primary school, I'd used to go cycling round the blocks with my primary school friend Shuwen. We used to cycle to JE Burger King to get a burger, and a Mr Softee at the 7-eleven after.

In secondary school, I managed to convince my dad to get me a mountain bike for my birthday. And boy did I go places on that! During the school holidays, I used to cycle all the way from my home in Upper Bt Timah, to my secondary school Crescent - which was in Tanglin Road. Quite a feat, eh?! :) I remember the time in JC too, when I went cycling with the Odac guys - Ruiwen, Junxiong, Huijie and Shaoyong, to Pasir Panjang, to meet Xiaofeng, who stays there! hahaha... At night too! What fun! :) ah... those were the days...

Here's me on the bike with Isaac! woooohoooo!!! :)