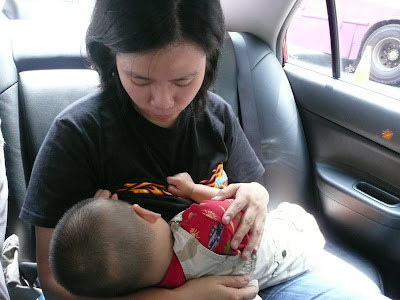 Yes, this is me, feeding Isaac in the car again. On this day, 8th November 2008, I was very sad. Coz hubbs had decided that I was to wean Isaac off. Was a very sad day for me. I spent the whole day whispering and talking to Isaac, telling him that I still loved him even if I didn't let him drink from me. Dunno if I am paranoid, but that's what I fear - that he thinks I don't love him anymore if I deny him my milk. 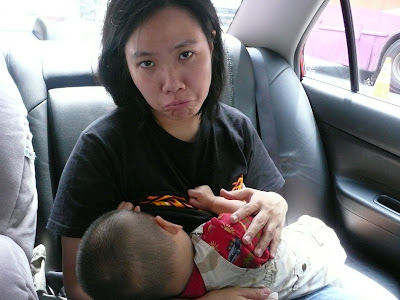 So, you see here, I got hubbs to take a picture of my sad face. And of me feeding Isaac in the car. See how he clutches my shirt? When he was younger, he used to always reach out with his hand to touch my face. Now? he doesn't, now, he knows how to pull my shirt up and away from his face - guess it's disturbing him - but then - my modesty!!! sighz!!! I'm always like going:"Isaac! Stop it! The uncle in the lorry/bus/motorcycle can see mummy's breast already lah!" 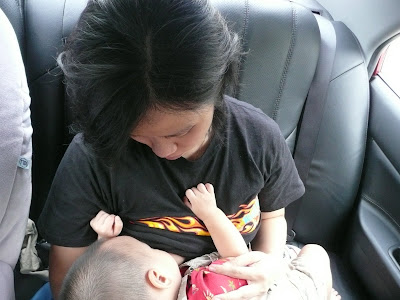 Oh, and now, he also know how to "choose side" already. Side? hehehe... which side to drink lor! hahahahhahaa... That's why he knows how to say "this side" - coz I always tease him by asking him:"Isaac, which side you want to drink?" Then he'd point to either side and say:"This side." Hey he's serious one okay, if he chooses one side, but (for whatever reason) I want to feed him the other side first - he will shake his head, point at the breast he wants first, and say:"THIS SIDE!". Luckily, he's quite even - will sometimes choose right side, sometimes choose left side. And after he drinks from his chosen side, he will always drink the other side as well. So no uneven breasts for mummy! kekeke... 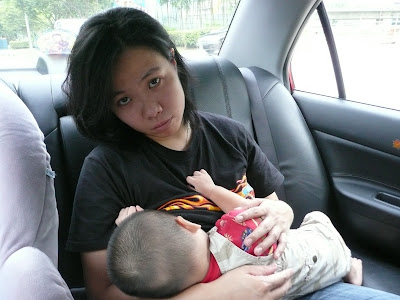 So did we wean off? Well, obviously not. HAHHAHAHAA... Think at that time, I managed to wean him off night feeds, meaning that he slept through the night without drinking. But during our trip to usa, it was all messed up already. Coz firstly, on the plane, my boobies were the BEST weapon for keeping him quiet. Was especially useful for take-offs and landings, coz we were afraid his ears would hurt. But actually he was very well behaved on the flight. Think, was coz he wasn't eating well, coz it wasn't his usual porridge or rice, so I was inclined to let him drink when he wanted to.

Then just before CNY, we were like determined to wean him again, coz we thought we had better get down to making Baby #2. So hubbs said that after the 15 days CNY, we'd wean him off. kekeke... guess what? He's still drinking! hahahaha... we're kinda resigned to the fact that I may have to nurse through pregnancy.

Well, I'm hoping he weans himself off like Jeddy did. At least he's eating powder milk, right? Also, one morning, he didn't drink at all in the car, coz we gave him a piece of bread and he was happily eating that. So.... little victories, bit by bit... we hope, and pray... hahahaha... right now, we're just hoping to conceive!!! pray for us!!!
Posted by Pamela at 07:23