So guess what? here we are on the plane - Isaac that is! kekeke... We couldn't resist taking pictures of Isaac in the thingy - sh*t, I can't recall what they call it. And basically, we were either too busy or otherwise occupied at any other time to really bother with the camera. Kinda regret it though - I love airline food - should have taken pix of the spread SIA had for us. I think I've had better, but it's been a long time since I sat long hual, so it was good.

Oh it's also hubbs' longest trip away from Singapore yet. So he was pretty excited too. And Isaac - I think he was just plain happy coz he was with his Papa and Mama all the time :) 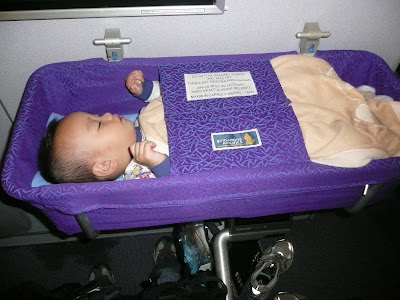 Anyway, Isaac was well behaved most of the flight to San Francisco. It helped that we had an evening flight. So he was amused with the plane, with flying, with the tv etc on his way to Hong Kong, and after HK, he was kinda tired and fell asleep pretty easily.

SIA has this belt thingy for kids sitting on parents' laps, it's kinda like attached to the adult belt. Pretty nifty - simple but effective. Isaac wore it alright - if he didn't know he was wearing it. if he knew, he easily wriggled outta it. But for all intents and purposes, I thought it was a good contraption and would serve its purpose well in times of turbulence. 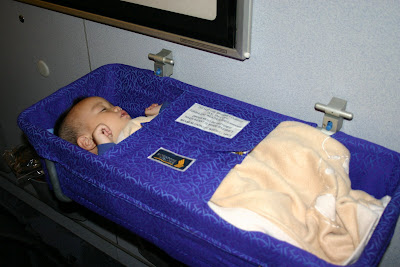 pix taken ~ 29 November 2008
Isaac @ a week to 16 months
When Isaac fell asleep, we tried putting him in this crib thingy. He could JUST fit in it - he was actually taller than its length, but with his knees bent a little, he could jusst fit in it. He was all cosy in it too, was good for him when he is sound asleep.

I put the infant seatbelt on for him so it was pretty safe, and kinda had to balance him on me the whole trip. Thus, it was quite a tiring trip for me coz I had to be kinda mindful of Isaac. Still, I can't complain coz Isaac was generally very well behaved on the flight, so was glad for that already! :)

When he woke, sometime before we landed, he would play with the little milk cups and butter portions - he would stack them up - stacking being one of his favourite activities. I would also collect the plastic cups so that he could play with them, that kept him entertained for awhile too.

Then I tried surfing to the menu pages of the kids programmes, and he actually recognised Barney, and signaled that he wanted to watch Barney! hahaha... So he caught a lil inflight entertainment as well :)

All in all, it was a good flight. Oh! Isaac didn't take to the food though - so I was on tap again - the 24 hour moo moo mummy! :) He didn't even take the ice-cream we offered him - paediatrician had told us to try ice cream as a last resort, coz at that time, Isaac wasn't taking any other milk at all. But even ice cream was a no go. Ah well, hubbs was pretty pleased with that. haha...