We meet the girls! 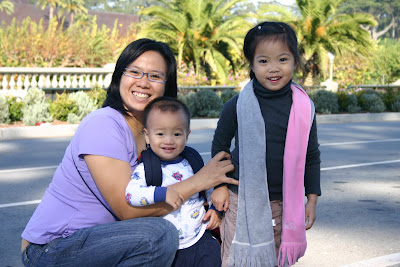 Ain't this a pretty picture? I love it! :) hahaha... Isabelle's a big girl already, huh. So is Becca and Natalie! We were mighty pleased to see them, and so was Isaac! 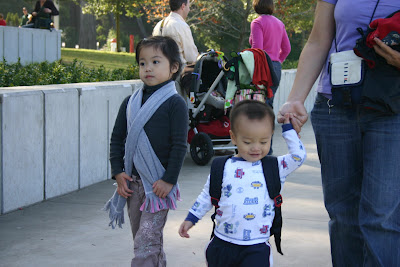 Below is Natalie in her winter jacket, in the stroller. Being 3 months younger than Isaac, Natalie had only just started to walk. So, for going out, she still sat in the stroller most of the time, as she wasn't strong enough to walk long distances for a long time yet.


Then again, Isabelle certainly is strong enough, but she wants to sit in the stroller too! In fact, my sister says that it is usually Isabelle in the stroller, while they carry Natalie. Hahaha... but since Isaac was walking, we managed to convince Isabelle to walk too! We'd say:"Isabelle, you see, Isaac also walking, why don't you walk too?" And she would! But she'd INSIST that Isaac walks as well, so when Isaac got tired and wanted us to carry him, Isabelle would exclaim immediately:"How come Isaac never walk!? Then I also don't walk?!" Or she would try to drag him down to walk as well... hahaha... well, as you can tell, the two of them hit off immediately. 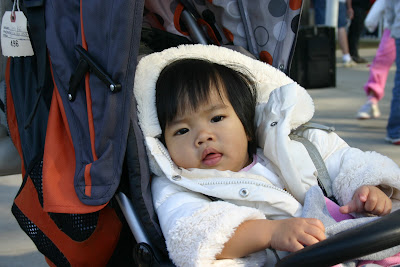 Isaac and Isabelle were like long lost best friends. They really enjoy playing with one another. Isabelle would be very curious with everything about Isaac, and would enjoy teasing him and making funny faces and funny noises and silly actions which would make him laugh. I guess Becca and Natalie were all very used to Isabelle's nonsense and wouldn't react as much, so now with a captive audience, Isabelle was most pleased. 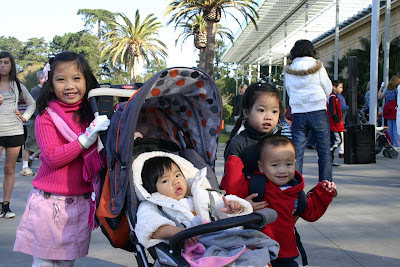 Isaac too was very pleased that his Isabelle cheh cheh was playing with him all the time. Greatly amusing to him! But as all things go, there are limits... hahaha... Isabelle can be very pushy and insist that things are done her way. So, as you can see in these 3 similar pix - Isabelle is insisting that Isaac stands at a certain position and she is 'forcing' him into position... 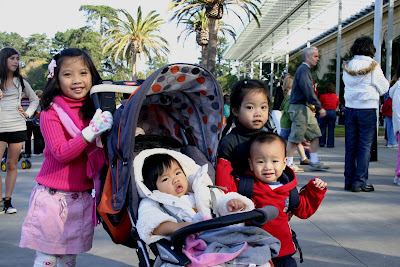 And Isabelle is one strong gal... so as you can see, Isaac is already feeling uncomfortable... hahaha... But by and large, the two of them had a great time playing with one another. In fact, by the end of the trip, Isabelle was exclaiming that Isaac was her best friend! When my sister asked :"Oh? I thought Natalie was your best friend?" She replied:"Both Isaac AND Natalie are my BEST FRIENDS!!!" hahaha... 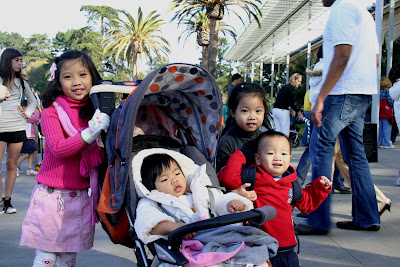 Anyway, we're mighty pleased the kids got along with Isaac very well. So we're looking forward to them coming home soon - in June I think! :) 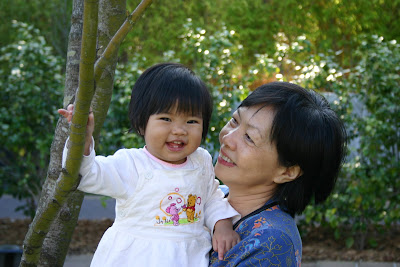 At the time of this trip in December 2008, Chris' mum - my sis's mum-in-law (above) was there to help them out, as my mum had just returned to Singapore in November. Currently, my mum is there, she went up straight after Chinese New Year, and will be back in Singapore in May this year. In fact, my dad is also currently there! He went up late March, and is coming back this Sunday. 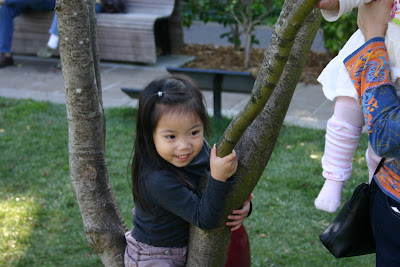 Here's Isabelle climbing on the tree. Kinda reminds me of the scene in Sound of Music when the kids were climbing trees hahaha... 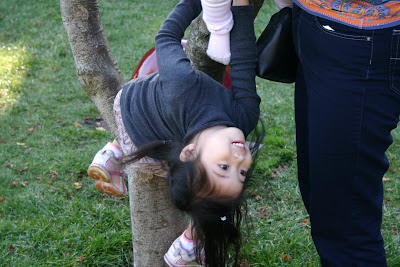 There was something we noticed though, when we were spending time with my sister and family. We noticed that they are now not as uptight about the kids getting dirty. I mean, not that they were very uptight before, but as in, you know how most of us Singaporean parents would like: not really let the kids roll on the grass, climb trees, play with sand with bare hands, sit and crawl in the sand etc - coz it's DIRTY??? Well, it seems like my sister's family is not as uptight about that now - it's like - "Dirty, then wash lor." kind of attitude. Hubbs and I discussed it, and we think it is quite good really. Why be so uptight, right? "Isaac!!! Dirty!!! Stop it!" hahahaha... 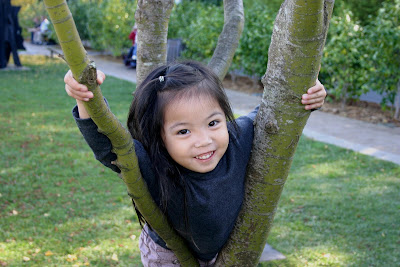 Oh I forgot to mention - these pix here - are all at the Golden Gate Parks. Very nice, got museums and all. I know you guys are all looking forward to our usa pix right? Don't know if you'd be disappointed though - coz I realised that actually, most of the pix we took, are more of Isaac and the girls, than of the scenery etc. Also, actually, we didn't take as many pix as we used to. Coz more than half the time, I was busy looking after Isaac to take pix. Also, I was still sulking that I don't have as much nice pix with Isaac as hubbs does - so hubbs was trying his darnest to prove me wrong. It was sweet of him - he kept it up quite a bit, but it died off too. So in the end, we didn't have that much pix from this trip. Kinda regretting it now. hahaha... sighz! Can't be lazy! once the moments have past - they're gone!!! I'm a Chronic Chronicler!!! HAHAHA! 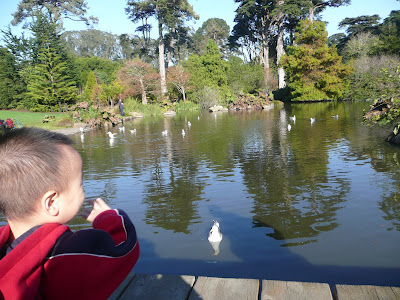 What can I say, another fairly excellent picture (trying to be modest here by using the word "fairly") of hubbs with Isaac - with BOTH smiling and looking good. sob sob sob. Well at least I always have nice pix in my wallet... *self*consolation* (is better than no consolation) hahahhaa... 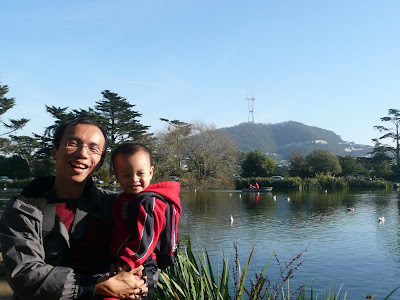 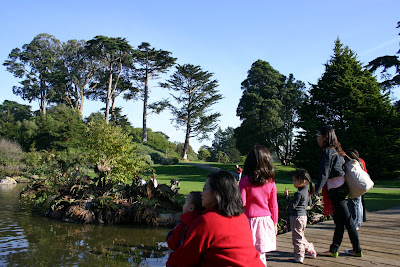 Ah... two very good tries. Above, hubbs nicely catches me with Isaac, and my sister, Becca and Isabelle in the background. And below, it's Isaac's fault that he's not looking and smiling right? Not hubbs' fault what... *wink* :p *grinz* 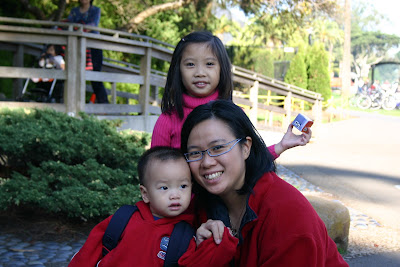 Ah! Found a picture of the grounds outside the museum. Nice huh! :) We came back again on our own another day, so maybe a later post would have more pix here. Stay tuned! :) 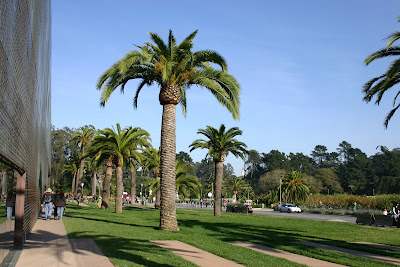