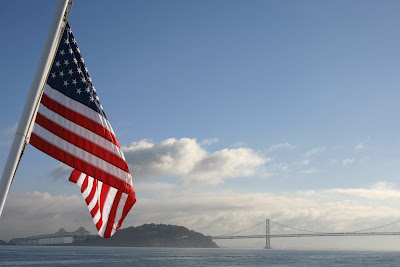 Hehehe... nice pic? kekeke... I used to have a 'fetish' for images of american flags. Kinda died off, but still quite like them. No particular reason. Well... when I was young, I used to read the encyclopedia for fun, coz it was interesting.

hahaha actually it was coz my dad was pissed that he spent a ton on a set of encyclopedia and yet neither me nor my sister was reading. So he refused to answer any of my "Why...?" questions and would always reply me:"Go and check the encyclopedia." After many such replies from him, I was so frustrated that I wasn't getting my replies that I really went to read the encyclopedia.

And what fun it was! So much info! I was intrigue, and there started my love for reference books. In fact, I used to run to the living room to grab a volume of the encyclopedia before racing off to the toilet to do my big business! hahahhaa okay okay *too*much*info* hahahhaa...

Coming back to why I started telling this story - the first encyclopedia we had was an early edition of World Book Encyclopedia before they came up with the Global version, i.e. it was very America-centric. Anything about America had tons of info, for eg like information about the different states, and the Presidents of the United States etc... Thus, these are info which I know more about compared to the average Singaporean.

Hahaha... ah yes, thus the fetish about american flags and all things american. Well as some of you may know, this is the total opposite of my dear hubbs who's more China-centric than me American-centric. Or rather, he's cheeena-centric and me angmo-centric!hehehee 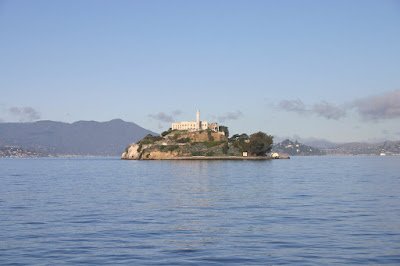 ALCATRAZ!!! The famous prison island!!! Okay, it was the prison island that was in the film X-Men 3 - The Last Stand! It has been featured in many other Hollywood films, like The Rock, and Escape from Alcatraz. It's no longer a prison but has been turned into a tourist attraction. 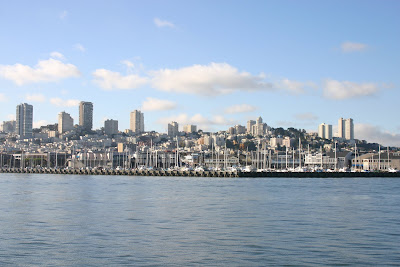 View of San Francisco from the ferry ride out to Alcatraz. The prison has small windows and little slits in its walls which the inmates can look out from and see this view. In the silence of the night, they can also hear the sounds of the night-life in San Francisco. It was said that this would really taunt the prisoners, constantly reminding them of the life they are missing out on by being in prison. 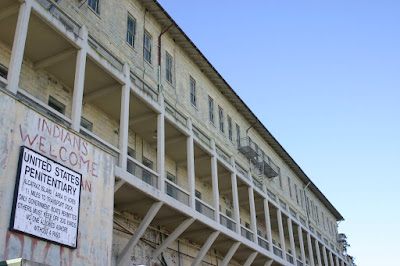 American Indians lah... :p Apparently, after it was not a prison anymore, at one time, the government resettled a community of Native American Indians there. There was this documentary we watched there on this topic, very interesting! Read more about Alcatraz at their official website. 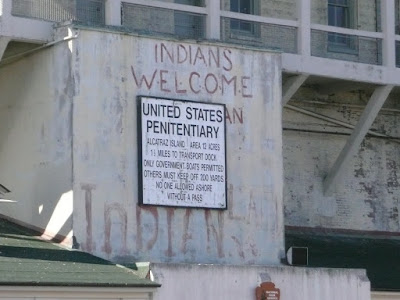 Look here below - it's the water tower I think hahaha... think it was "featured"in X-Men 3 when the final battle was taking place and they were throwing stuff around! 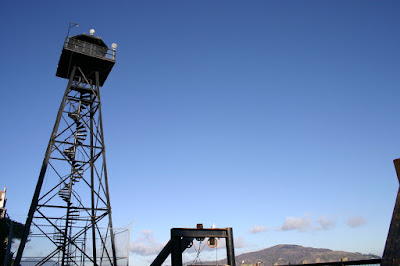 Bored with the tour guide's commentary on the prison island, Isaac was spending his time with his other pursuits... 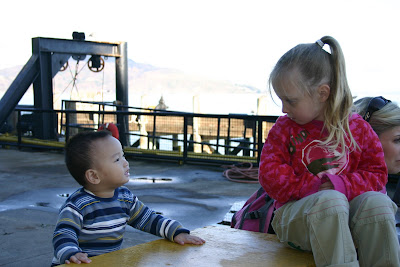 Jialat. Chat girls up not enough, still want to touch her hand... sighz... 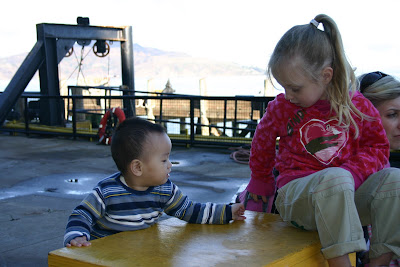 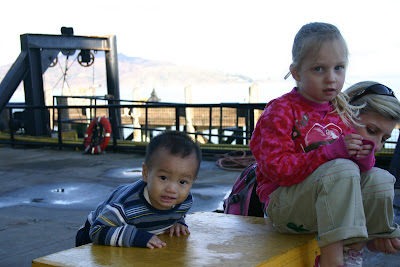 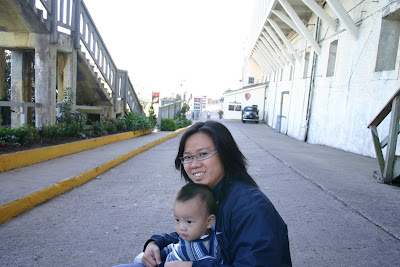 We walked down the road, and up the hill and entered the main building where we were each handed a set of earphones and a tape player thingy. It's quite cool, the audio commentary can be started and stopped by yourself since we each hold our own set. 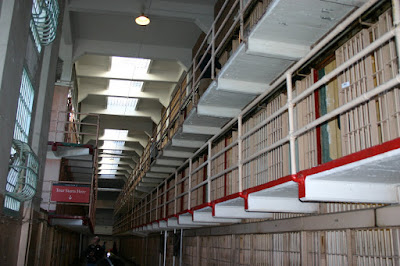 But you hardly need to do so, coz they time the audio commentray very well such that you just listen to instructions and walk where they tell you to, and listen to thei commentary on what you see around you - fantastic!!! 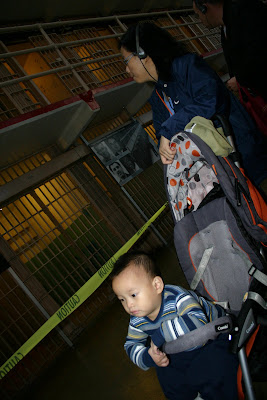 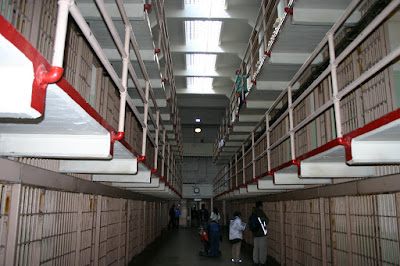 Look at the rows and rows of cells!!! Shawshank!!! 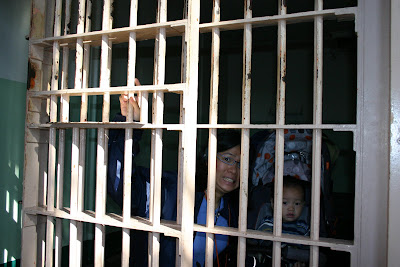 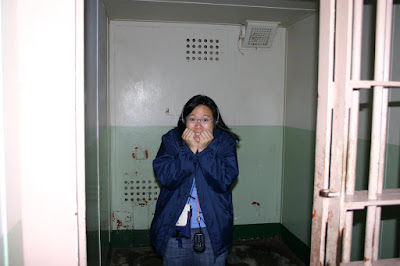 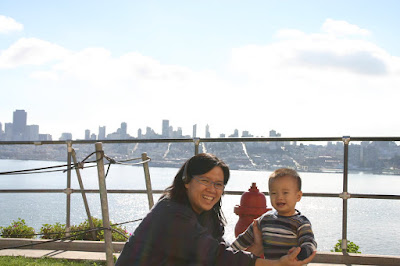 Look at the mugshots of the escapees! 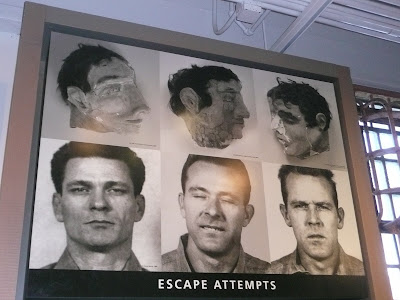 The inmates had a lot of rules to live by. There was even a rule book! I bought it! kekeke... will come in useful next time ;p 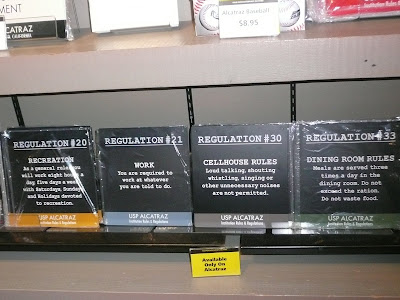 Here we are, leaving the prison island The Alcatraz!!! 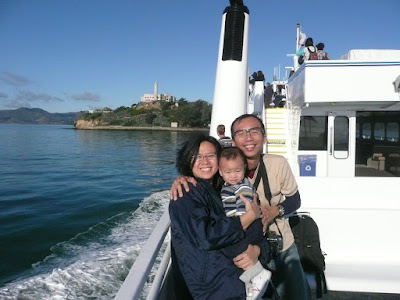 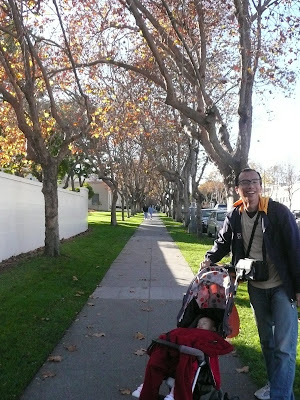 Here we are back on mainland, went for lunch at a nice Italian restaurant while Isaac slept in the stroller. As we had a late lunch, we more or less had the whole restuarant to ourselves. Hubbs even had a glass of wine to go with his meal. Sweet! 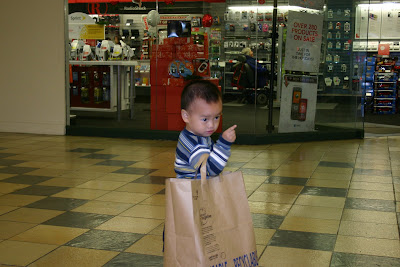 Afterwards, we got him some food and bought stuff to cook for our dinner at this shopping centre near the piers. 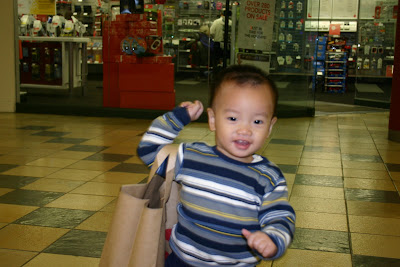 Isaac would always want to imitate us - including carrying paper bags! We usually empty them except for one or two light items, and let him carry it. Bother! 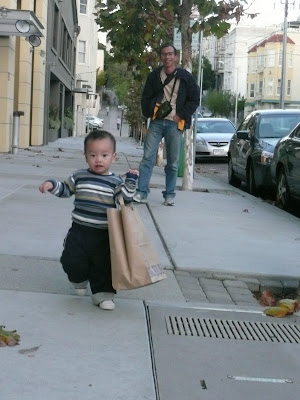 See, we took the public bus back to our hostel! They have a map that's very comprehensive - even has all the bus routes and bus stops on it. Hubbs didn't know how to read the map - luckily I could figure it out! hehehe... 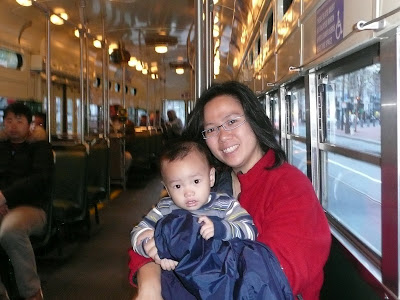