Down to the piers 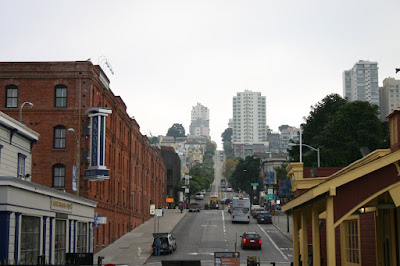 After lunch, we walked down to the piers, nearer the water. 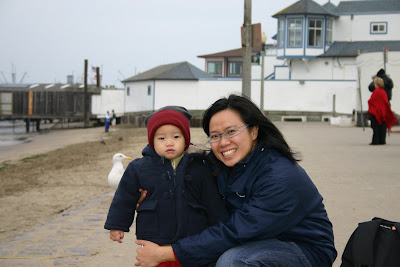 It was pretty cold as the wind was blowing, so we wrapped Isaac up in many layers, and made him wear a cap. He kept pulling it off though! Managed to catch these two pix before he pulled it off. 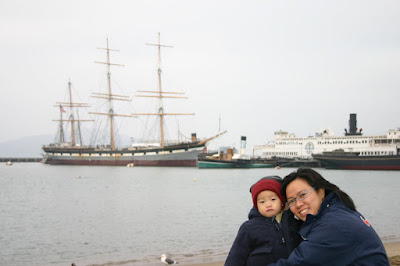 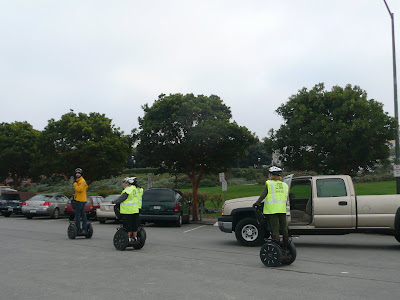 Look what we saw? A Segway tour! These two wheeled vehicles are amazing! Apparently they have a self-balancing mechanism in them, such that it will automatically adjust itself to be upright, even when the rider shifts their body weight. 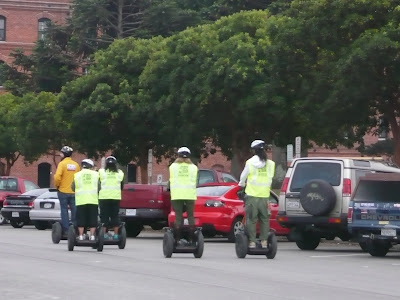 We wanted to take the tour - but as Isaac was with us, we couldn't coz where would we put him? And no, it's not an option to piggy-back him and ride the Segway... No, coz I say so :p Well, apparently, there is Segway in Singapore already! Heard that you can ride one in Sentosa... 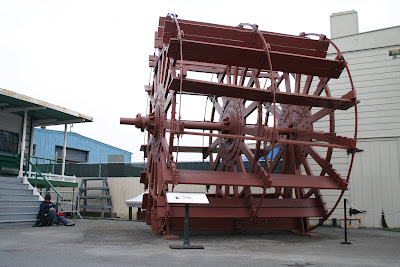 Can you spot me and Isaac in the picture above? kekeke... Here we are in the bottom left hand corner of the picture :) 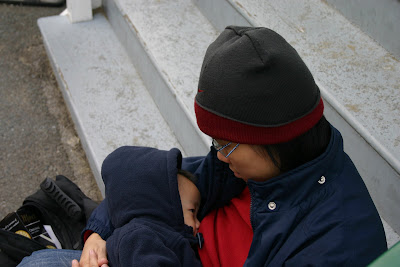 No prizes for guessing what Isaac is doing! :p hehehe... 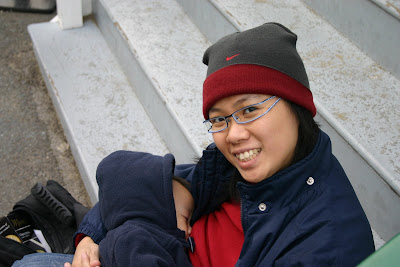 Yeah, Isaac was all tired out and it was nearing his nap time, so he latched on and quickly dropped off to sleep. yay!!! We quickly placed him in the stroller, and we could have WE time!!! 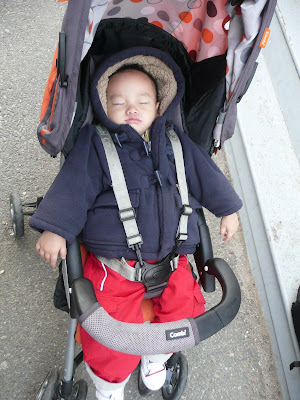 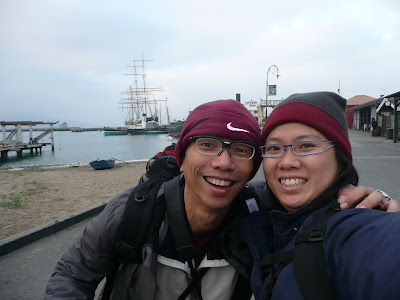 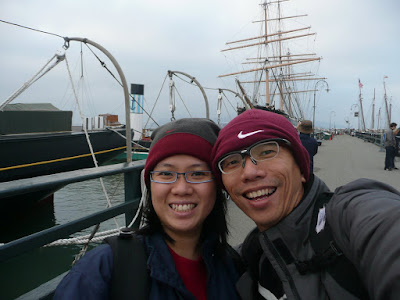 It is slow, travelling with a kid, coz you have to feed him, make sure he's dressed well, change his diaper if he defecates etc. BUT, it is not impossible to travel with a kid. Yes, it is slow, but we still enjoyed ourselves very much and had lots of fun. You also see the world through the kids' eyes. 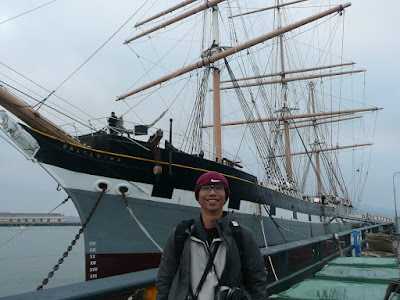 So! To those couples who say that they don't want to have kids coz they "want to travel" - well I say HAVE KIDS and STILL CAN TRAVEL! :) So, no excuse! kekeke... 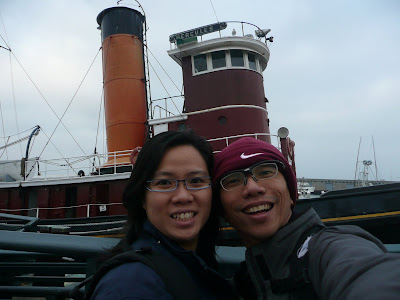 Hehehe... more pix of us. We realised that after Isaac was born, we hardly took pix of ourselves anymore. hahahaha... so we decided to try to make a concious effort to take more pix of the two of us. 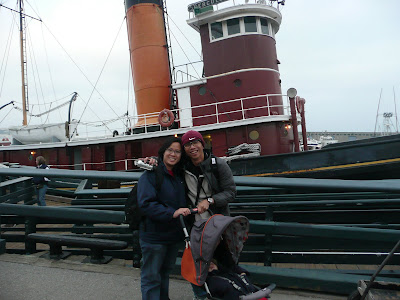 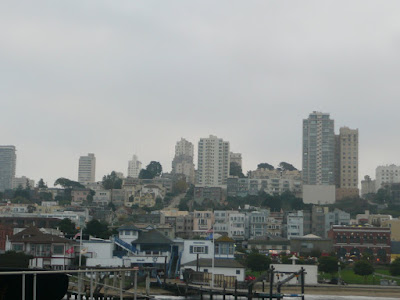 We chanced upon a group of kids, on a school excursion. We've always been interested in how kids can learn about stuff through other means other than conventional teaching. So, we stopped and listened to this lesson going on.

The kids were actually being taught how to lower the boat like how sailors used to do. Basically, they were role-playing sailors! so cool, right?! hahaha... Other groups of kids walking the piers were also role-playing, speaking in uncouth pirate-speak and pretending to walk as though they had a wooden peg for a leg. It was all very fun :) 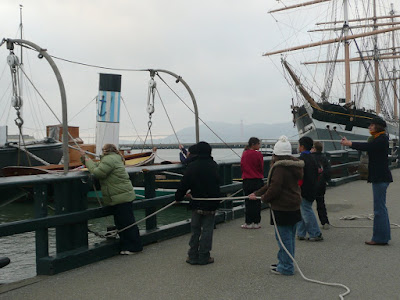 Night fell by the time we walked to Fisherman's Wharf - decided to try some of the seafood sold at the pier stalls. Tried some scampi soup in the bread. Nice to have something warm in the cold weather. 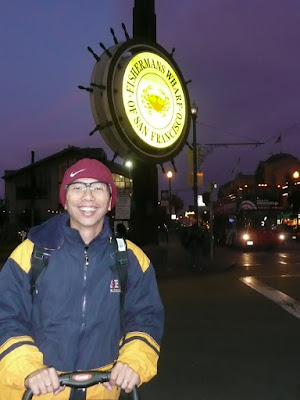 Look at some of the sculptures we saw outside a shop. 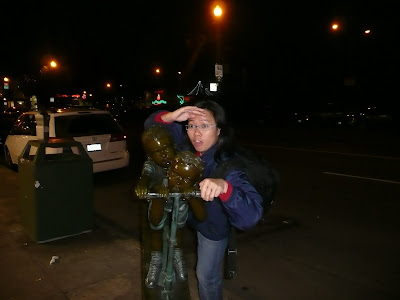 kekeke we did some still sculptures with them too - hehehe hope we haven't lost our touch! 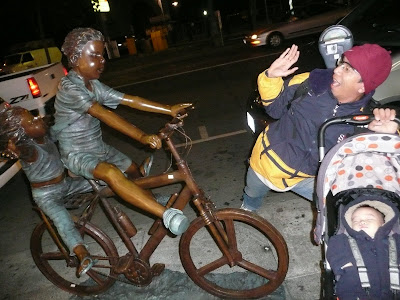 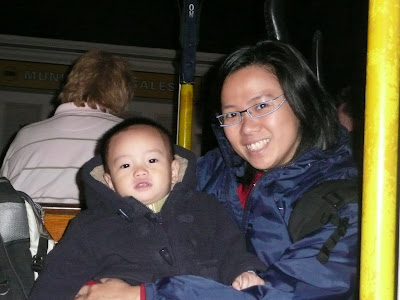 Later we took the tram back to town again. By then, Isaac had woken up already. Look at his duh face. hahaha... 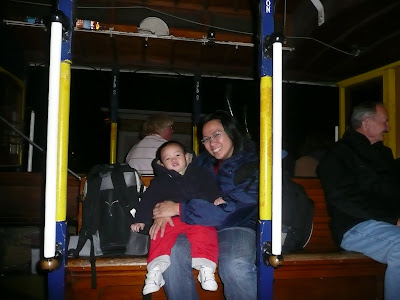 This time, we decided to sit on the outside! exciting! :) I was quite scared and held on to Isaac very tightly. Made hubbs put his arm across us as a sort of safety belt too! 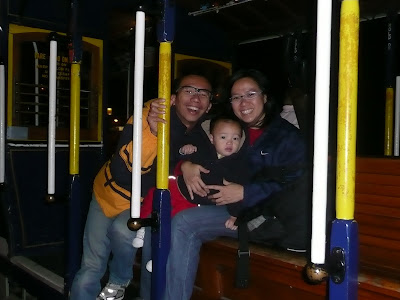 We quickly went in search of food for Isaac as he hadn't eaten since lunch. We decided on a Vietnamese restaurant, since it was the closest food to Chinese food that we could find. Isaac ate a bit of rice and a bit of the beef noodles. 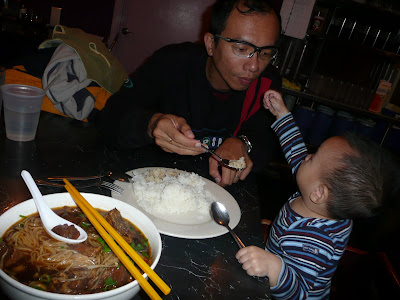 Back in our room, look at what Isaac's doing? During the trip, he started the habit of putting on our shoes and walking in them. He did that for the whole trip! It's amazing that he can balance in them though! haha... 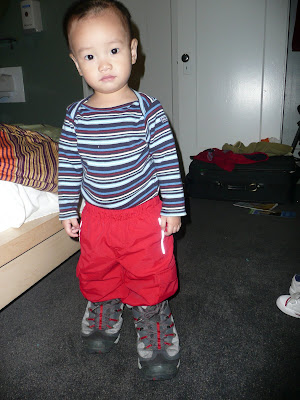