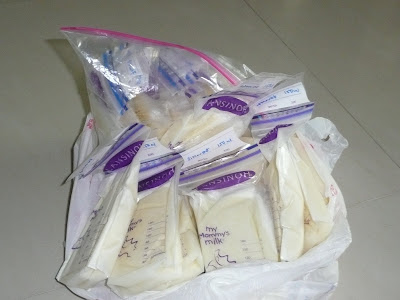 pic taken on 21st September 2009
Actually, I can't recall how old the milk above is really. Probably more than a year old really. Hahahaha... Well, we needed more space in the freezer, and finally decided to junk these.

They were way past the date that made them good enough for drinking. But all nursing mums would know how painful it is to have to throw your own milk away, no matter how plentiful your supply is. Thus, I had delayed throwing away this last batch of frozen milk for the longest time already.

I know of some people who actually defrost their frozen milk (that is to be thrown away), and actually take a bath in/with the milk. Well depending on the quantity to be thrown, I guess. Yet another August mummy, I recall, posted a picture of her milk in a basin, for her to wash her face in. And then, others say they use it to wash their feet.

Why in the world would we use milk for the above?! Well, apparently, coz the milk has a high fat content, so it is very moisturising and supposedly beneficial to our skin. I could never bathe or wash my face with the milk - don't like the smell! Frozen milk that has been defrosted has this peculiar smell you see, not very pleasant. Wash feet, maybe...

I had been offering hubbs and my mum this last batch of milk for them to wash/dip/soak their feet in. But both of them rejected me. Sigh.

Oh, once, I had to bring some chocolate icecream cake somewhere, and I used the milk blocks as ice blocks to keep the cake cool. That was useful.

Another time, hubbs had to attend a secondary school friend's wedding, and he brought along a pack of frozen milk for the groom to drink. Good friend, ain't he, sharing his wifey's milk milk. Except that my dear hubbs didn't keep the milk chilled. He kept it in his pocket and then placed it on the table.

By the end of the evening, I would imagine that the milk had probably gone rancid. But no matter, hubbs & company made the poor groom drink the whole pack of milk. It was a dare more potent that any hard liquor!

Guess what? The groom, drunk as he already was, gamely drank the whole packet of (probably) rancid milk, and promptly puked to no end - emptying his entire tummyful of not-a-lot-of-food-but-plenty-of-alcohol! Resulting in a... sober groom!!! The groom actually thanked hubbs for the sobering milk ;)

So you see how useful milk can be! Milk, anyone?
Posted by Pamela at 11:23