At this time, I am very advanced in my pregnancy with the twins, and my tummy's huge. Consequently, I've much difficultly walking much, and would want to rest all the time. 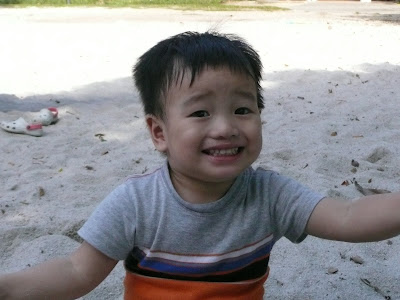 So, on weekend mornings, like this one, we find a neat compromise by going to West Coast Park, have breakfast at Macs (my fast food craving during this pregnancy), and hubbs would bring Isaac to the playground while I stay on at Macs reading the paper or something. 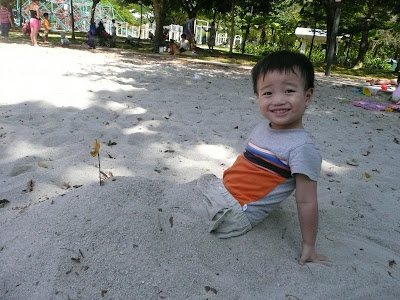 Isaac loves going to the playground. Usually he'd climb the structures and do the slides etc, but this morning, he was into the sand. Literally! :) hubbs told me that he wanted to bury his own legs in it, and asked hubbs to help him do so too. 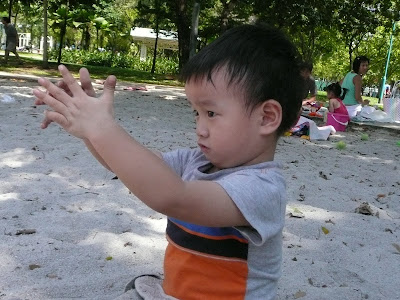 There was one time when I showed my Mum these pix, wanting to show her how cute her grandson was, and do you know what was the first thing she said? "Ah yoh! Wait get sand fly bites ah!!!" :p 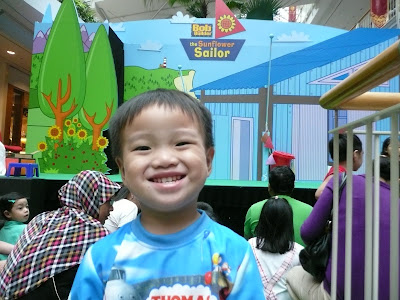 After a nice morning in the park, we went home, took our baths, and went to Jurong Point for lunch. hubbs quickly took Isaac and went to queue to enter the audience area for the Bob the Builder free show at Jurong Point. That's the good thing about staying so near Jurong Point, they have many such promo shows all year round. 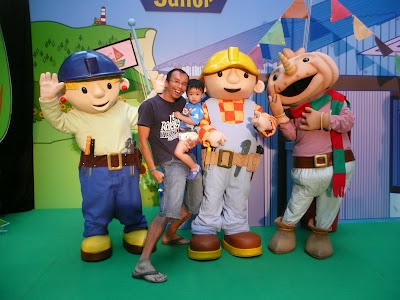 pix taken on 12 December 2009
Isaac @ 2 years 4 mths plus
We once took Isaac to see the Barney show at Expo before, which had other characters, one of which was Bob the Builder. But having tried that, and these free half hour promo shows, we think that these are so much better! Yes, it's free, to begin with!

But, also, it's so near our home - we don't have to travel all the way to Expo or Suntec or wherever for the show. And besides, children's attention span is only about a half hour or so anyway. We found that whenever we brought Isaac for shows, he'd tend to get bored after 45 minutes or so.

It's just little things like a trip to the playground, or a half hour show with a huge Bob the Builder that can make a child's day. Ain't that wonderful!? :)
Posted by Pamela at 13:23