To occupy the time - we had to spend the whole day at our relative's place during Chinese New Year - we brought Isaac's games along, to keep him amused.

This is Hats Off - one of Isaac's first games, after Go Away Monster. 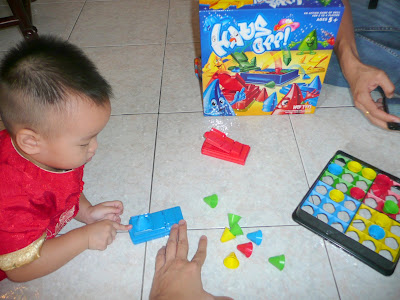 Well, according to the rules, each player takes their own coloured cones, and you're supposed to launch into the same coloured area in the target box. Then you score points for those cones that end up in your colour, but not for those that land outside your colour. 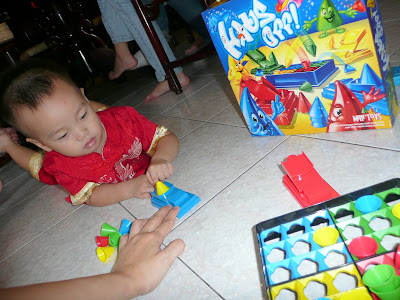 But of course, at Isaac's age, it is an accomplishment to just be able to launch cones from the launchpad. The game box puts it this game as "For Age 5+" but here is my Isaac, playing this game at 17 months.

Here! Enjoy a video of my Isaac launching the cones off - pardon my foot!


Below is another vid... this one of Isaac playing Go Away, Monster! It's been a joy watching him play. When we first played this game with him in Dec 2008, we had to prompt him on where to place the pieces, what to do etc. But by CNY 2009, he knew what to do. It was really a joy to see him grow and develop in that way.

Oh and of course, we brought our 'adult' games too. No, no, not 'x-rated' games - adult games as in games meant for older folks lah, more 'difficult' games than those Isaac can handle. 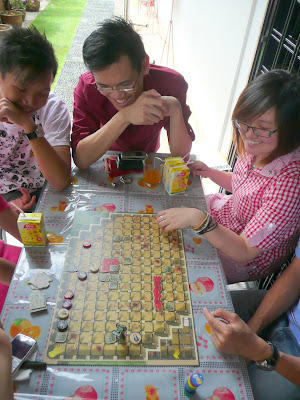 Here's hubbs' counsins and nephews and nieces enjoying Fearsome Floors. Basically the players have counters that represent their team, running away from a frankensteinish monster!!! hahahhaa... 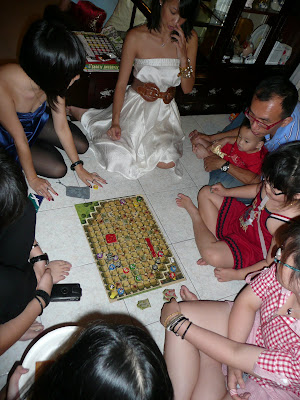 They enjoyed it so much, that they played the game quite a few times that day. 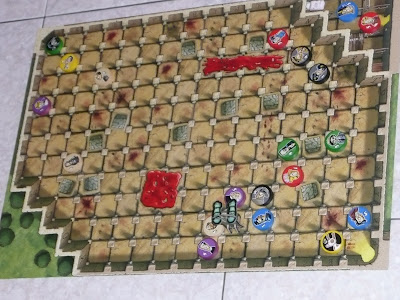