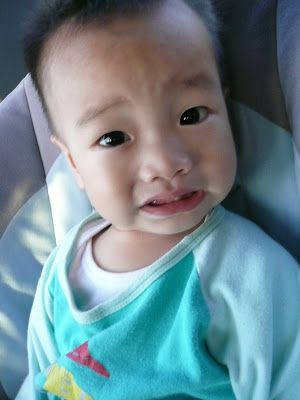 Hubbs and I have always found that Isaac is like me in many ways. He not only looks like me when I was young, but also has several behavioural quirks that are similar to me.

Take this "Too bright!" thing. Isaac, since young (these pix are from Jan 2008, when Isaac was about 17 months old) would never like to have the sun in his eyes. Well, who would, right? But this is different, he was especially kind of sensitive to light.

This is so reminiscent of me - coz I like to sleep in pitch darkness (something we have not been able to do since the birth of Isaac coz I needed to check on him throughout the night).

When I was young, my mother used to think there was something wrong with me coz I would refuse to turn on the lights in the toilet in the morning even though it was still dark, coz I felt that the light 'hurt' my eyes. I would insist on brushing my teeth in the dark. Afterall, I could find my teeth and brush them without having the lights on, you know.

My mother thought there was something wrong with me and brought me to the doctor to ask what was wrong. hahahahhaa... well of course Doc said there was nothing wrong! kekeke...