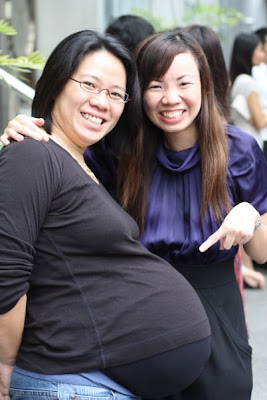 And here's what Hweech is pointing at... two babies in the tummy! hahahaha... The picture below, though, is just an illustration from BabyCenter.com - of how fraternal twins look like in the stomach at Week 36.

Technically speaking, Asher and Shawna wouldn't look like that though - coz we know from recent scans that one of them is breech - head up. Not sure which one, we suspect it's Shawna. 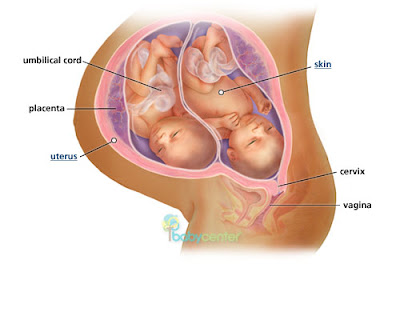 We had a bit of a scare today. I've been having difficulty breathing for awhile now, and heart palpitations are a common occurence for me everyday. But this morning, it went on for a much longer stretch of time, and I almost passed out.

So we got kinda worried and called Dr Ang. Hubbs manually took my pulse rate and it turns out that it was about 120. And this was when it had come down a little already. So Dr Ang told us to go to a GP to get an ECG done. My usual GP didn't do ECGs, so in the end, we went to Mt Alvernia A&E dept to get the ECG done. Just in case I needed to deliver, I could just get admitted.

ECG's some kind of test to check my heart rate and all. Basically, my heart's under a lot of stress coz it has to support 3 hearts in all. Dr Ang is afraid I'd get a cardiac arrest - i.e. my heart cannot take it anymore.

Went in to Mt A at about 12noon , heart rate was 107. Doc conferred with Dr Ang. Yadda yadda yadda... Then was told to rest awhile and test again. It came down to 95. By the time we left the hospital was almost 4pm.

Conclusion is that I have to stay off all caffeinated stuff, and take it easy - which includes not getting emotional and all - anything which will cause my heart to beat faster... if I were to last the year out...

Well, seems like Asher & Shawna may want out earlier than the 6th Jan 2010 c-section date we'd chosen for them. Been telling them that we just want them to be born in January and not December, so hopefully they'd listen to us.

But we'd see how it goes. If they want out, they'd get out. As long as we all make it through safe and sound :) we're happy whenever they want out. Pray for us and wish us luck! :)
Posted by Pamela at 23:59