Hehehee, nope it wasn't a romantic Valentines Day 2009 picnic at Botanic Gardens with hubbs alone. Once you have a kid, you want the kid with you always! :) Instead, we had a fantastic picnic with our friends: Daphne and her friend Peilin, Peishi and her daughter Carrie. 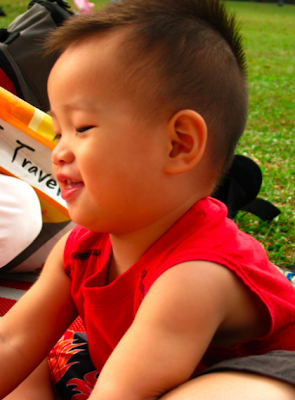 These first 7 pix are taken by Daphne - stole them off her blog kekeke... you can see that her pix looks much better than mine! sigh! so envious! hahaha if only I could take pix like that! Here's the blog post I stole from! 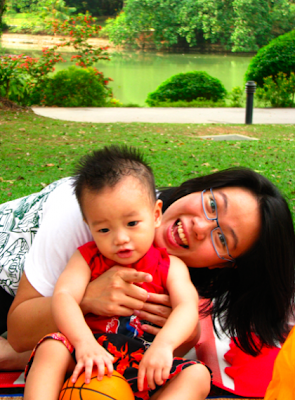 We had a good time, tha morning. Just chit chatting, and eating and playing with the kids. We brought some of Isaac's games, so we were playing Go Away, Monster! and others. 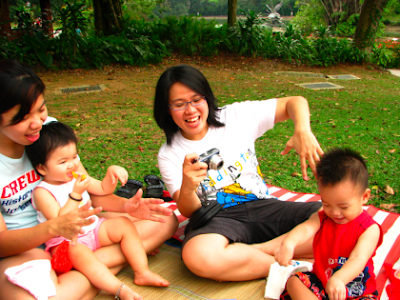 I really like the pictures taken by Daph. The colours look so much more vibrant when compared to mine! Perhaps I should really get down to learning how to use a SLR or at least a semi-SLR or something... sighz! 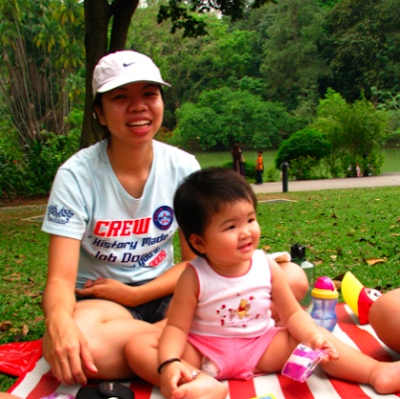 Helps a lot that Daph has the picture sense also kekeke... *whisper* better than me, and better than hubbs definitely! 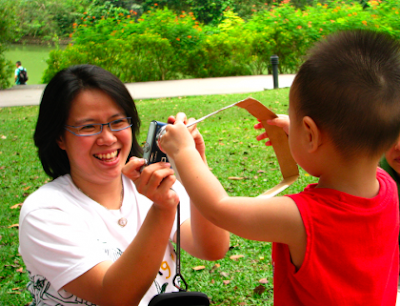 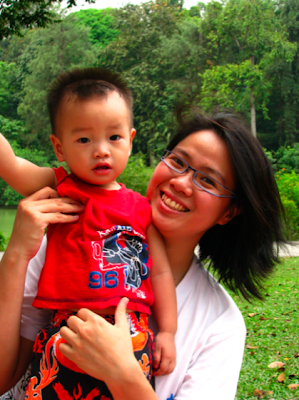 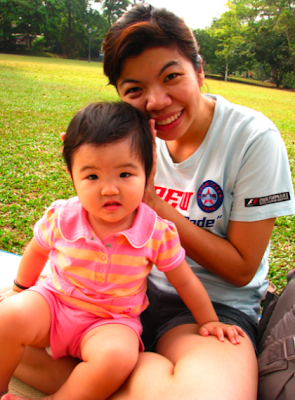 And then here below, are mine pix. Sobs, really gives meaning to the phrase "pales in comparison"... 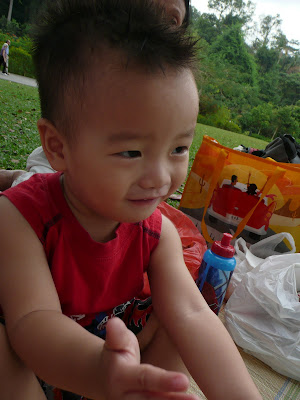 Here we are playing Go Away, Monster! 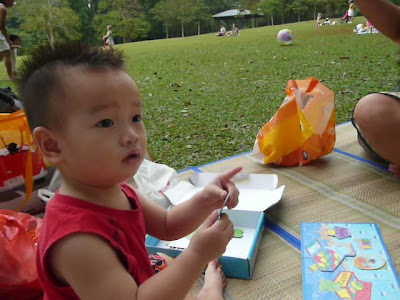 Oh and then hubbs came! Can't recall, think he had to work or something, and so came late. 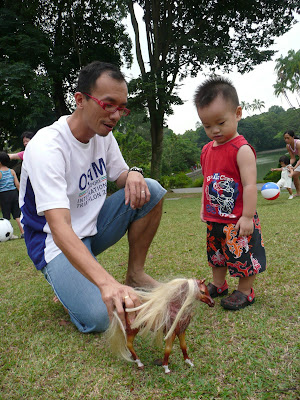 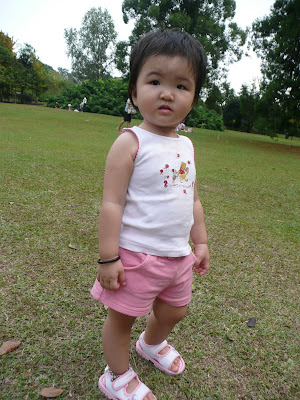 The horse and the dolls actually belonged to this little girl who was at the park with her younger brother (we think) and their two maids. Apparently, this 7 year old girl (if I recall correctly) called Georgia, spends almost everyday at the park. 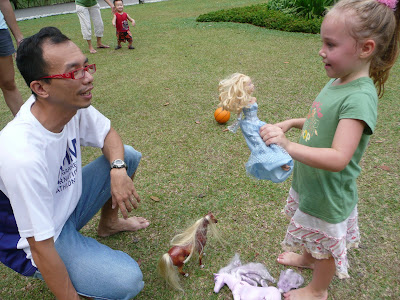 She was very friendly, and wanted to play with Isaac and Carrie, and more importantly, wanted hubbs to play with her. As usual, hubbs is the girl magnet... *sighz* he not only 'auntie-killer' he also 'little girl-killer' hahahaa... 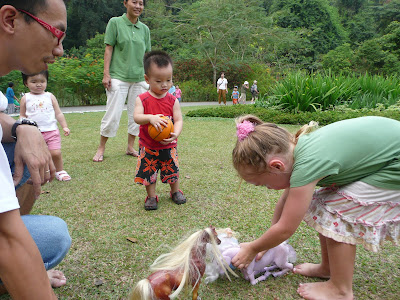 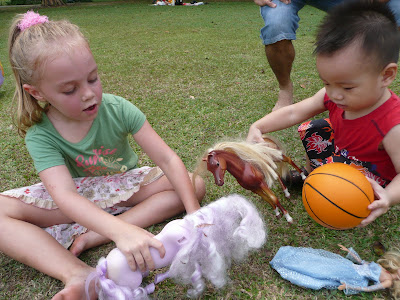 Here's Isaac and Carrie. Carrie's about a month older than Isaac. At this age, they are at the stage where they wouldn't really play 'together' yet - instead, they play 'along-side' each other. 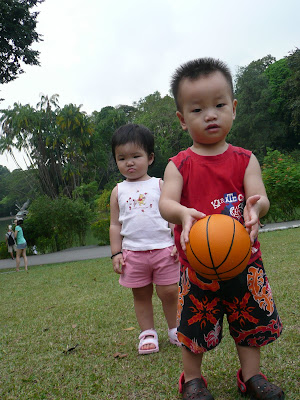 Here's a nice shot I caught of Peishi and lil Carrie :) 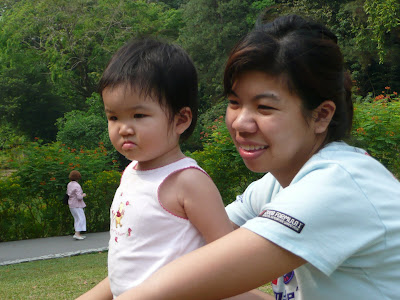 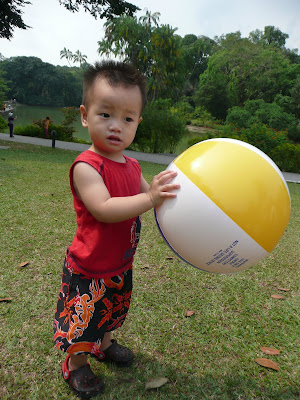 Was really quite a nice morning for the kids to be running around in the park - really thanks to Daph for organising it! 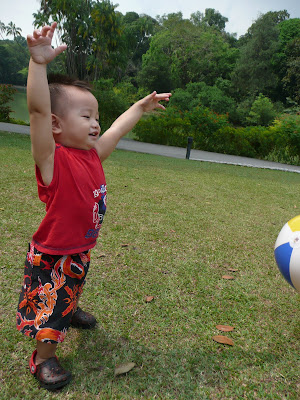 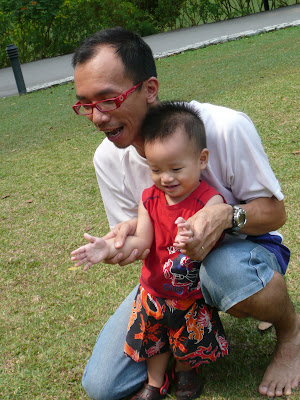 You could tell that Georgia would often approach other park visitors to play with her. She was friendly and at ease with us, and she knew how to play with younger kids like Isaac in the sense that she would know to throw the ball gently, instead of throwing too hard. 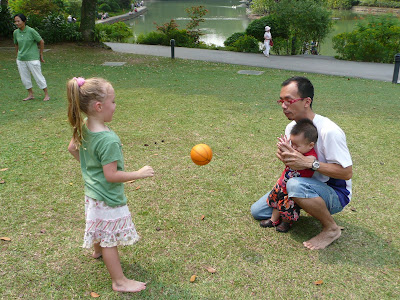 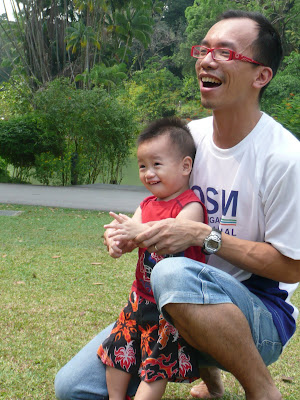 This is Georgia's lil sister. She mustn't have been very much younger than Carrie and Isaac, but here she was running around Botanic Gardens with her diapers on only. Truly, we felt sorry for Georgia and her sister. 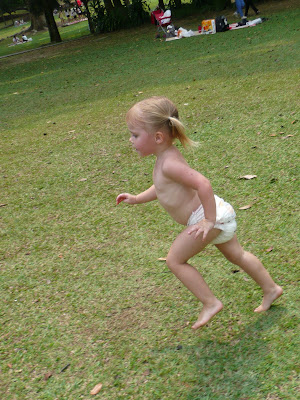 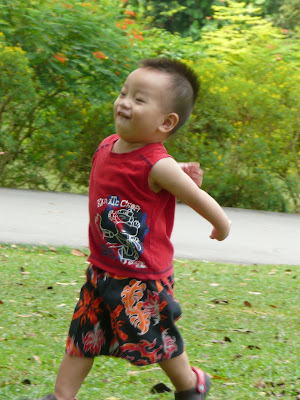 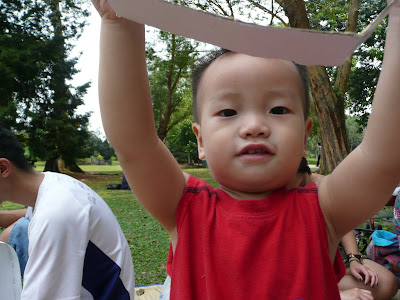 Here's my Isaac, amusing himself with the cardboard game insert. 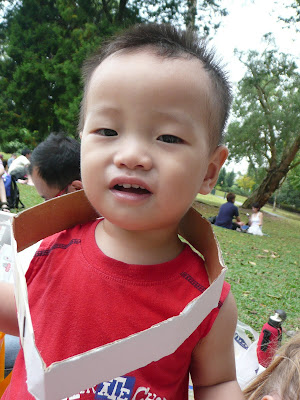 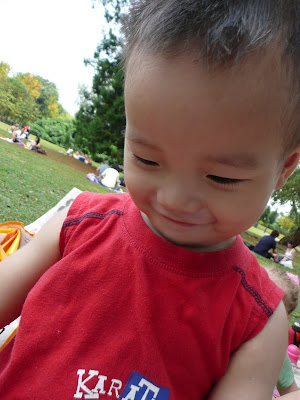 Here's a vid of Isaac chucking away his monster! :)