Well, you know the fanatic chronicler in me. I insist on blogging about the most boring and mundane things. I have a thing to say for anything and everything! hahahhaa... and I want everything recorded and chronicled for fear of faded memories!

So, since I went back to work after 3 months of maternity leave (i.e. Isaac was about 3 months old), all the way till June 2009 (Isaac @ 22 months) - we had the following routine on weekdays.

We would all wake up early in the morning, and send hubbs to school by 7am. There, hubbs would carry Isaac, like below, and talk to him awhile. Point out the birds in the sky to him, and kor kors and cheh chehs to wave Hello to. Occassionally, hubbs colleagues would come by to say Hi and talk to Isaac. 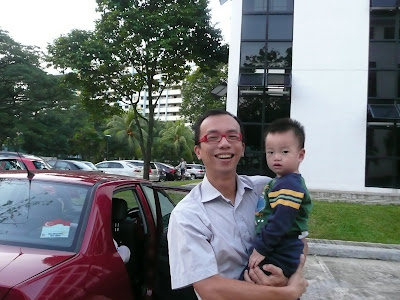 Then I would drive Isaac to my in laws place, leave him there for the day, while I went to work. After work, I would swing by hubbs school to pick him and then we'd go back to my in laws' place to pick Isaac up.

Below is a picture of the seats at the covered walkway just downstairs my in laws place. In the evenings, the grannies and grandpas of the block would gather there to chit chat. Being an old estate, these people have lived there for more than 30 years.

Having lived there since he was born, hubbs knew all these grannies and grandpas and they knew him, coz they'd literally watched him grow up. Thus, they were very warm towards us, and we would always stop to talk to them a little before we headed back home. 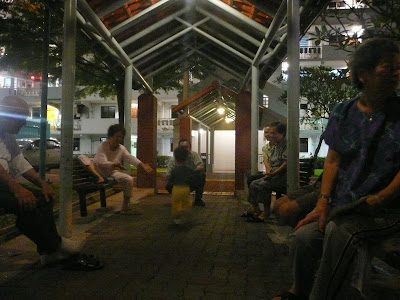 pix taken on 3rd March 2009
Isaac @ three days to 19 months
Actually, it was hubbs who spoke to them, I didn't. Coz they're mostly Hainanese and I don't know how to speak Hainanese! Yeah hubbs knew a little Hainanese - he'd picked it up from them over the years. Just a smattering of it. Plus he 'cheated' a little sometimes - he would use our Teochew words and say it in a Hainanese tune. It seemed to work *shrug* !!! hahaha...

So the old folks eagerly followed our progress over the years... Hubbs showing off his young bride... accepting 'advice' to have kids soon... breaking the good news of our pregnancy to them... showing off my big tummy to them... and finally, Isaac.

Thereafter, I stepped away from the limelight, and Isaac was the star. The covered walkway was his model runway where he strut the strut every night. They loved to see him, and from the time he could walk and talk, he would slap high fives, blow kisses, say and wave goodbyes... I think I can safely declare that he was the highlight of their night, every night.