FAQ: So now you have to buy two of everything?!?!

Yes, a frequently asked question we have been answering since people knew we were pregnant with twins, is: "Now you have to buy 2 of everything!" As you can tell, it usually doesn't get presented to us as a question per se.

It seems like most people just assume that we need to get two of everything. Two baby cots, a double stroller, are the most commonly cited items... 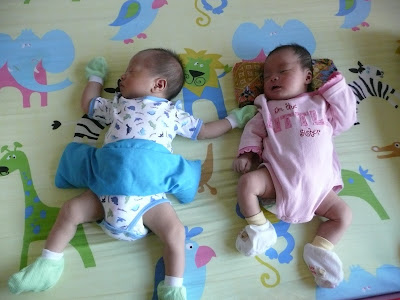 pic above taken on 6th February 2020
Asher & Shawna @ 1 month exactly
Well, the answer is No, actually. We haven't exactly bought anything this time round. that's coz with Isaac, we already collected 2 of everything! Hahaha... I say "collected" coz our family, friends and colleagues were all very nice and passed loads of stuff to us when we were pregnant with Isaac.

Thus, we already had 2 cots, 2 strollers, many types of baby rockers, varied designs of baby carriers, tonnes of clothes for boys... And as you know, my sister has 3 girls, the youngest of whom is the same age as Isaac, thus, girls' clothes for Shawna is not a problem at all... 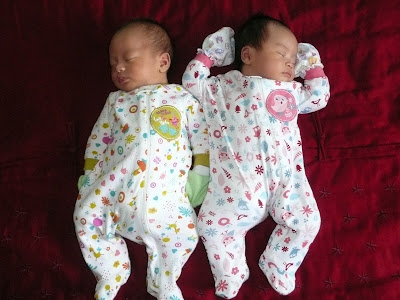 pic above taken on 9th February 2010
Asher & Shawna @ 4 weeks plus
Clothes thanks to Xiuping! They're really cute!!!
It's really been very heartwarming for us, coz even people who are don't know us directly (like relatives of relatives, or friends of colleagues etc) would even pass us stuff for the kidzes. Especially since we got pregnant with twins, people have been offering us stuff all over again, coz they know we would need double of some stuff.

Like carseats! Hahaha... can you imagine how many carseats we would have to have in our car?! (Actually you don't have to imagine if you can count... :p) THREE! Yes, that's right! We have since also picked up a few more strollers - more choice is always good! hahaha...

But yeah, you can imagine how cluttered our place is right now. Just had a gathering at my place recently, and the moment Hweech stepped in, the first thing she said was "Your place is unrecognisable!!!" 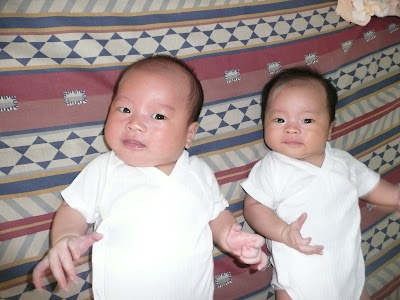 The sleepsuits in the 2nd pic were from Xiuping, and the two white Zara onesies in these two pix are from Helena. Pei Teng also bought the twins matching disney sets that would probaby fit them in only a few months time. 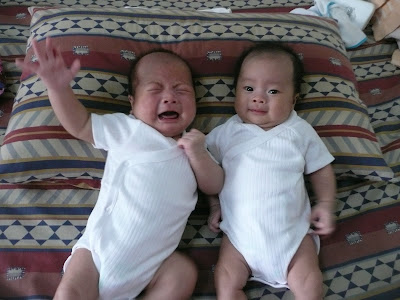 two pix above taken on 22nd February 2010
Asher & Shawna @ two days to 7 weeks
Well, guess the only stuff that we really need double of are... DIAPERS!!! Geez!!! You can't imagine the amount of diapers we go through! It's really amazing! So you see how I really know that they're my kidzes? Coz they're so full of shit - like me! HAHAHHAA...
Posted by Pamela at 11:10