The last time I wrote about how Isaac was reacting to the twins, he was mildly jealous of the babies. Soon after that blog post, the situation degenerated pretty badly. Isaac was increasingly hitting the babies, or he would 'crush' them by leaning his body onto them towards me, when I am carrying/feeding the babies.

I realised that he would hit the babies if and when he is made to wait. For example, if I am feeding a baby, and he wants me to go play with him, or take something for him, or read to him, whatever... and I say "Can you hang on awhile, Isaac? Wait a little while" He'd know it's coz I am feeding the baby, and he would sometimes hit the baby. Sometimes? Yah, depends on his mood. Good mood: "Mummy, I wait awhile. You feeding Asher/Shawna, right?" Bad mood: *smack* quick as Lightning McQueen, faster than you can say "kachow!" 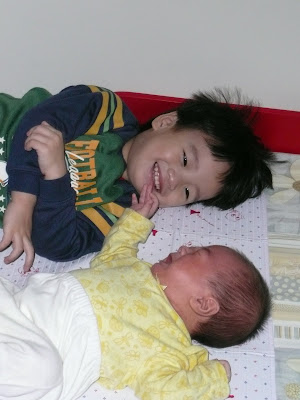 These pix are actually from the anecdote I mentioned in the previous post on this topic - about how Isaac heard Asher crying, and he went to lie down beside Asher, holding his hand to comfort him. So sweet, right? :p Generally Isaac is very sweet with the babies, just that sometimes... his temper gets the better of him. 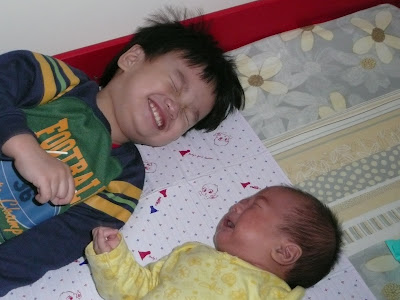 When we decided to start Isaac on childcare, I also thought it'd be good for him as it gets him out of the house most of the day. So he doesn't get to spend as much time with the babies - and thus doesn't see/feel that attention is being robbed from him and given to the babies. I thought this might lend a hand to lessen his bouts of jealousy.

Turns out that I was right. Since Isaac started childcare, he hardly ever hits the babies anymore. Well, yeah there's the occasional smack or two, or he'd use his foot to nudge the babies - we usually stop him before he launches into a full kick :p But yeah generally, number of incidents fall, and severity of incidents also drop. 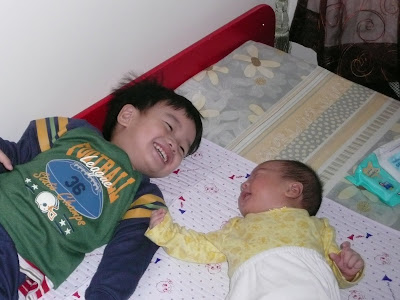 pix taken on 20th February 2010
Isaac @ 2 years 6 months plus
Asher @ 6 weeks
In fact Isaac's picking up very quickly on how we deal with the babies... the other day, when he saw Asher cry, he said "Why Asher? Why you cry? Hungry is it?" He promptly turned to me and said "Mummy! can you please feed Asher? He hungry!" Another time, when Shawna was crying... "Mummy! Shawna is crying! Feed Shawna! She is hungry!"

Geez, he's fallen into the fallacy of thinking that everytime a baby cries - baby's hungry!!! hahaha... well, what do you expect?! He's a first time big brother, you know! :)
Posted by Pamela at 07:23