A year ago, these threads were too long and big for Isaac. Today, they're too short! Haha! But it looks kinda cute on him, still. yah? :) reminds me a bit of like Nezha ;p 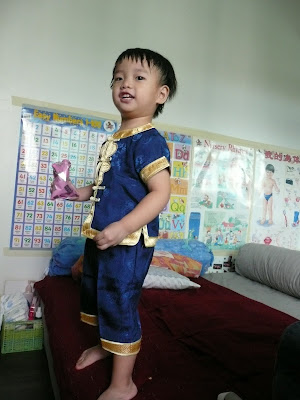 Wanted to update on Isaac and his school (childcare). He's doing fine. Settling in pretty well. Nowadays, he usually doesn't cry when I drop him off at school before I go to work. Unless he's in a cranky mood or something, then he'd be extra clingy to me that day and cry. But even then, the teachers tell me that he usually doesn't cry for long after I leave.

Also, everyday when I come and pick him up from school, he's usually playing and having a fun time. I'd ask him if he'd enjoy his day at school, and he'd always say yes. And when asked if he wanted to go to school the next day again, he'd always say Yes in a very firm and sure voice. Remember I was telling you about the incident that a classmate of his bit Isaac? Well, he remembered it for a long time, and at home, would often point to his chin and say "Chewey bite me." (name changed to... er, protect identity? ;p kekeke the moniker is so appropriate, ain't it? kekeke...) So since he often remembered it, I kinda assumed maybe Isaac wouldn't wanna play with Chewey since Chewey bit him, right?

But one day, when I went to pick Isaac, he was in a particularly good mood that evening. He was playing with his friends, and very cheery when I arrived. After speaking with Teacher Foong Ling for awhile, I said to Isaac "Okay, come let's go."

"Okay!" he said "oh, wait! Let me say 'Bye' to Chewey first." then he ran into the music room to look for Chewey to say bye to him. This reminded me of something I wanted to ask the teacher. "Oh so Isaac plays with Chewey now?" I asked Teacher Foong Ling. "Yes" she said "He plays with all his friends." 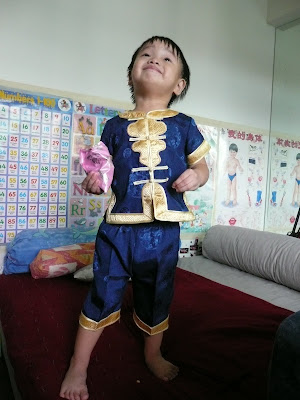 pix taken on 17th February 2010
Isaac @ 2 years 6 months plus
Now this was news to me as hubbs had often told me that at Isaac's previous school (the 2 hour, Monday to Friday one), Isaac was apparently pretty aloof and wouldn't play with the other kids, but he'd consent to play alongside them. I said so as much to Teacher FL.

She gave me this "Huh? sure or not!?" look and said "No, no, he plays with ALL his friends." I must have had doubt written all over my face, coz she added "Everyday, he'd even choose who he wanted to hold hands with that day."

"Really?!" I exclaimed, laughing. I could imagine Isaac doing just that. Yet, I couldn't quite imagine it - coz I'd never seen him doing that before. At that moment, I felt this stab of envy in my heart, that the teachers in school could spend more time with my son in a day, than I could. That they could see him growing up in a way that I couldn't. That they could witness all the cute cute things he does and says! sighz!

But I know it can't be helped. Well, which is why I enjoy picking Isaac up from school. I enjoy lingering around to see his friends, looking at the artwork he'd done that day, and mostly, talking to his teachers... just so that I get to know of little nuggets of info like this. Isaac has yet to reach the stage where he can tell me about his day at school. Thus, any info that I get would have to come from the teachers.

I was so tempted to tell Teacher FL, to ask her if she could do me a favour, and write down in the communication booklet whenever Isaac did or said something cute, to describe it and record it. But I didn't. I couldn't - she'd be so busy! My son so cute, you know!!! ;p Though seriously, I know it wasn't something that I could reasonably ask of the teachers to do, so I didn't say it... I guess I was just glad she was even sharing this info with me.

So, everyday, I'd just linger awhile, talk to the teachers... and try to find out more about Isaac's behaviour and quirks. I'd try my best to remember everything little incident the teachers tell me about Isaac, and I'd go back and tell them to hubbs. He loves hearing these little stories about Isaac too. So... you know the Chronic Chronicler (just came up with that! woohoo!) in me - you'd get to read as much as I can remember to blog about :)

Oh, another thing I wanted to say about this... I was surprised that Isaac bore no grudges nor resentment against Chewey. After all, Chewey did bite him pretty hard (now, approx 3 weeks after the incident, the wound is still healing and visible), and Isaac obviously remembers this incident coz he often points at his chin and says "Chewey bite me." or "My owwie".

So I'd have thought that he would not want to play with Chewey, right? Which is common and normal behaviour after someone tries to take a chunk out of you. But no, my darling Isaac apparently bears no such grudges nor resentment against the chewing one ;p

My first thought was:"Wow! My Isaac is so forgiving! Good boy!" Then as I thought about it more... I had another theory. Maybe Isaac simply did not know how to bear a grudge, he didn't know what resentment was. Perhaps bearing grudges is a learned behaviour.

As I thought about it more, I am quite certain that that's it. It was a learned behaviour. And, it is something we shouldn't learn! But inevitably, in life, one often learns to bear grudges, or be resentful about something. Or for self-preservation, we learn to distance ourselves from things/people that hurt us...

But it is another important learned behaviour that we should learn - to forgive! :) So... it's not that I bore any grudges nor resentment against Chewey for biting Isaac... but I certainly forgive him now :) for this is the important lesson that these two lovely little boys have taught us!
Posted by Pamela at 23:59