We had tix to the Bear & Chicken Go to School show by Singapore Repertory Theatre, thanks to Pei Teng, who managed to ballot for the free tix from office, but couldn't make it for the show. But we only had 4 tickets - which meant we could only bring one of the girls for the show. 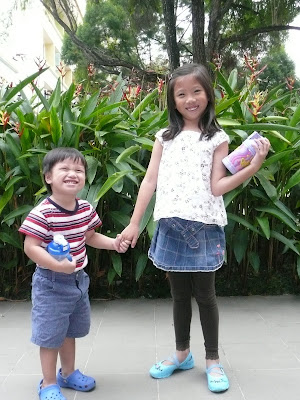 We wanted to bring Natalie for the show - but then my sis said Natalie might not want to follow us as she is very attached to my sister and would want her around. Isabelle had watched the show with her school already. So Becca was to come with us. Look how much Becca has grown huh - especially if you compare to the pix that were taken of her on my wedding day. Kids grow up so fast! She turns 7 this year and is in Primary 1.

What a pleasure it was to have Becca out with us. She was very well behaved and did not throw any tantrums at all. Listened to all our instructions and set a fantastic example for Isaac, too. Isaac had a fantastic time on this day out with Rebecca cheh cheh. He was so pleased to have her around. He'd insist on sitting next to her in the car, and wanted to hold hands with her all the time. The day after this outing, he asked if we could go fetch her again that day so that she'd go out with us! :) 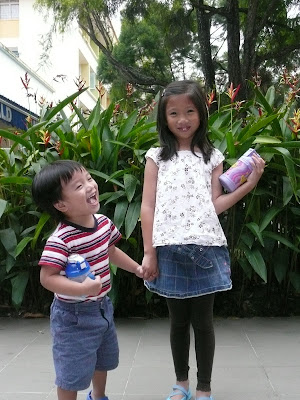 After the show, we proceeded for lunch. hubbs asked Becca what she would like to eat, and much to his chagrin, she replied "Pizza!" hahahaha... hubbs is a very chinese food person, while I am the one hankering for 'ang mo' food. Isaac has always been a rice and porridge boy, till recent months when he discovered pizza (thanks to me) and spaghetti (thanks to his school. THANK YOU SCHOOL hahahhaa). hubbs was outta luck - he was outnumbered. Had it been Isabelle who was with us, hubbs'd have a fighting chance - Isabelle apparently prefers chinese food too. 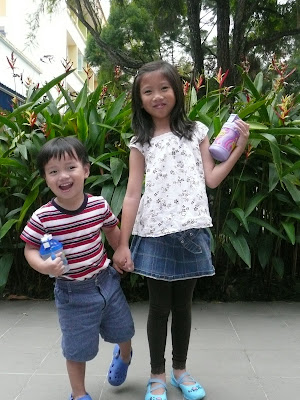 pix taken on 7th March 2010
Isaac @ 2 years 7 months and a day old
Rebecca @ 6 and a half years old
However, this is not to be chinese food day. It's pizza day for Becca, Isaac and I. kekeke... We went to our favourite pizza place Rocky's Pizza at Sunset Way. hubbs and I discussed and we ordered one XL pizza - the 16 inch pizza. We figured that it'd be enough for two adults and two kids.

Gosh! we were wrong! Becca managed to polish off two slices on her own, and so did Isaac!!! Yes, he's a big eater that boy. Especially when it came to foods he likes... and it was on this very day that when the pizza came, he turned, looked at hubbs and I and proclaimed "This is my favourite food!"

Wow! hahahaha... we didn't even know he knew the meaning of the word "favourite"! Must be something he learnt in school! (we figured everything we didn't teach him - but he knows - must be learnt by him in school!) It was hilarious - we all burst out laughing.

So he knew the meaning of the word "favourite". I'd wondered how the teachers taught it. It's not an easy word to learn the meaning of. How do you explain to a 2 and a half year old that you can like one thing more so than the other, and one thing best? Perhaps they taught by giving examples? "This is my favourite colour, what is yours?" *shrug*

Soon, I found out that Isaac didn't exactly know what "favourite" meant - he understood it to mean favoured/more but not favourite/best. I knew this when the following week, he was enjoying a plate of spaghetti, and he declared loudly "This is my favourite food!" :p Since you technically can't have more than one favourite (in the true sense of the word) - he must mean that "I like to eat pizza very very much." and "I like to eat spaghetti very very much too."

Well, close enough. I think. At least he understands that the word is used to indicate his preference. Good enough! :)
Posted by Pamela at 13:34