Yes, my Isaac is sick! :( I was in a meeting yesterday afternoon when the school/childcare called to say that he is listless and feverish, about 37.4 degrees. Luckily I took the call... I have the school's number saved in my phone, you see... so when I saw it was a call from the school, I thought:"Better answer. They don't usually call for trivial matters." 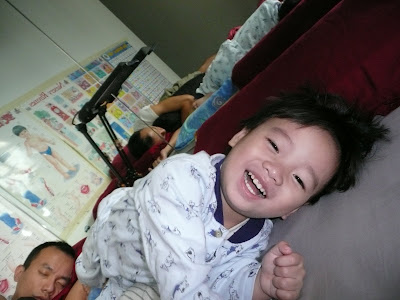 Teacher Lina called, said that Isaac was listless after his nap and didn't want to go to the playground and play; took his temperature and it was 37.4 degrees. Something like that. Some times when you hear disturbing news, you can't remember the exact content. Just roughly roughly.

I was disturbed coz I was stuck in a meeting, and had another at 5pm - when I'd rather run to school to see Isaac. hummphh. Plus hubbs had the car. hummphh. plus MY BABY's SICK?!?! sob sob.

Also, there was no reason for Isaac to be sick :( I mean, it's not like he was caught in the rain, or slept without clothes on, or went without his dinner last night... hubbs had the same reaction as me - he was like "Huh? sick? How come ah?" - which were my first questions as well. Oh yah, we react like that coz... Isaac is seldom sick. Well, seldom sick without reason... 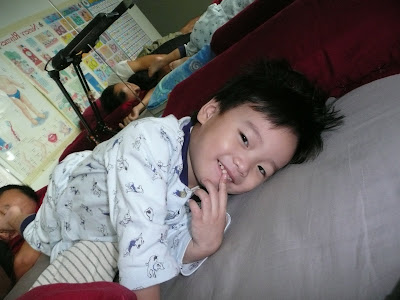 Well luckily hubbs could go pick him up immediately... He then brought Isaac to see our family doctor, who gave him a generous prescription of fever medicine (more generous than the pd usually does...) and an antibiotic too. hubbs was like "huh, isn't he too young for antibiotics?" Which the doctor replied "Rubbish! No such thing lah!"Well, okay, if that's what you say... We weren't inclined to disagree with him - coz he's my Duah Pek. So typical of him. hahaha... 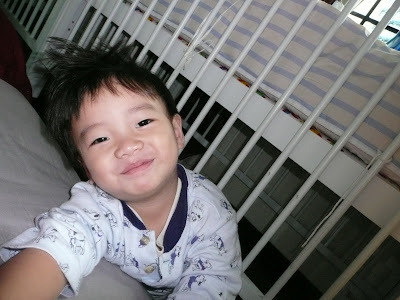 It was about 6pm, so hubbs thought they could come pick me up since my official knock off time was 5.45pm. So they came round to my office. But guess what, I was still in the meeting! It went on and on, round and round. So frustrating! And then suddenly hubbs called me on my mobile - Isaac puked in my office recept! :( oh dear.

I dashed out to the recept to find a huge pool of vomit at the recept area, hubbs with a huge patch of vomit on his pants, and Isaac, stripped down to his diapers only. The poor thing. He's very particular and hates to be in his clothes even for a moment longer if they have vomit on them. He'd request to change out of them immediately. Well, who wouldn't, yah?

But bad mummy here couldn't leave yet. Coz I was taking minutes and was sorta coordinating this meeting. Damn, if I wasn't taking minutes, I think I'd have dropped and go. SIGH. I could only point them in the direction of the toilet... and took off my jacket for Isaac to wear. 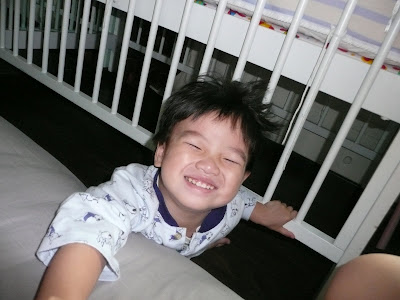 Meeting went on insufferably long till it was almost 7 by the time we were done. I quickly ran, got my stuff, and went to meet hubbs and Isaac at the car. Poor Isaac was quiet and listless all the way home. He even fell asleep halfway home, whilst munching on a biscuit.

When he got home, he laid down on the playmat and didn't utter a word. He was so quiet, it was painful to see him like that. Yet when I ask him "Isaac, are you okay?" He'd look me in the eye, nod, and say "Yes." 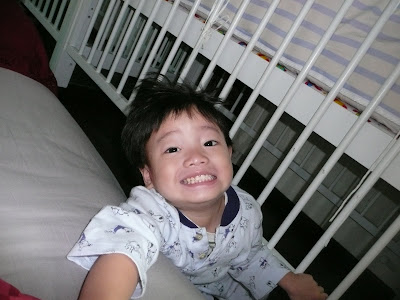 pix above taken on 5th March 2010
Isaac @ a day to 2 years 7 months
He managed to eat half a bowl of porridge for dinner, and we then got him to bed early. We tried to use a wet towel to 'sponge' his forehead, but he didn't like it. Kept swatting our hands away or moving his head away from us. He didn't seem to mind if I just wet my hands and put it on his forehead - so I just did that for the whole night.

At one point, hubbs felt his head, which didn't seem that hot at that point in time (due to my constantly wetting his forehead) and took his temperature - 38.2! Gosh! And that's after all the 'wetting' I've been doing?! Isaac's never had a temperature this high before :(

Isaac was in pretty good spirits though. Considering. The down end, he'd be quiet. The uppity end, which happened intermittently throughout the night, he'd be cheery and he'd sing and talk to us cheerfully. So cheerfully that hubbs and I would look at each other and give each other an incredulous look.