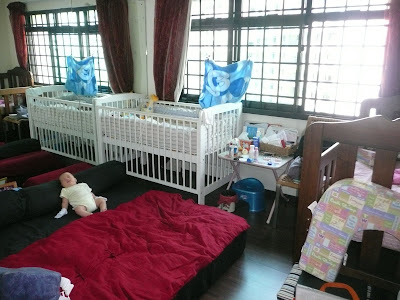 Yep, this is it. Our current room layout. Luckily our master bedroom's pretty big. After the confinement nanny left, we rearranged the room and managed to fit in both cots, in addition to our King sized bed.

You know how hospitals have the nurses' station in a ward? Well, I have a mini nursing station between my two cots. This is where I sit on the edge of the bed, and feed the babies. I have on the table everything I need - the hand pump (to pump the other breast), bottle of water (breastfeeding is thirsty business), tissue paper (messy business too), vitamins (must maintain my milk to be chockful of goodness), nailclippers (I usually cut the babies' nails when I am feeding them) etc...

I have a chair there, but I sit on the edge of the bed more often than I do on the chair. Primarily coz it's a kind of a squeeze to sit on the chair... The babies are growing longer (taller) by the day and so if I am sitting on the chair to feed them, once they kick, they will hit the cot. Quite difficult to manage, so I usually sit on the bed.

Bad thing about sitting on the bed is that my back has no support, and also, it's quite a strain for me to stand up and down carrying the babies who are getting heavier by the day. As a result, my knees have been having it very bad, and are now constantly screaming in pain :( I have problem coming down stairs now, and squatting is a big issue.

Everyday I go toilet and thank technology advancement that we no longer really use squat toilets now ;p Only thing that bothers me, is that it hurts when I have to squat to get down to Isaac's level to talk to him. So at home, I simply end up sitting on the floor. But it'd be so wierd if I just sat on the floor everytime I want to talk to Isaac when I'm at his school. Thankfully, they've many mini chairs about, which I'd quickly drag one to sit on, whenever I need to get down to his level to talk to him in school.

Speaking of physical pain... my ankles were hurting too, did I mention? Thanks to my flatter than pancakes flat footed feet (is there even such a term?!) The pain got very bad after spending 12 weeks of maternity leave at home walking about without footwear - no support = pain. Now, back at work for more than a month already, wearing my trusty boots and $300 pair of customised orthopaedic insoles - my ankles are much much better and my feet no longer feel like they're dropping off anytime soon. Best investment I ever made buying that pair of insoles. Should have bought it when I was a teenager or something.

Did I tell you about my wrists? Yeah pain also. Beginning to sound like an old woman, right? Pain pain pain. Not so strong as before, and there's a cracking sound, and sometimes the wrist gets stuck in a certain angle and must be 'clucked back'. Dunno how to say lah. Don't know how it came about either. Maybe it was all that rough play with Isaac. Dunno. But now, if I hold the babies too long in one position with my hands, the wrists would act up.

Pain pain pain. Sigh. Feel like my body's falling apart sometimes. See what pregnancy does to you. Labour pain is nothing man - at least you can take an epidural for that. It's the after-pains that kill you. Oh yeah and for awhile, when I breastfed, the womb would contract you see (due to breastfeeding) - the PAIN of the contraction is the same as labour pain contraction lor - faint - without the epidural, mind you. And without the gradual increment of pain so that it's easier to withstand. No no, this one just hits you. PAINPAINPAIN.

Okay, enough of my pain. Dunno how this post about the room layout became a post on pain ;p Here's a look at one of my JOYs!!! :) So cute and tiny on the bed, isn't he. Ahhh... with kids like that, a bit of pain nevermind lah :) 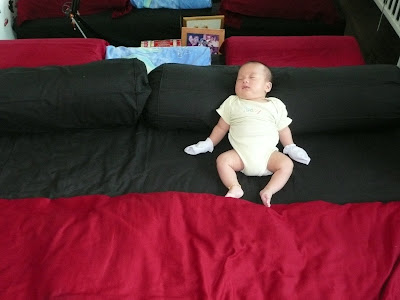