Yeah Shawna flipped! She did! On Sunday- 2nd May 2010 - so that makes her 16 and a half weeks when she flipped. She did completely turn over, though she hasn't managed to get her arm out from under herself. Think she'd be able to do that by this week. 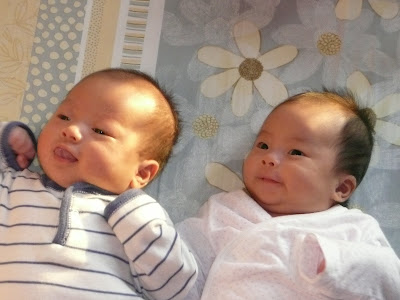 Asher is able to half turn already, but not completely turn over yet. We figured that he's heavier than Shawna, so inertia is greater *snigger*snigger*... maybe his diapers too heavy, take it off and maybe he can flip kekekeke... 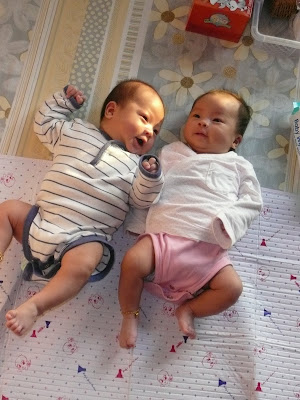 But then again Isaac was heavier than Asher is, and Isaac flipped at 14 weeks! So... no excuse leh ;p But Isaac was always a quick one developmentally, and everyone's unique, so shouldn't compare, yah? :) 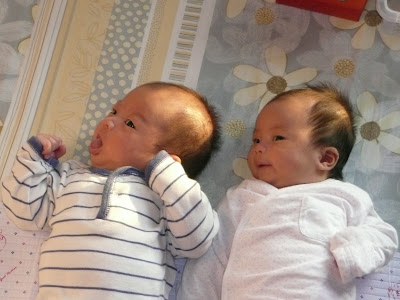 Growing up, I always remind myself that next time when I have kids, I will not compare them and unwittingly pit themselves against each other and promote sibling rivalry. But as time passes, and now that I am a parent of more than 1 kid... I can see that it's inevitable that comparisons be drawn... But I find it's more like comparing case notes, ya know?

But then again, I may speak too soon. My sister was just telling me how she sometimes compare the girls and use them to urge each other on - despite having the same thoughts as me that we should not compare the kids and encourage sibling rivalry. (Haha, see how scarred for life we are!?) 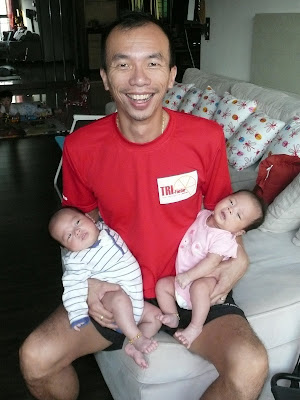 pictures taken on 28th February 2010
asher & shawna @ 7 and a half weeks
See that's hubbs and his dual baby holding pose, which he can sustain standing up, even! He's very good and can do that pretty well, coz his arms are long and strong. I can't do that pose, coz hmmm... maybe my arms not long enough - babies too big for me to do that already. Plus my wrists are like kinda loose and hence kinda weak, so not very strong... a bit tough to do that pose. Sitting down with the weight of the babies on my lap, can... but not standing.

Oh, but I can do both babies over my shoulder though. kekeke... show off show off, one day when I carry like that must get hubbs to take a picture... kekeke... over shoulder easier for me coz the weight is on my body rather than solely on my arms.