These pix were taken one of the mornings when we were getting to the car to leave home for Isaac's school and work. If we happen to park in a certain part of the carpark lot on the ground floor, Isaac would want to walk on the ledge (? whadya call that?) balancing his way. 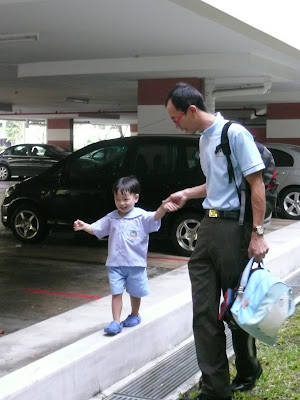 Isaac has always been quite physically inclined. He met his physically milestones early - stuff like, flipping over when he was a baby, starting to crawl early, and walk early too. He likes to play rough with hubbs, and literally uses hubbs as his personal gym & playground equipment by climbing all over hubbs and balancing on his shoulders or 'walking' up hubbs' leg etc... 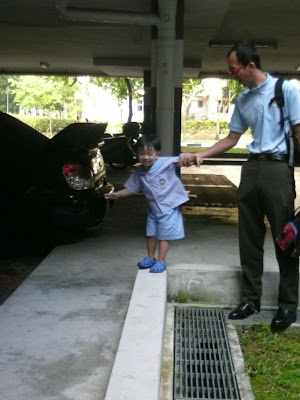 So when I heard that they have extra classes in school that we could sign him up for and one of them was "gym class" - I knew Isaac would love it. So I signed him up for it, thinking that he would enjoy it from Day 1.

Alas, it was not to be! The very first day of gym class, I checked with Teacher Foong Ling if Isaac enjoyed gym class. She instinctively nodded, but paused awhile, and said "But he cried." Apparently, Isaac had some kind of separation anxiety - he didn't want to be separated from the teachers he was familiar with - Teacher Foong Ling and Teacher Lina - to go to Gym Class who was conducted by external instructors. 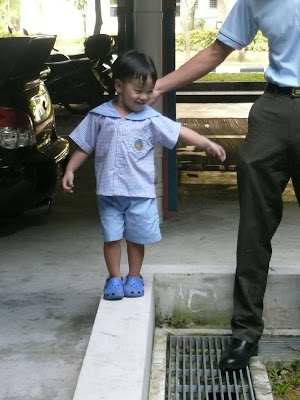 That first lesson, it took him very long to get acclimatised to the gym class teachers and only towards the end of the class was he more relaxed and enjoying himself. He also tried to make excuses to leave the lesson to go out to look for his teachers FL & L - by giving the excuse that he needed to go to the toilet.

By the end of that Thursday, when I picked him up, he was pretty traumatised from being forced to attend gym class that he repeated kept telling me that he didn't want to go gym class. The next day on Friday, and over the weekend, he continually kept repeating "I don't wanna go gym class." 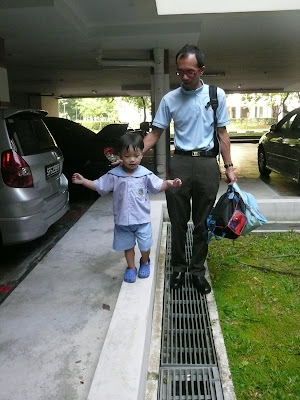 He was so traumatised that, come Monday, he said he didn't want to go to school. I thought it was odd of him to say that coz he enjoys school. So I asked him...

Me: Why don't you want to go school?
Isaac: Don't want.
Me: Why?
Isaac: Don't want school.
Me: Oh. (then I kept quiet. after awhile...)
Isaac: Mummy, today no gym class. No gym class, right?
Me: Oh... no, no, today no gym class.
Isaac nods.
Me: Is that why you don't want to go school?
No answer.
Me: You want gym class?
Isaac: No! No!!! No gym class!
Me: It's okay, today don't have. (pause) Why don't you like gym class?
Isaac doesn't answer.
Me: Is it coz... Teacher Foong Ling and Teacher Lina are not there?
Isaac looks at me, and nods.
Me: Oh... I see... But you know that Teacher Foong Ling and Teacher Lina are just outside, right? They're right there.
Isaac just looks at me, and keeps quiet. Looking a bit sad and anxious.
Me: They're right outside. They're waiting for you to finish gym class. You don't have to be scared, they're right there. (Richard Marx 'Right There Waiting' playing in the background... kidding! :p) 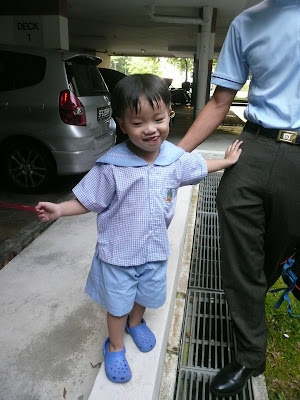 pix above taken on 25th March 2010
Isaac @ 2 years 7 months plus
The next day, I quickly pre-empted Teacher FL, telling her that they better start psychoing Isaac to prepare him for gym class that coming Thursday. "Psychoing" meaning to keep telling Isaac about it, to prepare him mentally by talking him through it. I have found this method of communicating with Isaac to be very useful and effective. Perhaps it's coz I have been doing this with Isaac since young.

I don't know whether they did it in school. But at home, we started psychoing him. We'd constantly mention gym class, and talk to him about it. At the start, he used to get all worked up when the words "gym class" was mentioned. But I kept telling him that his favourite two teachers were just outside waiting for him, and that gym class is fun etc.

As the weeks pass, Isaac grew to like gym class. I suppose he got used to the gym class teachers, and he realised that teachers FL & L were really just outside, and most of all, he enjoyed what they did in class. Probably. I'm just guessing, but I think I'm probably right on most counts. But what matters is, he was no longer 'afraid' of gym class.

On Thursdays, I'd ask him if he enjoyed gym class that day, he'd say Yes! On days I forget to ask, he'd tell me "Mummy, today got gym class." Last week, when he told me that...
Me: Oh yeah... was gym class fun?
Isaac: Yes!
Me: You enjoyed it?
Isaac nods: Yes, enjoyed it.
Me: What did you do in gym class today?
Isaac pauses: Aeroplane!
Me: huh? oh! you pretended to be an aeroplane?
Isaac: Yeah!

Isaac has not learnt to describe his day to me yet. But he's slowly learning to do so. By "aeroplane" I think they were probably learning in gym class to balance on beams, and spreading their arms out (like an aeroplane) to balance themselves.

Just yesterday, Isaac saw Shawna rolling on the mattress and said "Look, Mummy! Shawna is rolling like a sausage!" :) So, I know, in gym class, my Isaac learns to roll like a sausage.

Now, Isaac looks forward to gym class, just as he enjoys school. Well done, everyone! :)
Posted by Pamela at 21:15