Say you, say me. Say it forever. Naturally. See my sweet Shawna. She's got this very sweet look. Even after we cut them both botak in their 4th month, it was still easy to tell the twins apart, coz Shawna had this sweet girly look, whereas Asher had this boyish look. 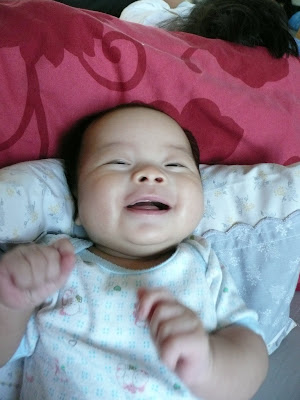 See, now that Shawna's drinking more, she's starting to have these chubby cheeks. Lately, people have been pointing out her double chin too. hehehe... that's fine for now. But I hope she slims down next time ;p Haven't you seen those research reports that shows that there's a strong correlation between fat babies and obese adults?! horrors! And I was a fat baby! *sob*sob* My mother says that as a baby, all I did was eat sleep eat sleep eat sleep. SIGH. what bliss. 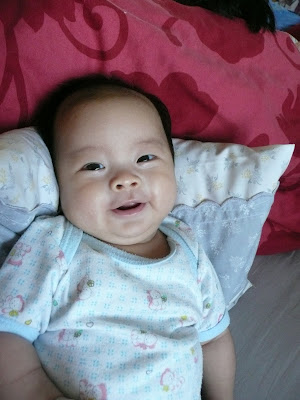 For some reason, the babies love the mattress. They would be very happy lying on it. Flipping around on it. Oh yes! Forgot to update. Soon after Shawna flipped, Asher did too. Like within the week. Then, at 19 weeks, Asher was the first to "flip back" - from face down to face up. Then Shawna did too, shortly after. 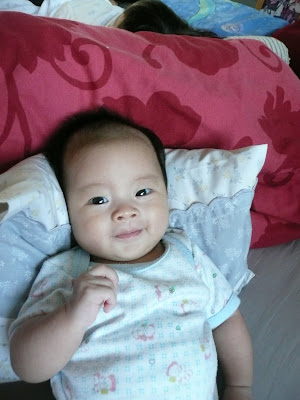 Pretty often, I catch Asher putting Shawna's hand in his mouth. Or he'd be chewing on her shirt. Doesn't bother Shawna. Sometimes she chews on Asher's hand too. Hmmm... wonder if they'd still 'not mind' when they start having teeth. hahaha... 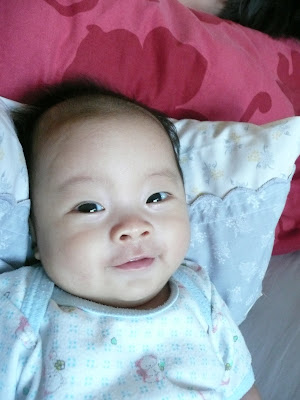 Isaac loves to lie down on the mattress next to the babies. We'd go like "Isaac! Be careful! What are you doing?!" And he'd go "I want to lie down beside Shawna/Asher." "Oh... okay okay be careful!!!" But there he goes, he'd like, lie down beside them. And he's happy. For like 3 seconds. Then he starts. 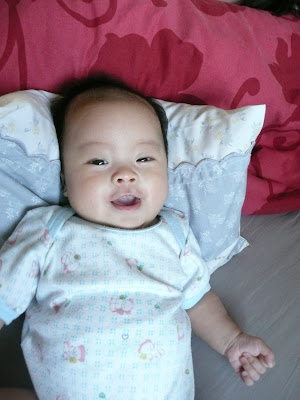 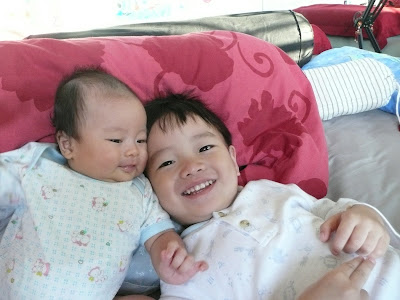 Isaac: Mummy, Asher catch my hand!
Me: He's just holding your hand, he didn't "catch" your hand.
Isaac: I don't want Asher to hold my hand!
Me: Why? He's just being friendly. He likes you.
Isaac: No, he's not friendly. He catch my hand!
Me: He likes you, you're his big kor kor. He's just being friendly.
Isaac: No, can you say him, Mummy. Say him.
Me: *sigh* (stern voice) Asher, can you don't hold kor kor's hand. He don't like it. Oh and don't catch him too. He dun like. Happy? (looking at Isaac)
Isaac: (nods enthusiastically, bright eyed and pleased) Yes! Yes! 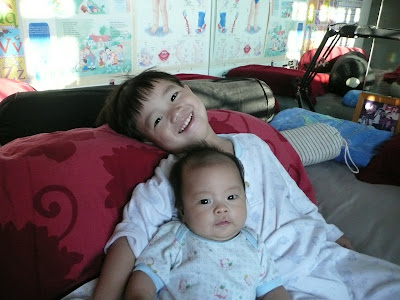 This morning, Isaac initially laid down between the babies. Then he shifted himself, and placed himself just below both Asher & Shawna's feet!
Isaac: Mummy, Shawna kick me.
Me: She didn't do it on purpose.
Isaac: Can you say her?
Me: I will say her, but you know, she didn't do it on purpose.
Isaac: Say her.
Me: (stern voice) Shawna, can you please don't kick kor kor. But Isaac, why don't you move away? You move away then Shawna won't kick you.
Isaac: Mummy, Asher kick me!
Me: I told you if you move away, then neither of them will kick you!
Isaac: He kick me!
Me: Yes, of course he kick you, you're at his feet! Quick move away, then he won't kick you!
Isaac: Say him, Mummy, tell Asher don't kick me!
Me: Isaac. Can you move away? They are just babies, they cannot control their feet.
Isaac: Can control!
Me: Cannot!
Isaac: Can!
Me: Move away!
Isaac: Say him! Say him, Mummy!
Me: *sigh* Asher! (stern voice) Please don't kick your silly kor kor who chooses to lie down at your feet! 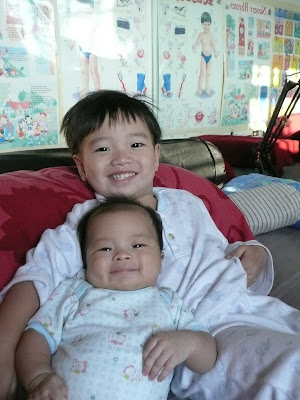 pix taken on 15th March 2010
Isaac @ 2 years 7 months plus
Shawna @ 2 months plus
Me: Okay okay quick get up. Go eat your porridge. We're late already.
Isaac: Not late!
Me: Yes late! At the rate you're going! Quick, come on!
Isaac: No. I want to lie down with Asher & Shawna.
Me: Then stop complaining that they touch you. You lie down next to them, of course they'd touch you. Quick go, you're making me late!
Isaac: Not late!
Me: Yes late.
Isaac: Mummy! Asher pull my long sleeve shirt!
Me: uurrghhh!!! *pulling*hair*
Isaac: Mummy, can you tell him not to pull my long sleeve shirt."
Me: very late already, Isaac, let's go!
Isaac: Mummy, Shawna pull my hand!
Me: Papa!!! Isaac is making me late! Can you say him!!!
Isaac: Mummy can you say Shawna?
Me: Papa!!! Can you tell Isaac not to make me late, please?
Isaac: Not late!
Me: Papa, can you say Isaac?!
Isaac: Don't say me!
Me: Say! Say! Papa, say him!
Papa: ?!?! Isaac...
Posted by Pamela at 01:23