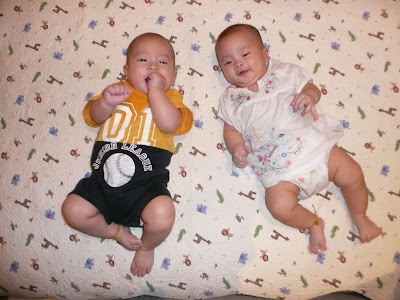 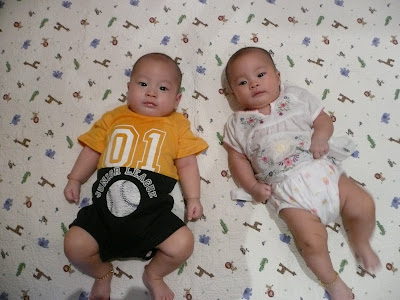 Thankfully, we are all now much better. The twins are now breathing fine. They just both have some remnants in the form of a bad cough. Isaac is almost completely ok. I just have a slight sore throat left. Only hubbs still feels a little out of sorts - but even then, he's waaaay better than a week or two ago. Thanks everyone, for your concern! :) 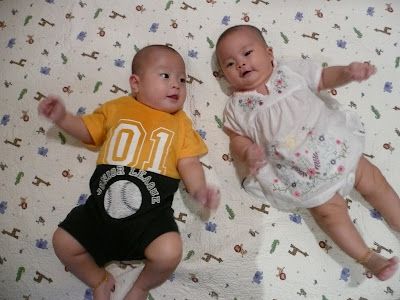 So, recently, in this past week that we're recovering from the virus attack... we realised that Shawna has achieved two milestones! Firstly, she can sit on her own! :) She can actually sit on her own, without any back support or us holding her, for quite awhile - say at least 5 whole minutes, before toppling over. 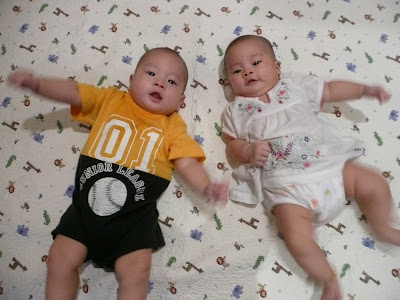 Second milestone is... her teeth have erupted!!! Well, actually, I haven't seen them. But I have certainly FELT them!!! ;p Both Asher & Shawna enjoy chewing on my finger-knuckles - so recently, I have felt the sharp teeth of Shawna! :) 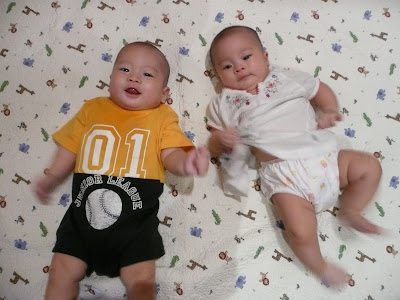 pix taken on 8th May 2010
Asher & Shawna @ 4 months & two days
What about Asher? He can't sit on his own yet, and I haven't felt his teeth break surface yet. But I'm sure it'd happen in the next few days. So far, they have both been reaching most milestones within days of each other :)
Posted by Pamela at 01:23