One up you uh! 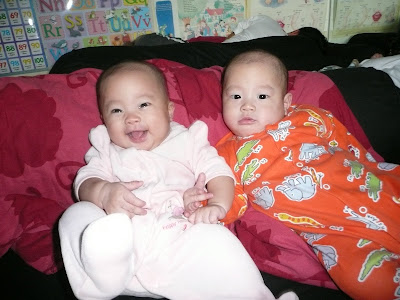 We have more milestones to report! Asher at 6 months and a week plus old, can start crawling already. hehehe... actually, even during the week that he was sick, when he was better and out of hospital, we could see that he was starting to crawl already. 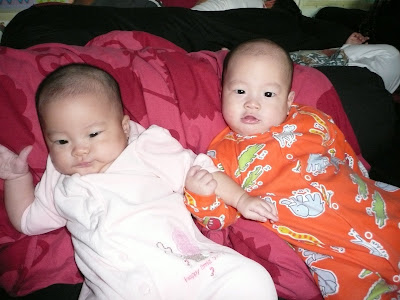 pix above taken on 15th May 2010
Asher & Shawna @ 4 months plus
But now, he's really starting to crawl. He can leopard-crawl style pull himself forward while at the same time use his legs to propel himself forward as well. Just slightly. Shawna hasn't begun in this aspect yet. But both of them are very proficient in moving about - by way of flipping and turning and flipping and turning. They're really amazing in how they can move themselves all over the place like that. 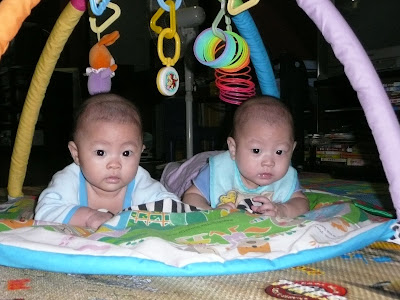 When I was telling my mum recently about these milestones - Asher crawling while Shawna has been sitting up and her teeth emerging first - she commented "Wah, they trying to one up each other huh! Very smart, they champion different areas!"

I instinctively got a bit irritated - it's my recent (well, the past 6 months that is) pet peeve that I hate it when other people (as in everyone else but me and hubbs ;p) compare Asher's against Shawna's milestones. 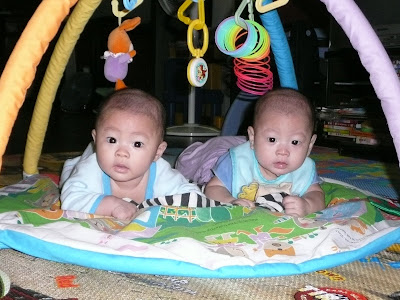 pix above taken on 19th May 2010
Asher & Shawna @ 4 months plus
I mean, sure, it's very natural to compare. To see who's done what first? Who's heavier than who? Who's taller than who? Who has more hair? It's endless. Cousins or kids of friends born in the same year inadvertently get compared to one another, what more TWINS, right?

So yes, I think it's unavoidable that they'd be compared against each other. That's normal. What I don't like, is when it is implied that one is worse off than the other, or one is not as good, etc. Ya know, comments like "Wah, this one is the winner! That one no good."

To me, they're just different, that's all. As different as you are compared to me. We're all unique. We all each have our own speed of learning and growing. But that's not to say we're not normal.

Frankly, when the babies were first born, we - inexperienced in having two babies at one time - were also constantly comparing them against one another - mainly in milk consumption and weight gain, actually. Coz Shawna was drinking lesser than Asher, and consequently weighed lighter as well.

It was the paediatricians that kept reminding us: "They are both growing well and in the normal weight range for babies their age. It's only because Shawna is being compared against Asher, that she seems lighter and smaller. But actually, if Shawna had been brought in (to see the doctor) on her own, she would be considered perfectly normal weight for a baby girl."

I constantly have to remind myself of that - that we're very blessed that both Asher & Shawna are developing well and good and in the normal range for all milestones as can be compared to singletons.

So, anyway, coming back to my mum's comment, about how they seem to be "one-upping" each other... well, that just goes to show that my point!!! They're both doing well, with each doing slightly better in different areas :) hahahhaa...

My clever boy and clever girl lah :) Good babies! So blessed we are!
Posted by Pamela at 13:23