We saw that he had a mouth ulcer on Wednesday morning, and so we didn't bring him in to school. The ulcer was on the side of his tongue - near the canines, so it was possible that he bit himself - that's what we were hoping - rather than it being HFMD.

Brought him to my parents' place where my mum helped take care of him for the day. I didn't want to leave him at home - just in case it really was HFMD. On Wednesday, he developed fever, but his hands and feet were clear of spots.

But on Thursday morning, when I inspected his hands and feet, I could see some small spots already. Heart sink. Sighz. Hubbs brought him to the doctor who confirmed that it was HFMD. The ulcer on Isaac's tongue has also grown a lot bigger. We didn't spot any other ulcers though.

I was very paranoid about him passing it to the twins. And so I told hubbs that it was best he and Isaac stayed over at my parents place for a few nights. Isaac cried last night, wanting to go home. And he did so just now as well. Am now at my parents' place, accompanying my darling Isaac. Later at night, I'd go home to my other two darlings.

Isaac's been a good boy, he cries in between mouthfuls of food, but at least he eats. He cries out now and then to say that his mouth hurts. He allows us to put the medicine on his ulcer even though he knows it will sting for awhile. Just now, he was so pleased to see me, he said he wanted me to put the medication on his tongue for him.

Come, see him singing London Bridge circa late May 2010 :) 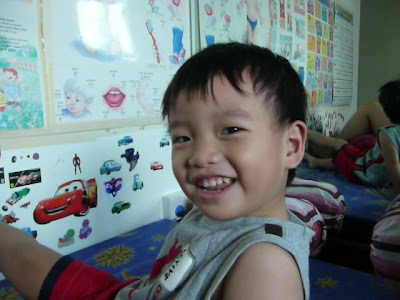 Isaac used to go "Lon and Bridge is falling down... my friend lady." I kept trying to correct him to say "London Bridge ... my fair lady." which took quite awhile before he registered it. In this video, if you listen carefully, he says "Lon and Bridge is falling down... my fair lady." - managed to correct the my 'fair' lady :)
pix & vid taken on 30th May 2010
Isaac @ 2 years almost 10 months
Posted by Pamela at 17:33