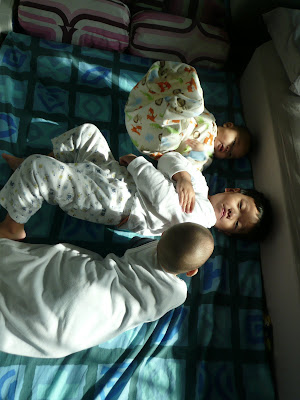 The twins both having fever now! Seems like they're teething again... and... seems like they'd develop a fever every time they sprout some teeth. sianz! We lucked out with Isaac - he doesn't have fever when his teeth emerges. But not so lucky with Asher & Shawna. Ah well :p 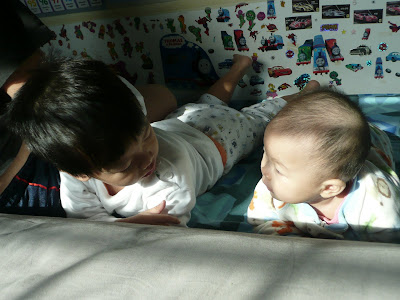 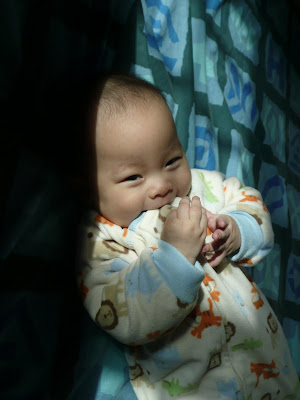 Asher, as you know, started sitting up later than Shawna did. But he loves to stand! Even now, he is either on his tummy, or he tries to stand up, with us holding him up by his shoulders, or he would use furniture to pull himself to a standing position. 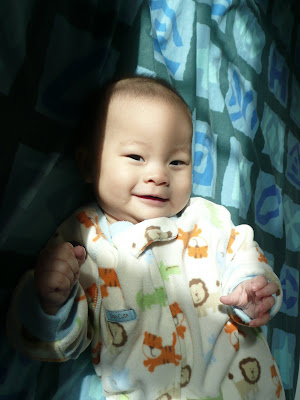 Shawna, now, she is power! 2 days ago, I saw her trying to stand!!! As in, she is sitting up on the mattress, and with no support from us nor from any furniture, she tries to use her leg power to stand!!! *eyes*popping*out* She is one fantastic baby!!! Trying to stand on her own at 9 months!? 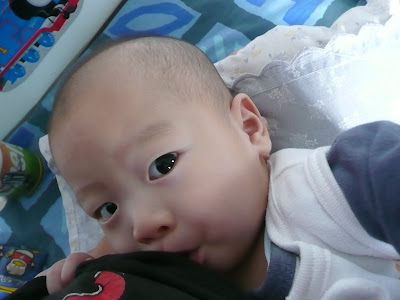 Here's my Asher drinking from me :) hehehe... I remember taking pix of Isaac in this exact same position :) Can you see my hand pump nearby? It's usually on standby as I pump when I latch on the babies - if they're not both latched on at the same time. 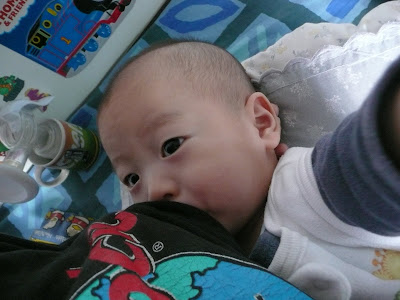 And look at what Asher is doing below? He is biting and pulling on my nipple!!! OUCH!!! ASHER!!! CANNOT BITE MUMMY!!! I always say to him, and Shawna, who also does that to me. Sob sob. When Isaac hears me say this, he would always look over, and say to me in a very concerned voice:"Mummy, Asher bite you?" and when I say "Yes, he bite me." Isaac will lecture Asher/Shawna:"Asher (or Shawna), you cannot bite Mummy, very painful you know." :) 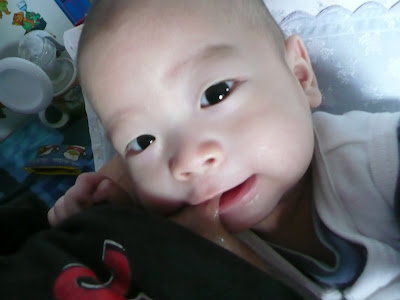 Shawna having her drink below ;p 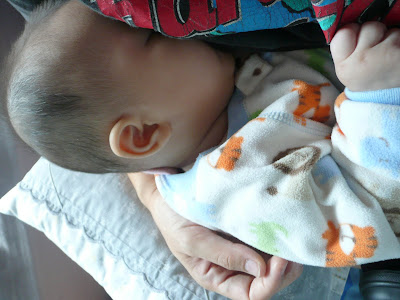 Isaac's wall of stickers is being enjoyed by Asher & Shawna now. They love looking at the stickers! 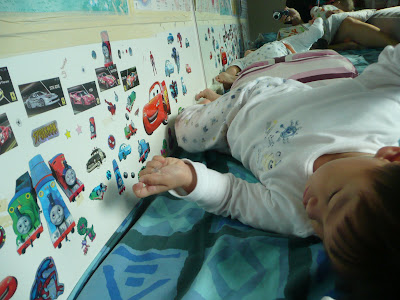 These are "sleeping bags" that I bought from Carters in USA, when we were there in Dec 2008. At that time, I wasn't pregnant, but I knew we would be as we were trying. I couldn't decide between a long sleeve sleeping bag and a short sleeve one - so I decided to buy two, one each. Also, I deliberately chose neutral colours so that whether boy or girl, also can wear. 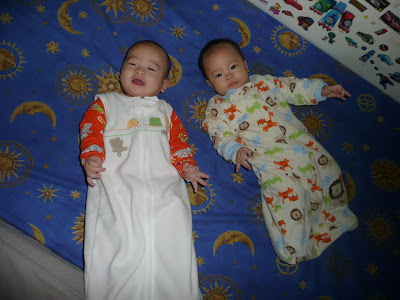 I remember at that time, in the shop, hubbs frowned at me and asked me why I was getting two when one was sufficient. But I waved away his queries with a "But you see the material so nice and soft!" Doesn't answer his question, I know, but, hey, I'm the one paying! So he just shook his head, rolled his eyes and let me be :p Well, now I know why I bought two!!! kekeke... 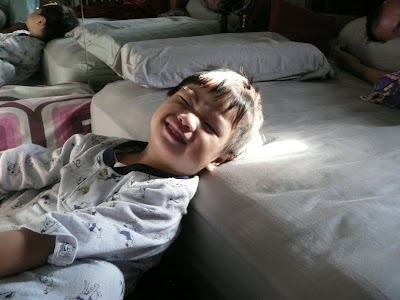