My twins are growing up!

Pix as of 11th July 2010 - but seriously, now at 10 months plus Asher and Shawna still look roughly like that - only... perhaps a little larger :) My Asher & Shawna, they're both smiley babies they are. We're very blessed that all our babies are smiley babies! 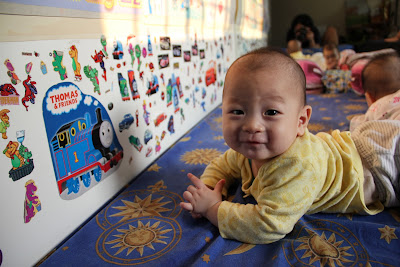 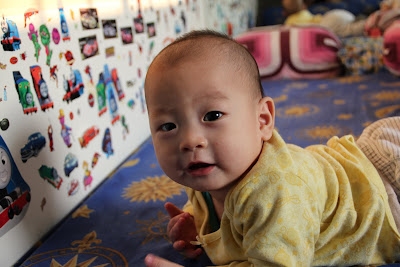 They're growing well too. Did I tell you that Shawna could wave goodbye? Well now, Asher can too! :) And they both can "High five!" as well! Asher is also currently very good at calling me. He would go "Mama, Mama, Mama!" in a very pleading tone of voice coz he wants me to carry him! Haha yeah, Lina, my helper, has taken to calling Asher "Manja" - coz Asher's always very manja and wants to be carried all the time :) 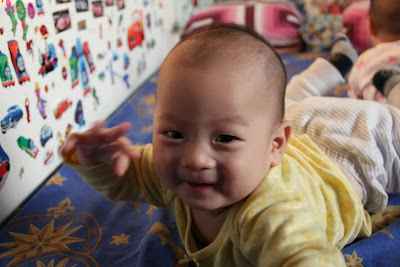 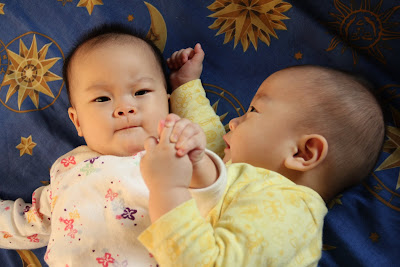 Oh and I did I tell you that Shawna is learnt to stand on her own? She's fantastic - she can now stand on her own, without holding on to anything for support! Apparently, she finds it amusing as well coz she is always showing us by standing up on her own. And from last week, she could even take 1 to 2 steps on her own! At 10 and a half months - Shawna has taken her first steps!!! cool huh!? :) 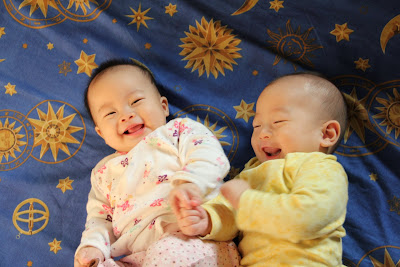 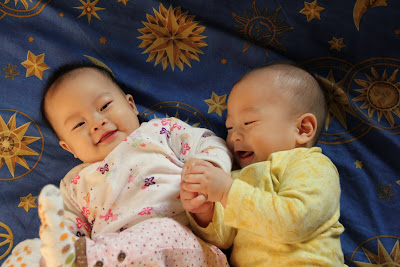 Asher has 4 teeth out - 2 above and 2 below. And Shawna has 5 teeth out - 2 above and 3 below. So, we know that another of Asher's bottom tooth is probably emerging soon. Size wise, Asher is definitely taller than Shawna, and he still looks bigger than Shawna. He is, but at last weigh-in, he was like 300 grammes heavier only, not like 1 kg heavier as he was before. People tend to point to Asher and say "This one looks bigger - he must be older!" Well, he IS older (he was born 1 minute before Shawna), but he was actually smaller (lighter and shorter) than Shawna at birth! Well just slightly - lighter by like 45 grammes and shorter by 1 cm or so. Not much difference, but still! you can't assume that size = age you know... ;p 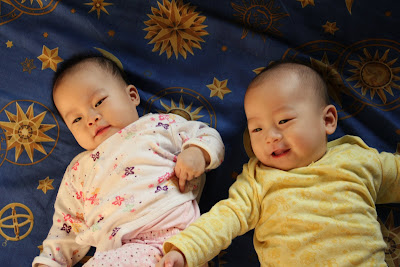 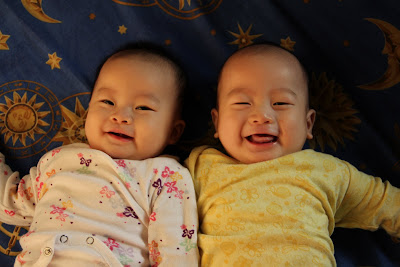 I love these pix! It's so hard to get good pix coz we always have our arms full and it's hard to find an opportune time to take pix. Glad we have some nice ones here though. But one thing I noticed is that most of my pix is taken in the bedroom - coz this is one place I feel safe to leave the kids on the bed while I wield my camera. This, versus Isaac's time when he had pix taken of him EVERYWHERE - like literally here, there, everywhere, doing this, that, anything! We just don't have the spare capacity now. Well hopefully when the twins can walk, then I would have spare arms to take pix :) 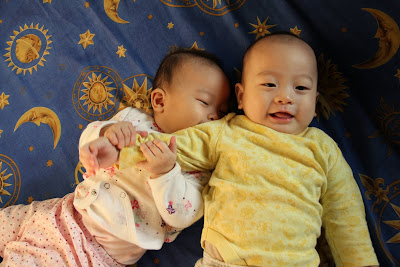 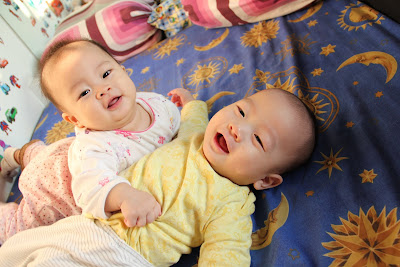 The kids love to fall all over each other, with Isaac too. The three of them would love to lie side by side, climbing over each other. We would allow them to, just sitting beside them and watching out to make sure the babies don't pull Isaac's hair, or poke his eyes or bite him (sometimes haha). And similarly, we have to make sure Isaac doesn't crush them with his body weight, or kick them or push them. 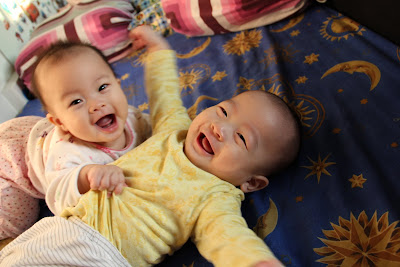 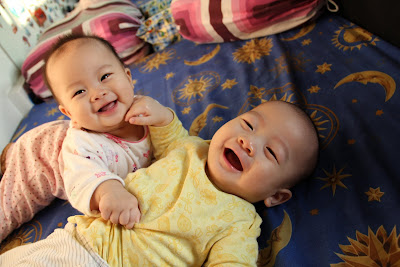