The first time I saw this pic, I'm like "Nice! But can see his armpit..." I thought it was just me. But then when I sent this pic to my sister as a shortlisted pic for her to do the annual photo calendar with, she said the same thing... "Oh, we used the nice armpit shot of Isaac." So here it is, The Armpit Shot. hiak hiak hiak 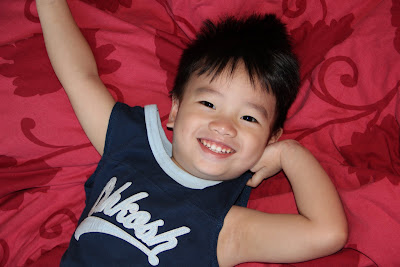 pix as of 31st July 2010
Isaac @ a week to 3 years old
Many people have been commenting that Isaac looks different from when he was young. Most say that he looks more handsome now. (or as Teacher Surinder says "So hensemnn, Isaac Tan!") Being handsome is a great bonus, of course. Though, I've never really prayed for it. I usually pray for the kids to have good health and to be smart and hardworking, to be filial and faithful, and also... not to be ugly. Don't be ugly can already, no need to be handsome or beautiful. But we're very blessed, God give us big bonus :)

Maybe I'm a rare species. I'd rather Isaac grows up more geeky-like than himbo-like. I used to think anyone and everyone would think this way. But I have come to realise that that is so not true. So maybe coz I am more geeky-fied than the other extreme, so I prefer this so. Intelligence over looks, I guess :p

So Isaac, please remember, no bimbos, please. No bimbos.
Posted by Pamela at 23:49