These below, are robots. It was one of the parent involvement project that we were supposed to do, together with Isaac. Guess which one did we make? hehehe... it's the Donald Duck lookalike! We didn't intentionally make him out to look like Donald Duck, it just happened! :) 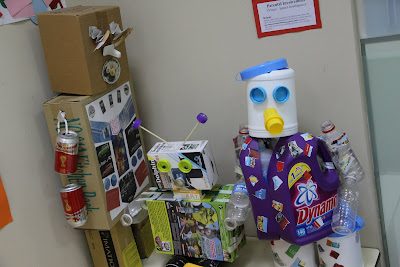 I must confess that I had a great time making this robot. We were supposed to use recycled materials to construct a robot. We used 2 Meiji milk cartons(its body, behind the chest), a Dynamo bottle split down its middle (its chest), 3 wet wipes containers (2 for its legs, and 1 for the head), 4 mineral water bottles (for its arms) and some bottle caps and the like for its eyes and nose.

Incidentally (or not!) there are two brothers in Isaac's school named Ryan and Daryl. They are both older than Isaac. But for some unknown reason, Isaac constantly talks about Daryl, and says he plays with Daryl, and if I ask him whether he (Isaac) has any "kor kors", he says "Have! Daryl Kor Kor!" But yet, when I ask his school teachers about it, they say that Isaac hardly gets to play with Daryl coz they're different age and hence in different classes. *shrug* weird huh! 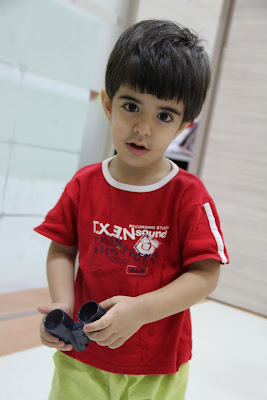 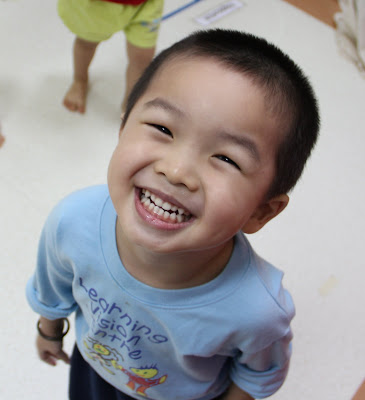 Arash & Cheng How. Cheng How loves to pose for the camera! :) Below is a pic of the kids before they started singing Singapura! They have been 'training' for the upcoming National Day celebrations on 9th August. Click here to view a video of them singing & dancing to Singapura! 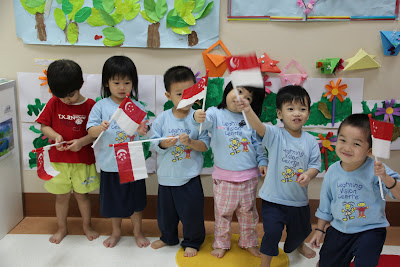 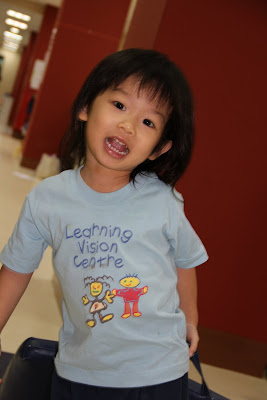 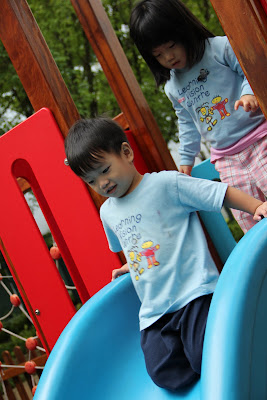 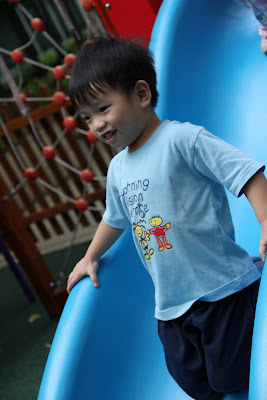 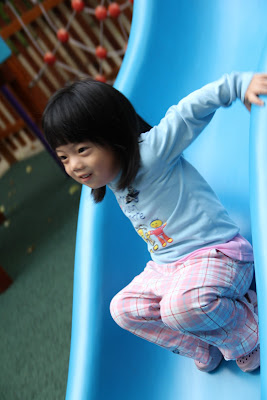 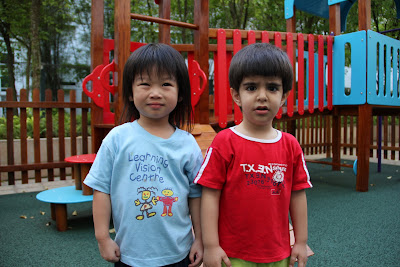 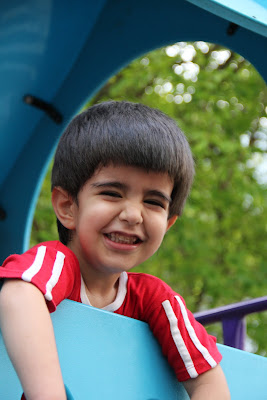 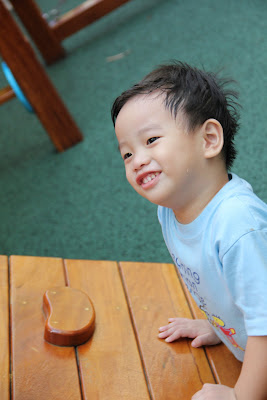 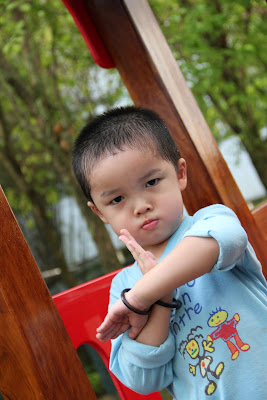 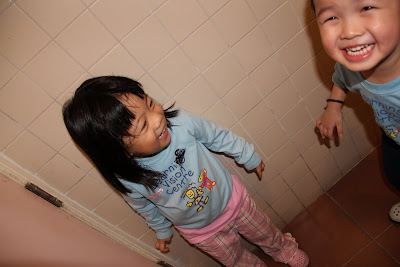 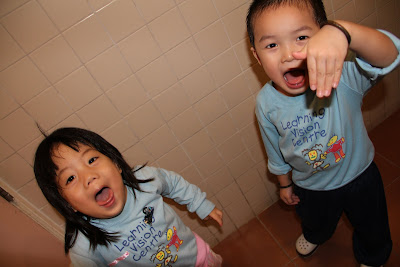 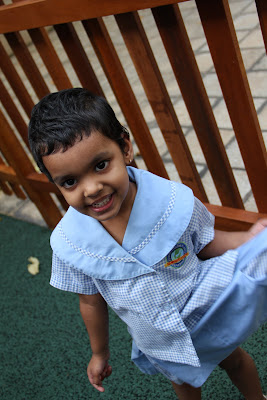 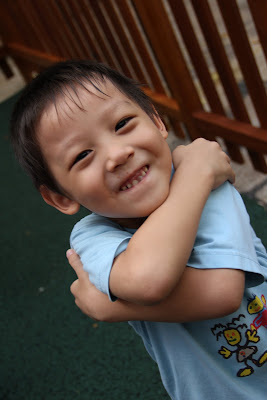 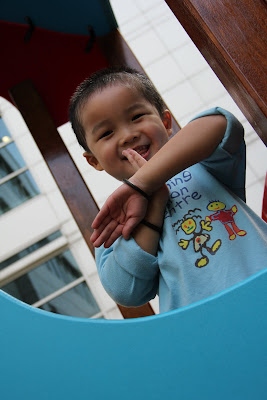 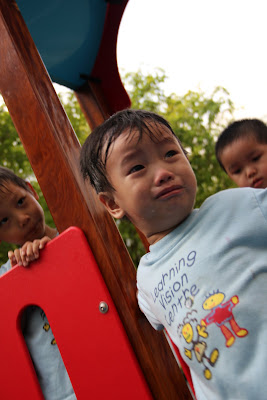 Isaac crying... can't recall what about. He's always throwing tantrums when we're around. Teacher Lina says he isn't like that in school. But at home, or when hubbs and I are around, Isaac tends to throw tantrums quite a bit. It irritates us to no end. And we don't exactly give in to him either - so why is he behaving like that?! Sighz. Hubbs has taken to implementing the Naughty Corner. Occasionally, Isaac gets smacked on his bum too, by hubbs. And when hubbs smacks, it's really quite hard. One time, I could make out his handprint on Isaac's bum. But thankfully, Isaac doesn't get smacked very often. 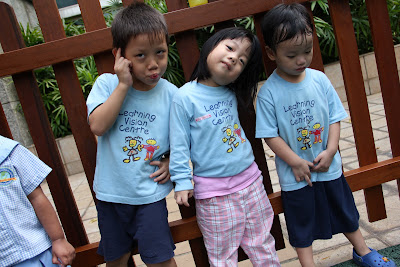 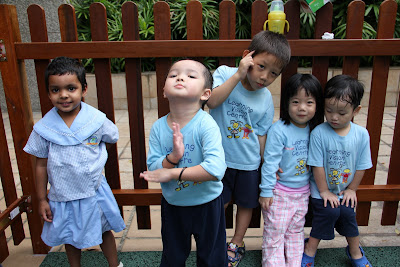 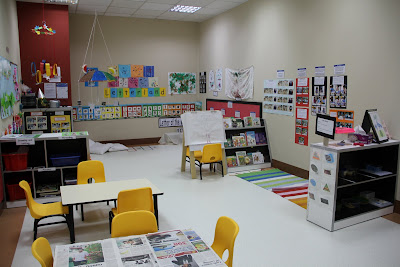 Above is Isaac's classroom N1 My Apron 2010. In 2011, they shifted to another classroom, which was open in nature. In the beginning when we sent Isaac to childcare, we heard that open classrooms were not too good and hence arranged for Isaac to be in the class that would be in a proper room, like above. However, as time went by, we realised that it doess't really matter. The kids do not seem distracted like we thought they'd be in an 'open concept' classroom. 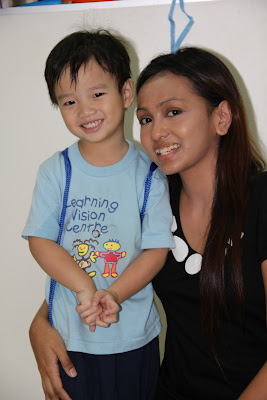 Isaac and his favourite Teacher Lina! :) This is such a nice picture - if you ignore Isaac's messy hair! :p
Posted by Pamela at 16:23